Nostalgia is a heady thing, and this summer has seen the revival of one of the best loved bygone eras of the late 80’s/early 90’s. Stepping into the limelight is the Madchester scene and, as it’s name would suggest, its all about the memories, the sounds, the clothes and most importantly the music that was pouring out of the city of Manchester. Britains defining youth culture of the late 80’s/early 90’s brought us the likes of The Stone Roses, Happy Monday and Inspiral Carpets, it bought us Wrangler flares and bucket hats and it brought us that euphoric feeling of ‘living for the weekend’. This November, North Country Boys and Butlins live music weekends presents Shiiine On Weekender, a celebration of indie and dance from the late 80’s, early 90’s and beyond. Bringing you the artists that soundtracked the golden period in popular culture, when clubbers and gig goers came together in what seemed like a glorious decade long party. Hitting the stage over the course of the epic three night weekend will be the artists that had number one albums, packed out stadiums and arenas and are still just as important today (and effing brilliant) as they were back in the day. The amazing line up includes Happy Mondays, Inspiral Carpets, The Wonder Stuff, The Farm, Stereo MC‘s and many, many more! There will also be pool parties, film screenings, amazing DJ sets and a chance to check out the best new bands on the Cooking Soup New Act Stage.

In ode to the countdown for this not to be missed weekender, we take a look at 10 of the best Madchester Anthems. See you at the stage, yeah?! 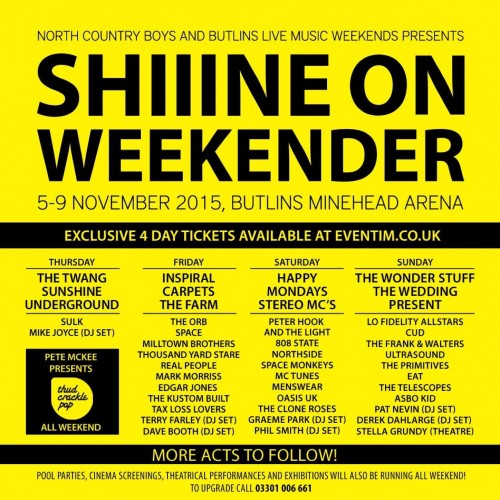 ‘She Bangs the Drums’ – The Stone Roses
Funny how things come around again, or is it that they were just timeless to begin with? In 1989 (we’re talking 1989 way before Taylor Swift claimed it) The Stone Roses were where it was at. Despite saying “were”, it should be noted that ‘She Bangs The Drums’ would not sound out of place in the indie charts today. Its euphoric, dreamlike sensibility means that after all these years, it’s still one of those songs you can spin round to at 3am, in a haze of first time love in pop perfection. She Bangs The Drums captures life’s blurry nights of naivety with a good dose of melody, THAT classic guitar sound and just enough rose tint on the glasses. Also – can I just point out the reverb on the drums? Killer. “The past was yours but the future’s mine” if you ever lose that feeling, at least you know what to turn up. Loud.- Daisy Taplin

‘Step On’ – Happy Mondays
The true heirs of the loose-limbed, baggy wave that engulfed Madchester, The Happy Mondays were perhaps the group that epitomized the movement the most. With Shaun Ryder’s Manc leer, talent for street-smart social commentary and an ear for the funkiest grooves, Step On, in particular was the clarion call for any hedonist. Propelled by their ecstasy-fuelled dancing mascot Bez and a winning phrase in the shape of “you’re twisting my melon man”, the band would come to embody all the working class scoundrels out there –Harley Cassidy

‘The Only One I Know’ – The Charlatans
More guitar defined than their maverick peers, The Charlatans music was rooted in 60s UK R n’ B and their credentials originally lay in the West Midlands. The Only One I Know, perhaps their best-known single, unearthed them as a band who could write great track after great track all whilst emitting the classic swagger and arrogance that signified the era. A funky dose of psychedelic pop, ‘The Only I Know’ is implanted deeply in any current indie bands DNA- Harley Cassidy

‘Perfume (Loved Up)’ – Paris Angels
Paris Angels were a seven piece from Ashton-Under-Lyme who became a staple on the Manchester music scene as it moved towards Acid House and “Madchester”. As regulars in the Hacienda it is no surprise their music was reminiscent of the sounds going on within the Whitworth Street building. The pinnacle for them was their 1990 release ‘Perfume (Loved Up)’. The track only made 55 in the national charts but its instantly recognisable trippy aceeed intro, 60s jangly guitars and dual Rikki Turner / Jane Gill vocals make it a favourite to this day of many of the regulars from back in the day. (Jonny Wilson – I’m looking at you). The track (which still gets regular airplay on 6 Music) is lifted from the bands only long player ‘Sundew’ with a follow up recorded but never released by Virgin. Following a brief reformation in 2012 for a charity show to raise funds towards the funeral costs of their drummer Si Worral’ there is hope yet that we might hear more from this legendary outfit…

‘Pacific State’ – 808 State
A complete landmark in British house music, Pacific State is without doubt one of the most sublime pieces of music that came out of the fertile Madchester scene. Oozing with jazz-fusion and exotica, it’s most notable for it’s mesmerizing, sax call and ambient, Balearic groove. The song descended at a time when acid house was infiltrating clubs around the UK and spawning a new generation of techno-heads to get loose and feel the music- Harley Cassidy

You know a song is going to be a corker when it has the power and prowess of Madness’ own Suggs behind its production, and with that hypnotic guitar hook, Groovy Train by The Farm is an undeniable classic. Easily The Farm’s most successful song after All Together Now, its notion of vigour led by a beautiful, synth sound, carries it to the dizzying heights of the untouchable 90s. It probably hasn’t dated as well as the others on this list but you couldn’t deny The Farm’s natural understanding of Madchester, even if they were from Liverpool. The lyric, “what happened to the attitude, where you broke all the rules?” best encapsulates the movement where things seemed a little more nonchalant.The video, almost as iconic as the track, was filmed at Pleasureland Southport, and features a cameo from actor Bill Dean. Even now when you listen to Groovy Train you can almost see the hysteria, the sweaty faces, the loss of inhibitions from those dance moves that would have been showcased in the finest of Ibiza’s clubs, all the way to Manchester’s homegrown pubs. Better yet, you can do it all again now.- KM/HC

This Is How It Feels – Inspiral Carpets

You can’t think 90’s without thinking Inspiral Carpets right?! “Husband don’t know what he’s done, Kids don’t know what’s wrong with mum/ She can’t say, they can’t see/ Putting it down to another bad day”. Heralded as a masterpiece, This Is How It Feels’ is immediately recognised via its whimsical intro, sounding less dance and more heartfelt, resounding all the way to the football stadiums. It sounded bright-eyed and innocent compared to all the other songs oozing out of the scene and that’s perhaps where the Inspiral Carpets struck gold. In time, the band have developed a cult following, heightened by keyboardist Clint Boon’s stint as an XFM DJ and all round leader of the “Boon Army”. Their infamous “Cool As Fuck” T-shirts still embody the spirit of the late-80s, proving that the Inspiral Carpet’s refuse to shake the scene that gave as much as it took.  Their cheeky liveliness, relatable anthemic lyrics and some of those unquestionably powerfully melodic guitar riffs make for the band that are wrongfully often overlooked. Arguably having suffered under the shadows of the Stone Roses, Inspiral Carpets represent the true grittiness of the outsider era that Madchester hysteria was all about. This is How It Feels is one of those tracks that simply never dates.- KM/HC

‘Strawberry Fields Forever’  – Candy Flip
The band were originally known as Yin Yang before changing their name to Candy Flip (drug references probably to align them with the ravey acid house scene). I loved the way that they took a track from liverpudlian immortal musicians, The Beatles, and gave it an electronic twist to slot them into the Madchester scene. However, unlike the Famous four, Candy Flip just faded away. Their finite appeal meant that the band lived and died in Madchester. ‘Strawberry Fields Forever’ spent eight weeks in the Top 40, peaking at number three. A success that was not repeated again for them though the band members have gone on to be involved in various music projects including producing. The song has its critics – what band or song doesn’t? However it has since gone on to become a rave classic and passes the ‘Bez test’ of Madchester anthems (and that is the musical equivalent of the Kitemark for me). While Candy Flip did not last forever, the 12 inch version of this record sits firmly on my shelf more than two decades later, still played and still appreciated and is that not what makes an anthem? Mary B

‘Fools Gold’ – The Stone Roses
Madchester’s defining anthem was initially conceived as the b-side to ‘What the World Is Waiting For’, until the band were urged to give the song top billing. An appearance on Top of the Pops with fellow Mancunians Happy Mondays was all that the band needed to ferment the top track firmly into a game changing anthem, regarded as a “cultural high-water mark”. Making the emerging Madchester scene go viral and popularising the new dance orientated music genre ‘baggy’ to a prime time audience,  The Stone Roses gave Madchester  its first defining moment- Paul Sng

‘Voodoo Ray’ – A Guy Called Gerald
Hailed widely as the first British acid house single, Voodoo Ray is everything a great dance track should be and more. It’s inexplicably exciting, hypnotic and joyous all at once and it’s hard to imagine it not being a mainstay floor filler at the Hacienda, even being featured in the film 24 Hour Party People. It’s tribal beat is built around voice samples from comedians Peter Cook and Dudley Moore, whilst the main, lynchpin soul vocal was sung by Nicola Collier, proving that house could only be heightened by luxurious singing.- Harley Cassidy

GET YOUR TICKETS FOR SHIINE ON WEEKENDER HERE