With over 300 acts squeezed into 3 days, Liverpool Sound City is the king of metropolitan festivals. This was Gigslutz first visit to Sound City and we have to admit to being slightly apprehensive going into it. All our fears were put to bed as soon as we realised the press area had a free bar and the person next to me supping half a bitter was Andrew Loog Oldham…

Every music venue in the musically historic city was taken over by Sound City and then some with disused garages and Cathedrals being turned into venues for the weekend. It felt slightly wrong seeing a bar set up at the back of a church whilst people coming out the toilet cubicles in pairs in the same place was also slightly bizarre.

First up was Thursday and this day turned out to be the highlight of the weekend, in terms of the amount of quality bands we saw.  Following catching local lot Cold Shoulder at the Black E stage we ventured down Seel Street to the Zanzibar to somehow squeeze in to see Swim Deep. This one was obviously a must see for a lot of the punters as the place was well over capacity but Swim Deep did not disappoint with their energetic raucous sounding surfer rock.

We took the decision to swerve The Cathedral headliners and a potential snooze fest with Noah & The Whale and instead we tucked ourselves into the Art Academy to see the very impressive Findlay. More on her below…. Following Findlay we caught the beginning of Reverend & The Maker however our I phone App’s beeped to tell us Aluna George was about to come on over in The Garage. It would’ve been good to catch the full Reverend set but we had been looking forward to seeing Aluna George since they burst onto the scene at the back end of last year. It has to be said though, that it was a slight let down. Although the tunes in themselves sounded ok, the sound itself was somewhat weak and one dimensional. 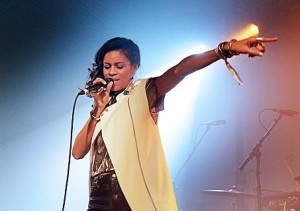 Following Aluna George was Bastille who were surprisingly good and had the younger element of the crowd in raptures with their cover of ‘Rhythm of the Night’. As they wrapped their set up with the uber popular ‘Pompeii’ we realised it was nearly 3am and time to call an end to a successful first day.

Friday started with us researching hangover cures to no avail. Luckily Sound City does not kick into life until the evening so you can watch a bit of This Morning and have excessive amounts of PG Tips whilst prepping yourself to hit the town again. First up on Friday was a visit to The Epstein Theatre which is a beautiful recently refurbished music hall. Back in the day, it was the Neptune Theatre until it fell into disrepair reopening looking splendid in 2012. I was here to hear Andrew Loog Oldham in the closing keynote interview with Dave Haslam. Loog Oldham was clearly on a wind up disagreeing with everything that Haslam was saying much to his disgust. After being told tales of the Rolling Stones back in the day we were nicely prepped for some more live rock n roll.

A quick dodge past the Black E stage which was curated by the lads from The Anfield Wrap saw Gigslutz join in a passionate and intelligent debate on all things football. This was followed by popping into Melo Melo to watch The Dirty Rivers. This lot impressed massively. The magic of events such of Sound City is bumping into random bands and finding hidden gems you would not normally see and The Dirty Rivers were one. As were the equally impressive Sugamen. 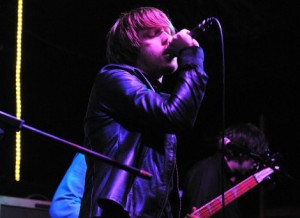 We caught a glimpse of Concrete Knives in The Kazimir Gardens who looked like they were going to have a storming set but we had to leave early to make sure we were inside Leaf Café in time to catch Temples. Catch them we did and they turned out to be the highlight of the weekend. This band for me is miles ahead of anyone else at the moment. Whilst the hype surrounds the likes of The Strypes and the Birmingham scene setters Peace and Swim Deep for me Temples are miles in front when it comes to ‘the next big thing’. Their psychedelic rock blew the roof off Leaf and left the crowd open mouthed. They have it all and are destined to become massive. They are thoroughly nice lads too having enjoyed a bit of a natter with them back stage. We managed to catch a bit of the Tea Street Band on the way home to round off another cracking day. 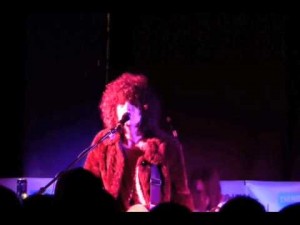 Saturday again saw hangovers nursed fir the majority of the morning and afternoon. In fact it was tempting to give the whole thing a miss and stay on the couch watching football but the Dexy’s were in town and were a band I needed to tick off the list.  After 1999’s horrific ‘lingerie’ episode I thought the chance to see Dexy’s (ne Midnight Runners) had passed so we were excited to see them play in the 5th largest Cathedral in the world.

They started an epic 2 and a half hour set at 8.30 pm and it became obvious from the off that this was more of a ‘show’ than a gig. The whole of new day ‘One Day I’m Gonna Soar’ was acted out. And although I’m no expert on the acting side of things I would have said this was choreographed pretty good and there is no denying Rowland’s has a fantastic voice. It certainly seemed so to us, although at the same time I doubt Johnny Depp is shitting himself just yet. There was no ‘Geno’ or ‘Eileen’ which was a shame, and also being stood up watching what the play being acted out for two and a half hours was not what my hangover needed but it was still a good experience and I’d probably be up for seeing them again should they continue to tour. 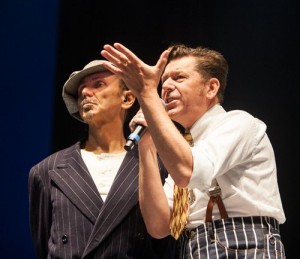 Saturday was finished off in mellow fashion off back in Leaf café where we caught Fossil Collective who brought with them a good solid following.  Opening with ‘Under My Arrest’, they went on to play a set which was crammed full of niceties from their debut album ‘Tell Where I Lie’ whilst ‘The Magpie’ was a particular highlight.

And that was that. As the festival ended on a Saturday which gave us the Sunday and bank holiday Monday to recover. What brilliant planning Liverpool Sound City! All in all this was a massive success.

Previous years at Liverpool Sound City have featured acts such as Florence & The Machine and Mumford & Son’s just before they broke there is a good chance there would be hidden gems on show. Here are our 5 top tips from what we witnessed;

We’ve been hearing good things about Findlay for a good while now and the tunes all sounded good we managed to hear so far.  Watching her live though confirmed our thoughts. She is brilliant with an absolutely killer voice. Move over Mossheart and Ladyhawke, there is a new Queen of cool in town.

Check her out if you can. There are a couple of tour dates coming up and you can download ‘Off and On’ for free from her official website

This Liverpool band has it all. Signed up to Dletasonic who brought us the like of The Coral and The Zutons, they will be causing havoc in a town near you soon we are sure. These are proper bollocks out rock n roll. Think Oasis, BMRC and Kasabian. They have been backed by This Feeling club night and we have a feeling they are going to be massive

Cold Shoulder were another Scouse band to grab our attention. Forming from the ashes of cult Liverpool bands The Black Velvets & The Aeroplanes, the three piece make a hell of a racket with tight as fuck playing, fat riffs and classic harmonies. They’ve also recently landed a support slot with Neil Young!

Their latest single, double A side ‘She Lay Me Down In Shades Of Green’ and ‘Tears For Me’ is out this week and it is “boss, la”.

The Reading band shook us up out of our hangovers with their melodic shoe gaze. Check out their track ‘Emerald’ for further listening.

This lot were right up our street. Keep an eye out for them. More shoe gaze, although more from My Bloody Valentine side of the road, than say Slowdrive. Expect to be hearing more form these.