Friday 25th January Bring Me, dropped their sixth studio album Amo and its not what anyone expected.

Stapled as a hardcore metal band, Bring Me’s first few albums have all pretty much embodied these genres. Come the release of their new 2019 album, Amo fuses dub bass lines, with electronic beats and screamo lyrics. A sound we haven’t heard from the band yet.

Whilst Amo has the potential to alienate a lot of original BMTH fans, it also has the potential to gain them a whole new audience. The tracklist is pretty much everything but the old Bring Me, with the band looking to transgress past their roots and why not do that in the new year? Amo sizzles in influences from The Prodigy, to Slaves, but doesn’t neglect alternative-rock tendencies. 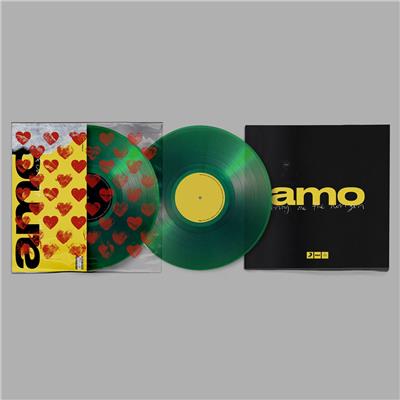 Opening with, ‘I apologise If You Feel Something,’ the ambient sounds in this track create a tranquillising effect, furthered by the slightly auto tuned vocals from frontman Oli Sykes. Psychedelic, yet nonchalant, ‘IAIYFS,’ marks the beginning of a new BMTH, I’m not sure anyone was quite ready for.

“Ooh, ive done it again,” sings Sykes in fourth track, ‘In The Dark.’ An obvious miss of what could’ve been an amazing Britney reference. Otherwise, ‘In The Dark,’ rocks easy going chord patterns, with hook ridden lyrics and a punching drop.

In the beginning of their career BMTH released thunderous deathcore tracks, ‘It Never Ends,’ ‘Pray for Plagues,’ and more. But after their fifth studio album That’s The Spirit, they fell straight into the mainstream bubble of soft-rock meets EDM. Amo however, still plays around with these traits albeit more tastefully – specifically in tracks, ‘Mother Tongue,’ and, ‘Medicine.’

‘Sugar, Honey, Iced-Tea,’ track eight sugar coats the s*** out of this album. Easily the standout of the set, ‘SHIT,’ bounces infectious riffs with playful lyrics.

Penultimate track, ‘Heavy Metal,’ featuring Rahzel is a prime example of the rock, electronic rap collaboration that is enjoying a healthy resurgence at the moment. We’ve seen it in artists like Linkin Park, PRXJEK, Syringe and more, marrying screamo vocals with genres like hip-hop, trap, EDM and so on. Throughout this cut the group focus on a predominantly drum and bass backdrop, towards the end Sykes screams the last vocal, “no this ain’t heavy metal,” which is an interesting play on this track – and also the theme of the album all together.

Whilst others may complain Amo is more mainstream, BMTH have been mainstream since their 2012 album That’s The Spirit as they switched from heavy metal tracks like, ‘I used to Sleep With Medusa (Count Your Blessings album) to, ‘Oh No,’ (That’s the Spirit) a track that’s sounds like it was composed by Metro Statiohn. Whilst Amo angles a different side to Bring Me, I think these tracks are going to create big moments at the festivals they’re playing this year.

#Bigin2019 This Feeling Track of the Day : The Dead Freights ‘Reasons and Walls’