Courteeners fourth studio album Concrete Love tastes like having a dish at a restaurant for the second time – it’s not as good as you remember. The whole album feels very much like it wasn’t left to cook for long enough and this is validated by frontman Liam Fray’s admission “I wrote it in five minutes!” about lead single ‘Summer’. Don’t get me wrong, there are a few belters but far more ‘filler’ tracks than there were in previous albums, ‘St Jude’, ‘Falcon’ and ‘Anna’. I’m still hungry after eating it.

‘White Horses’ is an experimental track that has a psychedelic, sexy groove to it. This is marred when Fray starts singing, the echo effect on his vocal makes the track seem fuzzy and its overarching message is lost on the listener. It’s not a great start to the record. This fades into silence and ‘How Good It Was’ jars you awake. It’s a nostalgic exploration of a crush from days gone by, one of the few mightier tracks on this album. It boasts pace thanks to Michael Campbell’s confident beat and the melody is incontestably catchy. It’s one that you can imagine jumping along to like a loony at one of the crazy live shows the band are synonymous with.

‘Small Bones’ turns things down a notch. Liam Fray (having studied Creative Writing at the University of Salford) is well known for writing beautiful lyrics. This is a pertinent exploration of “medium distance romance” and the trouble that geography can play in the battlefield of love. This track certainly feels like a march, with the repetition of “when she’s asking me to dance” paired with the drum beat. This track feels full bodied and sincere – when Fray sings “break the law to catch her eye” we very much believe he would.

Opening with a mess of a vocal haze ‘Has He Told You That He Loves You Yet’ is saved when a reverberating guitar melody and tambourine take over. This feels like a song about a man very much in love with a female friend who gets the delight of sitting and listening to her relationship woes. Our protagonist recognises that some men are no good “I know what he’s thinking” and that “this is not the fairytale that you asked for”. The line “Has he told you that he loves you yet? / I’m just worried that you’ll get used again” is sung with tenderness and fragility which contributes to this song sounding very much like the hug that your Mum gave you whenever you got a scrape or bruise as a kid. It’s comforting, and makes you feel warm and fuzzy inside. Yet at the same time it’s a warning to all those girls who know a relationship is doomed from the start “it’s written on your face” yet try to make something of it anyway, only to get their heartbroken further down the line. The ‘get out girl’ backing vocal sounds like a group of friends echoing the advice of the male friend, falling on deaf ears. It’s a wholly satisfying track and without a doubt my favourite from this album. If they don’t play it at Leeds Festival this weekend I’ll be incredibly disappointed!

‘Black & Blue’ is a return to the angsty parcels of sound that Falcon and St Jude are full of. However as Fray sings “it’s getting harder every time” my mind can’t help but think how pertinent this declaration is. It’s certainly becoming increasingly harder for The Courteeners to sound original with each new song they write. If they aren’t careful they face becoming predictable, boring songwriters and performers and this song serves to epitomise this risk. ‘International’ has the swirling, sleepy tone that tracks like ‘That Kiss’ and ‘When You Want Something You Can’t Have’ depend upon. It’s lacking the anthemic chorus that these tracks both boast, though.

‘Next Time You Call’ wakes you up from having nodded off with its screeching opening riff. The beat lends itself naturally to swaggering down the street, man on a mission style and it’s repeated “I hate your love” makes the track sound sexy in the same manner of The Arctics’ ‘Do I Wanna Know’. It’s slightly Reverend & the Makers-esque in that it’s relatively simplistic lyrically – but this is certainly a positive as it is incontestably catchy and one of the albums more durable tracks. ‘Summer’ certainly sounds like kicking back in a deckchair, beer in your hand. It’s catchy, bouncey and smells like sun lotion. You can imagine throwing your hands up and dancing around without a care in the world on a beach somewhere tropical and as Fray croons “one more day” you can’t help but wish your holiday was one day longer. You might be wishing your holiday could be dragged out but that’s certainly not a thought that’s extended to this song; by its conclusion it feels very tired and lethargic. The novelty of it wears off, much like the concept of all-inclusive ice-cream by the last day of your holiday.

‘Saboteur’ does the very opposite of ruin things: it picks The Courteeners up from the floor and gives them a good shake. The vocal is electronic, robotic and full of pace and purpose until the chorus “she was a saboteur” which is sang with elongated syllables which lends the track a psychedelic haze. The keyboard is a nice touch and gifts the song something that the other tracks lack. ‘Dreamers’ makes you feel like you’re on a train chugging along through an expanse of countryside. You’re sat looking out of the window of the carriage and Fray’s monotonous drawl is tantamount to your internal thought process. You can barely hear what he’s saying over the sound of the melody that sounds exactly like a train pumping its pistons. It’s the sort of noise that gives you a migraine if you’re tired. It’s certainly not a song about aspirations and achieving, like its title would suggest.

Closing track ‘Beautiful Heads’ starts with a chord sequence that sounds like a Sunday church service but ends up sounding like a teenager trying to spell out their feelings over text message. It’s message is clumsy but beautiful “It’s not just your beautiful / it’s not just your beautiful head / that makes me feel this way”. Liam Fray isn’t a teenager yet he has the capacity to write about the angst that we’ve all felt at some point or another with regard to another person. This track is a song about people, rather than a song for people – one of the rallying cries to the masses – that The Courteeners from a few years ago may have written. It sounds like growing up: it’s paradoxically sad and joyous.

Maybe a more suitable noun to crown these tracks would be ‘Grout’ in the place of ‘Concrete’: for the majority of the stuff on this record simply fills the gaps between the anthemic Courteeners tunes such as ‘Not Nineteen Forever’ and ‘No You Didn’t, No You Don’t’. It’s with regret I have to say I much rather have waited another couple of months, maybe even a year or two, to hear something other than this. Liam Fray is said to be a fan of “that kitchen sink style of writing” and I can’t help feel like he’s taken this enthusiasm a bit too far: ‘Concrete Love’ is like a kitchen sink alright, but one that’s full of dirty dishwater. Sure, there a few pieces of silverware at the bottom but you have to reach into muck to be able to get to them. 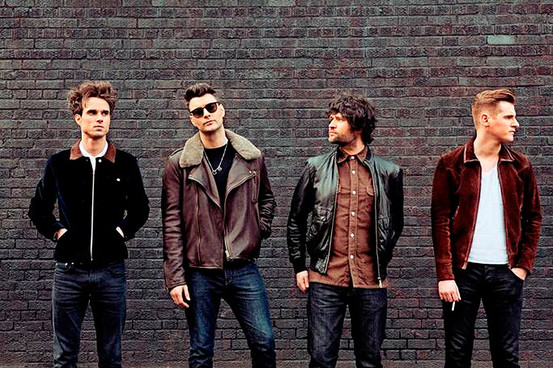