In the unlikely event that you’ve never heard of Motown, read no further; come back after you’ve read this article. (Actually, read it regardless of how much you know about Motown; it’ll only take a few minutes and you might even pick up some useful music trivia to help you win the next pub quiz.) 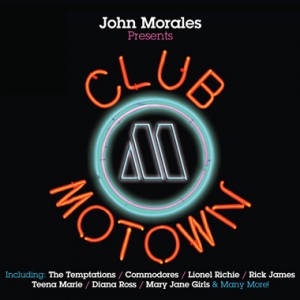 Like a well-known and reputable wood stain product, John Morales Presents: Club Motown does exactly what it says on the tin: the influential New York DJ and remixer has selected a bunch of 12 inch mixes (i.e. longer than the single or album versions) from Motown’s disco period in the late 70s and 80s. I was initially sceptical about this collection, mainly due to the vast number of Motown compilations that are already available: a quick perusal of a popular online retailer’s website reveals the extent to which this cash cow has been well and truly milked: Motown Anthems, The Nation’s Favourite Motown Songs, Motown Northern Soul, Total Motown, A Cellarful of Motown!, The NO.1 Motown Album, Motown Floorshakers, Motown Dogging Anthems*… the list is depressingly long. That said, many of the tracks on Mr Morales’s compilation have been out-of-print since they were first released (perhaps Universal uncovered them during a spring clean of their vaults, hidden amongst the stash of Bob Marley and Tupac recordings). If you have a burning desire to hear the extended 6 min 41 sec version of Lionel Richie’s ‘All Night Long’, or longer versions of Dennis Edwards’ ‘Don’t Look Any Further’, Rick James’s ‘Superfreak’ or The Temptations’ ‘Treat Her Like A Lady’, John Morales Presents: Club Motown will not disappoint. Morales has also included five remixes, including a version of Diana Ross’s ‘The Boss’, though the cynic in me questions whether this is just an exercise in vanity or simply the latest attempt to cash-in on the lucrative Motown name.