Manic Street Preachers return with their much anticipated follow up to last year's 'Rewind The Film'. Marching into a new landscape, 'Futurology' promises new inspirations in their Euro disco drenched sounds, yet still remind us where they came from.
Rating:

Last year Manic Street Preachers were taking a solemn approach to their past with the angst-ridden ‘Rewind The Film’ which took them back to Thatcher-era Blackwood, full of social decay and backwards politics. However less than a year later the Manics are marching abruptly into a post-modern world which they have made themselves comfortable in. Their love for post-modernist art has always played roles within previous album concepts, but as this album title glaringly states, ‘Futurology’ pays full homage to a European movement in all it’s sleek, electric visions.
Opening with the title track, ‘Futurology’ bursts in with airy optimism within the guitars as a backdrop to classic Wire penmanship in the lyrics: “We’ve all fallen prey, to keep the wolves at bay”. Crackling with electricity, Futurology is a strong, fast and furious opener but the biggest surprise comes in the fact that someone, somewhere has taught Nicky Wire how to sing.  Nineteen years have passed since the tragic disappearance of Richey Edwards, but the memories and love for the former Glamour Twin will never be in danger of fading as ‘Walk Me To The Bridge’ was originally seen by fans as a direct homage to Edwards. Despite lyrics such as “I re-imagine the steps you took, still blinded by your intellect” Wire has recently rather confusingly refuted these claims, stating that it was instead inspired by the Oresund Bridge, not the Severn Bridge where Edwards’ car was found nearby. However the track itself demonstrates the full potential of James Dean Bradfield’s talents on guitar and is set to be a fan favourite at future gigs with it’s pulsating beat.
I was lucky enough to be there when ‘Let’s Go To War’ received it’s debut airing at Brixton Academy as the crowd reacted with such rippling excitem 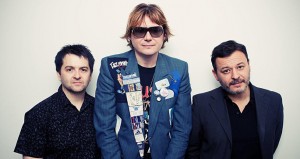 ent in what now feels like a lifetime ago back in April. Bradfield authoritatively leads the way in the stomping war chant as Cate Le Bon returns the favour with her backing vocals in a track fuelled by the Manic’s never-ending desire to change the world. The post-apocalyptic anthem contains a few ingredients of earlier work on Generation Terrorists within it’s mantra of love and hate, but is polished with a sinister, modern sheen within the synths and deep bass. Despite ‘Let’s Go To War’ containing the punk call to arms, which is not unknown for Manic Street Preachers, the track is still a turning point in a new direction so they still assure their fans ‘…we still love you‘ before taking the album’s sound into uncharted territory.
Nicky Wire reminds us all again of his degree in politics as they return to their favourite theme of Communism in ‘The Next Jet To Leave Moscow’, which is an element of familiarity in their new found landscape. European pop-disco builds up in the intro but is slowly tamed by keyboards, stripping it back to pave the way for eventual guitar dominance. If the future has a soundtrack it will most probably sound a lot like ‘Europa Geht Durch Mich’ (which translates to ‘Europe goes through me’). Nina Hoss lends her vocals to the rhythmic, minimalist track, which just like the German autobahns, is sleek and direct to the point as a homage to the inspiration which the band found in ‘European Dreams’.
Softening the album after the razor sharp edge of ‘Europa Geht Durch Mich’, ‘Divine Youth’ offers tranquility as a harmonious ballad. Featuring Georgia Ruth Williams’ angelic vocals and work on the harp, she offers a ying-yang quality as her voice is so pure within it’s femininity that when it is set against Bradfield’s masculine vocals, a masterpiece is created. With soft, pounding war drums ‘Divine Youth’ is a perfect midway point for the album.  ‘Sex, Power, Love and Money’ is Manic Street Preachers returning with full force in all their abrasive, Situationist slogans and glory. Again the guitar takes full force and dominance in a track that takes inspiration from 1980s synth drenched sounds.  With Bradfield so far showcasing his full talent on guitar, ‘Dreaming A City’ is Nicky Wire’s time to shine with an opening bass solo. Acting as Futurology’s intermission, an experiment is undertaken. Sean Moore’s work on the drums creates a marching tempo before it rises in all it’s optimism into an instrumental that would not be out of place in a 1980’s video arcade.

Following the high of ‘Dreaming A City’, ‘Black Square’ is the emotive low with it’s pulsating, echoing intro. The album’s concept of post-modernist, European art movements is justified here  “Art is never Modern, for art is eternal” Bradfield quotes against a gentle acoustic guitar. Ever since the dawn of Generation Terrorists, the Manics have indulged themselves in quotes from the Futurist Manifesto and so ‘Black Square’ explains their attraction in a stripped back manner, offering a breather in an otherwise vigorous album. Green Gartside’s Scritti Politti supported Manic Street Preachers on the Futurology tour and he grants us his vocals in ‘Between The Clock and The Bed’, taking you by surprise as it lends a soulful quality to a pop-synth ballad.

Germany is a country divided by traditions and modernity, and as the album’s concept has so far been seeped in the latter, you can’t help but think whether it was this division that was the inspiration behind the sound of ‘Misguided Missile’. Another synth heavy track of social disillusionment, the chorus erupts into a traditional sound of war drums and subtle guitar before the flow is interrupted by a sudden acoustic approach following the bridge, placing two opposing sounds into one song, and yet it strangely works.

‘The View From Stow Hill’ then succeeds in bringing a tranquil calm to the album before erupting into the craziness of the album’s instrumental, Eurodance outro ‘Mayakovsky’. A fitting conclusion named after the Soviet Futurist with a sound of jumbled layers of synth and guitar, demonstrating that despite having 12 albums under their belt, the Manic’s sound and inspiration will never become stale. Although Nicky Wire nearly always states that with each new album they’re trying something different, this time round the claim is almost an understatement.  Bradfield, Wire and Moore will always be the three men from Blackwood, forever disillusioned with the world and despite the disco-driven direction of Futurology, it does not let go of that mantra so fans’ don’t have to fear the possibility of either becoming isolated or putting up with a predictable album. ‘Futurology’ succeeds in striking a crucial balance between the two ends of the scale which is quite an amazing feat for a band that released their debut album 22 years ago.