Psychedlia takes a huge leap… well, not forward. That wouldn’t be very psychedelic. But a leap upwards, around and in between a rainbow-coloured solar flare with ‘Sun Structures’; the debut home-made album from Temples. Recorded in the box room of front man James Bagshaw’s house, the album is a kaleidoscopic collection of gems you’d be forgiven for thinking were lost and found (and remastered) dust covered outtakes from the 60s. While bands have been accused of attempting to recreate The Beatles’ sound ever since The Fab Four split, Temples have managed to capture key elements of their experimental years, while still sounding relevant to stand alongside the Tame Impalas and Horrors of today.

It’s an album powered by a machine of a drum and bass connection, creating the waves for those acidic audio hallucinations to ride. Opener ‘Shelter Song’ dips straight in with a riff that’s very nearly ‘Day Tripper’, but becomes Day Tripping with the echoed vocals and a wall-of-sound production. (How big was this box room?) As with ‘The Golden Throne’, there’s a melody not a million miles away from the Alex Turner book of song writing, with a to-and-fro vocal like those found on AM and a key-featuring faded outro. Could this be what the rumoured synthesizer-featuring future Arctic Monkeys album will sound like?

Recent single ‘Mesmerise’ is without a doubt the pinnacle of a strong collection: an “Instant Psychedlia’s Gonna Get You!” statement of a song, channelled between a slippery bass groove and notes that are difficult to distinguish between chiming guitar and sunshine-powered synths. In short, and as with all of the tracks, there’s a lot to hear within Temples’ music. While some bands song structures can appear linear (vocals over guitar over bass over drums), here are sounds that merge together. Despite the fact that there are moments where you can well believe that it was self-produced (by Bagshaw), it only adds to a depth that pros may have wanted to alter. You can bet that it’s an album worth forking out the extra few pounds to hear how rich it sounds on vinyl. 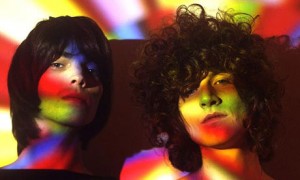 Of all of the new bands to release albums this year, this is the one that has the energy to set the festivals on fire. ‘Move With The Season’, ‘Colours To Life’ and ‘Sand Dance’ – with its two minute instrumental outro – could ring around a tent long after they’ve left the stage, swirling from stage to screen to ear to ear. ‘A Question Isn’t Answered’ – a hand clap intro that jumps into an almost country/rock drumbeat – is the most Lennon-esque track lyrically. “A question isn’t answered if an answer isn’t questioned,” “Past life brings the future when the future disappears.” It’s ‘Tomorrow Never Knows’, knowing that tomorrow needs to sound even more like space, and delivering it with glassy synths and vibrating vocals.

Noel Gallagher (no stranger to a Beatles comparison or two himself) is a big fan, and apparently angry that Temples aren’t receiving radio play. But perhaps this isn’t music to be played between pointless chats on the wireless. It’s an album to play in its entirety; to dance to with equally inebriated friends; to take in, to question and then to rethink it all again. It’s Django Django Untamed. It’s a question that isn’t answered, but for many it will be the answer.