"There are flashes of cleverness and original outlooks on previously over-discussed material..."
Rating:

It has often been said that with the greats of rap music, you can “feel” or “hear” their city in their work. Although clichéd, you can feel the pain, the struggle, the passion and, of course, the love. You can appreciate what it is that makes these urban metropolises the birthplaces of such creativity, inspiration and idolisation – think New York, LA, Compton, Chicago, Detroit, Toronto – none are without flaws but all, at some time or another, have been immortalised by the work of great wordsmiths and producers. 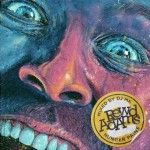 Rewd Adams’ Hunger Pains 2 is no different. Mixed by Dizzee Rascal’s DJ MK, the man also responsible for the hip hop voice on London’s ever influential Kiss 100, the frequent lyrical and underlying links to the UK’s capital are impossible to miss. That Kiss influence, by the way, is apparent from as early as the record’s second track – ‘Love Thing’ – the feel-good, head-bopping tune that seems tailor made for barbeques, cocktails and flip flops. Adams’ relaxed delivery of metaphor-packed bars like “He ignores them like autism, never comes up short like dwarfism, cleaning up bodies like morticians” blend well with the “I sleep with one eye open, feels like a dream that I found my way” hook that demands you singalong with him.

That tranquil, creamy vibe is one Adams adopts again for ‘Hair of the Dog’, his slightly shallow tribute to alcohol, on a soulful beat that grants him license to detail his apparently intimate relationship with the bottle. “Everybody’s in love with Mary Jane, but I’m sleeping at the bottom of the stairs again / Cos I get fucked up like every day, my liver’s not dead, let’s celebrate” he drawls, lusting after Hennessey as though it were a super model before Rinse arrives for the album’s only lyrical feature. His deformed voice lends a fresh, hilariously witty angle to the track, typified by his “Fucked up eating ice making sure I get every last sip / Wonder why I trip every night because my life’s like gay porn and I’m surrounded by dicks”.

‘Journey’ again exhibits Rewd’s ability to open up and deliver partially calculated ideas, but largely fails to obtain any identity besides being a wavy, dreamy segway from ‘Loyalty’, the Jetsun-produced record that manages exactly the opposite. On it, Adams calmly criticises the police, banks and drink drivers amongst other LDN wrongdoers, a mellow style which somehow possesses more weight than the now standard attack on society rappers continue to offer. “Stop and search laws [are] for fascists and racists / I will give it to you straight, I’ve got no patience” he sighs. It’s more ‘share a cigarette and discuss’ than ‘let’s smash David Cameron’s windows’, and that makes it an intuitively neoteric pleasure.

Towards the end of Hunger Pains 2, Adams then executes the complete transition of the turn-up, hype-fuelled ‘Apply Yourself’’. Where much of the LP is a stroll across his mind-set, the continuous drum and bass ensures an unwavering sprint through his self-motivation. “Living life we get stressed, heads above water so I guess, have to figure out what to do next / gotta keep moving, making steps”. It’s probably an overstatement to compare it to Kendrick’s ‘i’, but it would be fair to describe it as the UK’s answer to it; such is the self-confident, uplifting message of never giving up and overcoming challenges.

The album aptly climaxes with the London-centred ‘Wheels on the Bus’, a soulful, summarising production of the LP’s general aims of explaining life around the Thames. “You think we’re dumb, but us working class yeah we’re clued up / We live the life we’re forced to so we gotta get our loot up / That’s robbing, shotting, working 9 to 5s/ because you push it in our face, those materialistic lies”. Again the record is considered, sensitive and demonstrates his situational awareness, but somehow simultaneously seems to lack a spark to really make it a powerful, prophetic effort.

That judgment, sadly, is generally true of Hunger Pains 2. There are flashes of cleverness and original outlooks on previously over-discussed material ranging from alcohol and institutional racism, but the frustrating bottom line is that it failed to maintain its ability to engage the listener throughout, with some tracks acting as placeholders (like the randomly piano-embracing and cringe-inducing ‘YouNiVerse’). There’s no doubt that Rewd can spit or indeed that he can entertain, but over the course of the 12 tracks his creative stamina eluded him, to the impairment of HP2’s overall standard – and with British hip hop currently enjoying unpredecented acclaim, Adams falls below that frighteningly high bar.

ALBUM: The Staves ‘If I Was’