So, today is a going to be a good day. I can feel it in my bones. Already, I’ve managed to get my ass out of bed in time to have a leisurely swim and a soak. I’ve paid my rather large extras bill, which seems to have escalated somewhat, seeing as I didn’t leave my room yesterday. And, I have managed to get all my bags on the bus and stick on the coffee before anyone else has even set foot on it. I’m on a roll.

The next person to turn up is Robin, one of the backline techs. Wow, a good night’s rest seems to have done him a world of good as well because he’s looking rather cute today. Maybe he’s done something to his hair or something, but he’s looking might fine right now.

It would seem that Robin just chilled out yesterday as well so he’s on form today, too. He’s definitely growing on me, and I’m beginning to think that I might be a little attracted to him on the quiet. Well, there’s always one! We start chatting and passing the time, just sharing details of our families, recent tours, etc., and eventually everyone else starts to slowly get on the bus. I wish they could’ve taken a bit more time, because I’m quite enjoying Robin’s company right now. 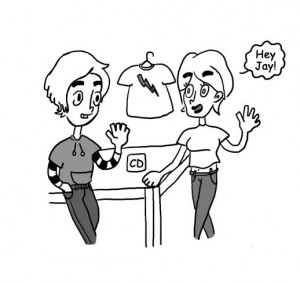 Anyhow, I suppose there are still ages to go until the end of the tour so there’s plenty of time for all that. I get my laptop out and start planning what I need to get off the truck, as tonight is quite a big venue and apparently it’s sold out so I will hopefully have a nice busy night.

The day seems to be passing quickly, and before I know it, its mid-afternoon and the support band has turned up. I find this out when I hear a familiar voice, and look up from the merch table.

To my utter surprise, it’s my ex-boyfriend, Jay.

Now, it’s fair to say that this is a completely unexpected turn but not wholly unwelcome. We still get on, and he’s still cute. I wonder idly if he’s single.

“Hi there, handsome! Don’t tell me you’re our support!”

“For one night only.”

Apparently, Jay’s band is on tour in Europe as well, but they’re not doing any other gigs with us. I immediately start to wonder if we might be in any cities on the same day, though, especially our days off.

“So how long are you on tour for, Jay? You been out long already? How’ve you been?”

He tells me that they have been out for a week and have the same amount left. Quite a short tour, but they are not as big as Emma yet. I have to say, it’s really nice to see him. I’m not sure if it’s just because I’ve got out of the right side of bed this morning or what — but I am in such a good mood today. I’m going to pack up the merch and go for a little chill on the bus, so that I’m fighting fit and ready to go this evening.

I say goodbye to Jay — “See you later, hey, come and do a signing at the stall tonight, you’ll sell more and we can hang out.” He nods and gives me the thumbs up.

On the bus, I head up to the back lounge to have a lie down and chill out for a bit. Robin’s in there already, watching a little Family Guy. I tell him that my ex is the lead singer in the support band tonight. He tries to look disinterested but I seem to detect a little jealousy, perhaps. Really? Wow, tonight should be interesting. We both go quiet and watch the TV. We’re lay down on the U-shaped sofa, one on each side. He has piled up all the cushions in the middle so I shuffle up a little and I lay my head next to his. 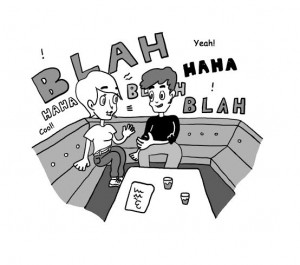 I know I’ve come here to relax but all of a sudden, I feel my heart quickening and I feel a bit excited. Jesus, I need to calm down. I’m only sat here watching bloody Family Guy with a colleague. Down girl!

I seem to spend the rest of the day with the horn. In between flirting and catching up with Jay, my mind keeps wandering over to Robin. I go for a beer with Jay before doors and he spends most of the night hanging around at the merch stall. Girls keep coming over to chat to him and I can see that he is still a hit with the ladies. He doesn’t seem all that interested in them though, so I take the opportunity to ask him if he’s seeing anyone. Apparently, it’s complicated. I reckon that means that someone somewhere thinks she is seeing him, whether or not he feels the same. In my experience, that’s usually what that means. I don’t see much of the rest of his band; they’re all out in the crowd, chatting to the fans.

After the show, as I’m packing up, I can see that Robin keeps looking over to my stall where Jay is keeping me company, and attempting to be helpful. I don’t think anything will happen with Jay. I think he’s just happy to see me, really, but I’m enjoying his attention all the same.

Jay helps me get my boxes over to the ramp, and we hang out the back drinking and smoking whilst the rest of the boys finish packing the truck. I’m fairly certain that Robin keeps looking over, and I’m actually feeling a little chuffed with myself, so I laugh a little louder at whatever it is Jay is going on about. A few of his band come over with some local girls and we have a bit of a drinking session out the back.

We’re not leaving until quite late tonight, so when the truck’s packed, everyone showers, and one by one the party in the car park grows until finally we’re all back on it. Even the guys who trashed the hotel room are back drinking. I don’t know how they do it! I would surely need to rest after a night like that. Robin and Dave come over and join us. Dave knows a few girls and brings them over. They seem really nice and all, but I can’t help feeling a little jealous that they get to dress up, and they look a lot hotter than I do in my jeans and vest top. After all, I can hardly wear heels and a cleavage defying mini-dress to work. I feel a little outdone and ask Jay if he fancies sitting down on the wall, which is slightly away from the rest of the group. 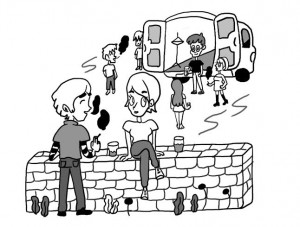 I hope Robin’s eyes are following me but I have no idea, as I daren’t look back. That would defeat the whole object! I’m really enjoying Jay’s company but he is going tonight. We compare diaries and it turns out that he is going to be in Oslo the day after us, and in just a few days time. Then they’re in Stockholm the day before us. Close, but no cigar. Damn, that settles it — Robin it is then. Still, no harm in winding him up a little more, eh? My mind keeps drifting from what Jay is jabbering away about, so I tune back in and decide to enjoy the rest of the short time I have with him.

Vic comes over to pinch a cigarette from me and to let me know that we are leaving in about five minutes. I check my watch and it’s about quarter to three. I hug Jay goodbye and he holds me a little longer than he probably should. I tell him that we should try and make an effort to meet up when we both get back off tour, and he agrees. We hug again. I go to kiss him on the cheek and he moves a little and I catch his lips. It all gets a little awkward, and I can feel myself start to blush something fierce, so I just pull away and head back to the bus with a cheerful ‘see you soon’ to Jay.

I get on the bus to find everyone mixing drinks, and Richard is pouring out about half a dozen shots of tequila. Most of the remaining band and Vic head upstairs for some peace and quiet, and there are there are just a handful of us left. Basically, anyone who took it easy yesterday is up for it tonight. And of course, the usual hardcore suspects haven’t been finished with work long, so they’re  playing catch up.

Around half past five, Robin and I are the last up, and with the heady haze, it’s getting a bit, well, messy. We’re kind of draped on each other and talking animatedly as one does when you’ve been drinking for hours on end. Quite often the first night on a bus can be a bit dry, so I usually get in some gin, wine, or ingredients for margaritas. There’s some of my stash left, so we polish it off.

We’re cosy-ing up to one another when it happens. For some reason – temporary insanity, hormones, perhaps I drank soap instead of tequila — it comes to the point where I mumble the words, “You know I like you though, don’t you?”

Why? Why would I do that? Don’t dip your nib in the company ink and all that! Well, technically he is ‘only’ crew like me and after the German fiasco with the Vampire vodka, it’s quite possible it wouldn’t be the first time, but I digress.

Before I realise what’s really happening, my inhibitions run off to bed, and we’re kissing. 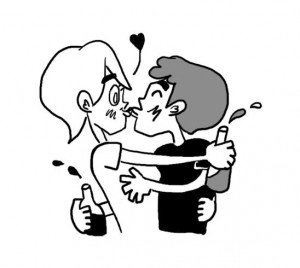 Features
are we a bus