Amelia and I are three people from the front of the now epic queue to get into the Roadhouse. The wind is coming round the corner with such force that we can no longer use other people’s Parkas for shelter.

There’s a hold up at the front…the stoney-faced woman with the clipboard is very bluntly asking a well dressed lady how exactly she knows Aziz, to which she cooly responds – ‘Well, I was married to Tony Wilson’. Inside, Ian Brown’s chatting in the corner, while Mike Joyce sorts some auction materials, Bonehead dishes out pizza, and Steve Hogarth (wearing quite possibly the most wonderful pair of trousers I have ever seen) confuses passers by telling them he’s standing in a cupboard. While all this is happening, vocal/guitar duo Peru and Kasey rehearse, Welsh harpist Nero tunes up, and other DJ’s and Indian Classical percussionists sound check ready for the show.

This motley crew of new talent, big names, philanthropy and genre bending seems to be everything Aziz Ibrahim is about, a celebration stamped 100% with his personality. Well, it is his birthday after all… 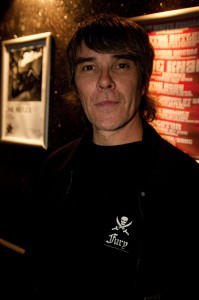 He said; “I’ve been away from Manchester for a little while, and when I came back I didn’t just want to go back into playing professionally. I started doing community work, teaching schemes and workshops in prisons, I started mentoring a couple of young and up-and-coming artists (at this point Steve Hogarth introduces himself). I owe a lot to my friends…you don’t get anywhere without the help of other people. It’s like me saying to Peru and Kasey come and play. If I don’t say that and give them an opportunity then how do you advance? In the same way, this thing tonight is about saying thank you to friends, family, fans, musicians’. 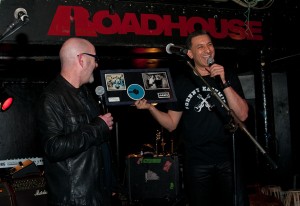 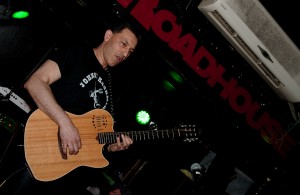 It’s this genuine desire to use music for all the good it can bring that makes it obvious as to why Aziz is thought of so fondly by artist at various stages in their careers. Manchester has changed throughout his time as an artist, music has changed. There’s a mythology around his generation and how they shook up the industry. I asked him how the city differs now, if people can jump from band to band, style to style the way he did. 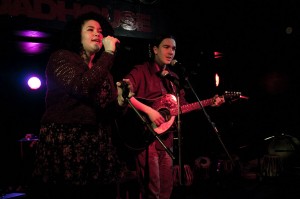 He eloquently responds; ‘The city grows constantly… Music has become more of a study, there’s more ‘cologies’. Back then there was nothing, now it’s more an education. So when we used to jam we weren’t people for Royal Northern College of Music or Salford Uni. We were just people with jobs, or no jobs, and instruments getting together in some seedy place that were illegal. It was exciting and dangerous at the same time. There’s still jams around, but the resources have changed with the internet. It’s faster, but it doesn’t make up for originality.

“But I do love [the internet], anything that helps artists get what they do to the public is a good thing.” 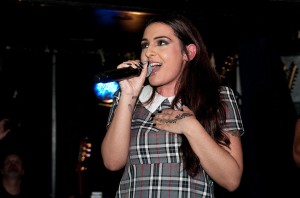 For Aziz there are no negatives to how music develops, just as long as it does. He’s all about finding the individual voice and breaking type. As an Asian man working in largely either White or Black genres he has always stood out.

“When I grew up I saw opportunities to play which were pushing the confines of culture… And that’s what I like, for people to think outside the box and not be limited because of the stereotypes people put on you…I wanted to find my voice…I don’t see those limitations, I see what I can do, how far I can go, what potential can I fulfil.”

It’s soundbites like this that make Aziz the perfect mentor for the next generation of musicians. Wanting to sound like the best individual you you can be is the perfect attitude in a market saturated with carbon copies. 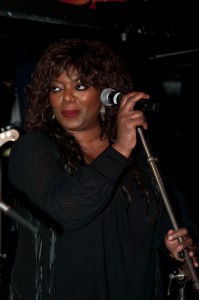 Listening to his own music, for me there are two key things you can hear. The first is his positivity, every track has an underlying vibe of feeling good, much like chatting to the man himself. Secondly is how obscenely talented a musician he is. His guitar playing is pure seductive blues, beautiful but hard. And his ability to arrange a track, with the layering of guitars and Indian percussion, turns his songs into gorgeous melting pots of the sounds
of the city. Those Asian Blues are aural indulgences that begged to be listened to, fine craftsmanship requires an audience.

And he definitely isn’t finished yet, with more collaborations and solo work to come, as well as being mentor a new generation of young artists. This is a guy whose talent and prowess should by rights have him chilling in an ivory tower in a tax haven somewhere. And yet here he is, organising a charity bash/new artist showcase for his own birthday. Legend. 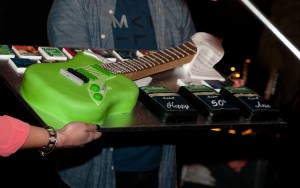 All photo credit to Mudkiss Photography.