Being described as ‘a full-throttle soul screamer in the spirit of Little Richard, Wilson Pickett and Solomon Burke’ is something that most musicians would inevitably fail to live up to; that is, unless you are Barrence Whitfield. 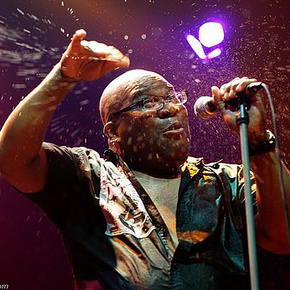 On a sweltering Saturday night in one of Soho’s premier live venues, Whitfield – alongside his band ‘The Savages’ – rolled back the years to perform a rock ‘n’ roll-soul masterclass of the highest calibre. Opening with screams of “Are you ready?” – which instantly transformed the room back to the 1960’s – Whitfield powered through a career spanning 20-song set with such passion and intensity that it would have been almost impossible for someone even half his age to replicate.

It was clear from the offset that many of the packed out Borderline crowd had come to dance and Whitfield was happy to provide them with a soulful blues and raucous rock ‘n’ roll soundtrack to shake a leg to. ‘Willie Mehan’, a track from the bands 2011 album ‘Savage Kings’, which told the tale of a boxer who fought the great American heavyweight Jack Dempsey (and was accompanied by Whitfield’s own Rocky Balboa style shadow boxing), energised the entire crowd into moving and partying along with the exuberant and lively vocalist. The crowd were animated further by ‘The Corner Man’ from 2013’s ‘Dig Thy Savage Soul’ which featured a driving guitar riff that sparked various members of the crowd into attempting some energetic rock ‘n’ roll dance moves and Whitfield was even kind enough to grace the stage with his own dazzling moves during crowd favourite ‘Bloody Mary’, from 1985’s ‘Dig Yourself’.

At several poignant moments throughout the evening, Whitfield showcased his soulful, bluesy side, which resulted in a torrent of heartfelt and touching emotion in stark contrast to his exhilarating rock ‘n’ roll alias. The Lee Moses penned ‘I’m Sad About It’, which Whitfield has previously performed on Later with Jools Holland, and ‘You Told A Lie’ allowed the crowd to catch their collective breath and bear witness to an outpouring of intense misery and loss through Whitfield’s wailing screams and expressively moving vocals. At one point of light relief during ‘You Told A Lie’, Whitfield looked as though he was attempting to win an Academy Award for best comedy performance as he collapsed to the floor in a playfully-comical sobbing, yowling heap and only the reassurance of his bandmates could raise him from the ground to finish the song.

Still, after 17 songs and visibly melting from the searing heat of the basement room, the band managed to return to the stage for three additional tracks across two encores and rounded off the evening’s events with the rousing, saxophone flaunting ‘Dig Yourself’. Whoever said rock ‘n’ roll was dead clearly didn’t tell Barrence Whitfield and The Savages, and as I was lucky enough to witness such musical prowess and masterful showmanship, thank goodness they didn’t as the band did everything they could during this set to ensure the genre they love lives on in 2014!