With festival season in full swing Gigslutz continues to bring you reports from the best of what summer 2013 has to offer. This time around, we sent our Scottish correspondent Jack Rowberry off to Spain to see what Bennicassim was all about…

First up for me on Thursday night was Queens of the Stone Age. I didn’t think I’d be massively into this lot. I have their records but if I’m honest I haven’t bothered listening all that much. In the run up to the show the general impression I got from most people I asked was they only know the hit which is ironically called ‘No one knows’. But we all knew to expect a full on rock show… Which is always good, right?

They bounced straight into again ironically named ‘Feel Good Hit for the Summer’ from the album ‘Rated R’. Straight away it’s massive, following that were the hits ‘No One Knows’ and ‘First They Giveth’.

Josh Holme is now one of my favourite front men, how a man with such a naff rock star hair cut can be so cool is beyond me. One of the coolest guys in the game tamed the rowdy crowd with ease. Excellent show!

As Friday came around the first one on the list for me was Dizzie Rascal. I’m generally not keen on this style of Hip Hop, I like mine with old beats and American flavour. However, Mr Rascal gets things shifting with ‘Base Line Junkie’, there is no getting away from the sheer size of this tune, it’s a perfect summer tune for a young benni crowd.

As the show goes on, it’s easy to see that not only is this guy a fantastic front man he is simply in love with what he does for a living. Even when he was warned for running over on his set he was grinning from ear to ear, saying “this is going to cost me so much money for the fine, but fuck it, lets do it anyway”

Rather than leave the stage as directed he went crowd surfing, video taking and instagraming. He didn’t want to leave and I don’t think anyone else wanted him to, apart from Liam Gallagher who was due on stage.

During his last song he stopped the song due to some girls falling over in the front row, Dizzie jumped down to help and didn’t leave until they were on their feet again. The true gentleman got a rapturous applause for that which could only be deserved. 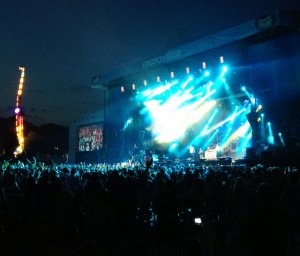 Prior to Beady Eye’s show, frontman Eye Liam Gallagher was reported in the news to have been on a bender in Ibiza before flying to Bennicasim. I could believe that by the nick of him.

Being a massive Oasis fan and also a Beady Eye fan there was no defending Liam on this performance. First song ‘Flick Of The Finger’ was straight away a let down. They just didn’t have the energy to follow Dizzie Rascal.

Liam sounded rough, tired and out of tune. It was cringe worthy at times. Some of the crowd started leaving, most stayed with interest. I suspect their was nothing else on at the time.

The big moment of the set hits us, ‘Rock And Roll Star’. Even when missing the vital component on stage right, the tune sets the crowd on fire. ‘What’s The Story Morning Glory’ follows. Liam sang the entire song in the wrong key. Most lost interest but the hardcore fans had no choice but to loose themselves in order to enjoy.

The band are great, right on the money it’s just, once again, the front man we all know and strangely love, making a meal of it.

Jonny Marr pulled things back however. The Smiths guitar player was right on the money. Loving every second of it, his fans sing every word at a similar volume a headline act could expect.

The obvious Smith covers got the crowd buzzing beyond belief. His legendary guitar talent is backed up by awesome vocals and a super tight band.

There is not a lot to say here, he nailed it, loved it, the crowd loved it and what a relief after Beady Eye’s performance. 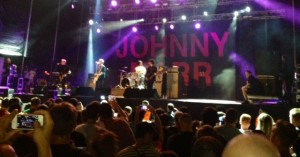 It’s up to Primal Scream to end the nights entertainment. It seems that Bobby Gillespie is wasted however! In fact, he seems like he’s not even on the same planet, yet he somehow manages the words. Comedy gold.

The Scottish flags are waving and everyone and yes I do mean everyone was dancing like they were high.

Primal Scream, as normal practice, infect the crowd with happy thoughts and a desire to dance with your arms out wide.

When the band ended the set, Bobby Gillespie had dedicated a song to Amy Winehouse and Liam Gallagher, he had turned a mental crowd into a sedate ‘happy’ feeling group of friends.

Epic night of music closed by one of the best live bands in the world.