When boys are asked “What would you like to be when you grow up?” many would most likely say something like ‘footballer’, ‘astronaut’ or ‘rock star’. Strangely enough, one of the world’s most naturally talented guitarists, Joe Perry, didn’t dream of being any of these things. In the beginning of Rocks we learn of Joe’s obsession with the natural essence of our world, and the sense of adventure it still holds for him today. And any book that begins with a foreword from none other than Johnny Depp is bound to be something special, but we’ll get to that later…

It’s rather comforting to read that Perry started off where many others did in the world of music; a youngster who was grabbed by the blues and couldn’t escape its grasp. Joe demanded a guitar, and to his dissatisfaction, he was given an acoustic. But a guitar is a guitar, and after hours of strumming away on his acoustic, an electric guitar came into Joe’s world. And the rest is history. Perhaps the most reassuring aspect of the Aerosmith man’s success is the means by which he got to where he is today: practice. Joe, like any other beginner, would sit in his room and practice for hours on end, and today he’s one of the greatest rock ‘n’ roll guitarists on the face of the planet. If this doesn’t convince people to keep going when learning an instrument, I don’t know what will.

Rocks is a remarkable insight into life within Aerosmith, beginning with their early origins in the early 70s, where the Vietnam War and the death of Jimi Hendrix formed the backdrop to the fledgling band. The story begins in Boston, and from the start we learn that conflict would become an inescapable feature of the band’s life, with clashes of personality, lifestyle and methods. The book doesn’t shy away from the darker side of rock and roll, and reveals that some of the biggest problems within Aerosmith were caused by non-band members. Their relationship with “control-addict” manager Tim Collins is particularly damaging. After pulling Perry out of a dark period in his life, Colins quickly began to control every aspect of the five members’ lives, whether it be buying a sound board for Joe Perry’s home, or  giving out advice on who they should marry: “You’re all too dependent on your wives. You’re involved in unhealthy codependent relationships… I can’t manage a band that’s addicted to anything.” 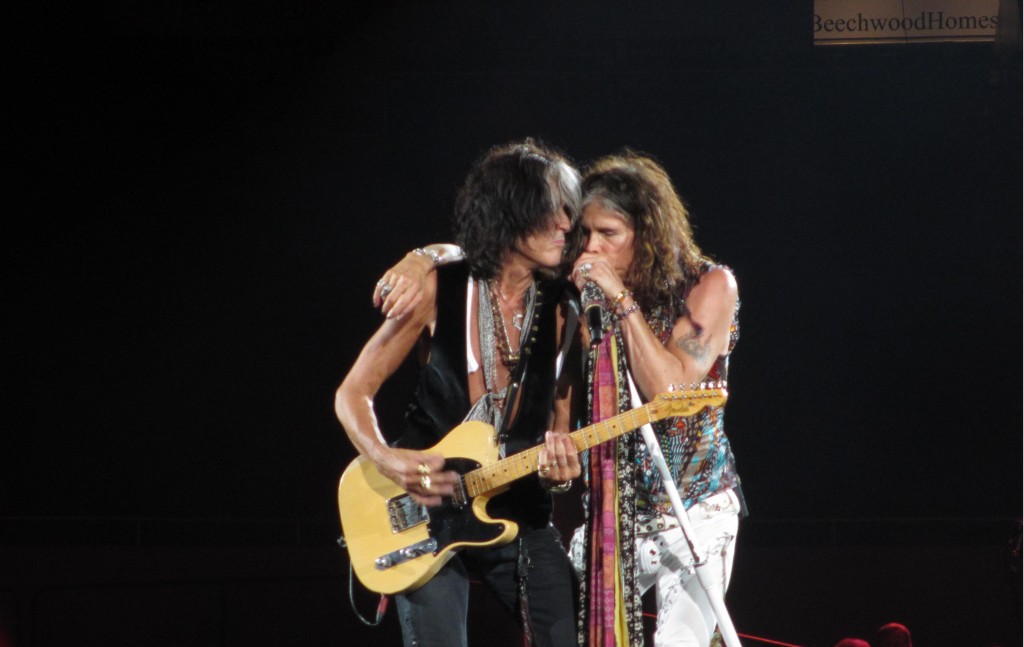 In the early days of Aerosmith, it’s apparent that the relationship between Joe and Steven (Tyler) is the most pivotal factor in the band’s success (or in some periods, lack of). Rocks grants the reader an insight into the real relationship between the two like never before.  At times, Perry’s criticism of his band mate is harsh, though the honesty is refreshing: “He has a side that can be evil and cruel… It’s easy for Steven to manipulate people. I, of all people, should have known that”. On discovering that Tyler is secretly auditioning for Led Zeppelin a few years ago, Perry gives no quarter: “I learned over the weekend he had flown to England, where he was auditioning for Led Zeppelin. What the fuck… According to Jimmy Page, it was shambolic.”

Elsewhere, Perry reveals how hit albums such as Toys in the Attic, Rocks, Get a Grip and Just Push Play were made, as well as classic tracks like the unforgettable ‘Walk This Way’, ‘Sweet Emotion’, ‘Dream On’ and so forth. We’re also introduced to the people Joe keeps close to his heart, namely his wife Billie and their children. We also get to meet some of his famous friends, including Jimmy Page, Jeff Beck, John Belushi, Alice Cooper and Johnny Depp, who refers to Joe as “a hero who I’ve been given the honour to call both friend and brother”.

By the end of the book I felt uplifted and enlightened by Joe Perry’s journey, a tale rue rock and roll, of hardship, but undoubtedly of love. Love for music, love for brothers, and love for being in love. After a period of absence from being an Aerosmith fan, this book has refuelled my interest in them, and more so, those funky riffs and screaming lyrics, which are arguably some of the most iconic in rock and roll. This is undoubtedly one of the best autobiographies I’ve read, and I recommend Rocks for any fans of Aerosmith, music, or anyone looking for a good read.