UPDATE:
Prince’s manager Kiran Sharma has confirmed via Twitter that he will be performing an ‘open press soundcheck’ at the Electric Ballroom following the press conference with Lianne La Havas, where acoustic versions of PRETZELBODYLOGIC and FUNKNROLL were performed. 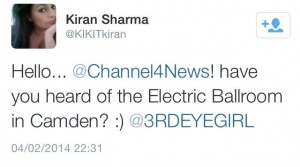 Speculation is growing on the internet as social media erupts with rumours of Prince performing a secret gig in Camden tonight.

The gig is rumoured to kick off at 3am (Wednesday 5th Feb) and according to multiple online sources will take place at Camden’s Electric Ballroom. Prince is assumed to have just finished a closed press conference with Channel 4 and Seatwave at Lianne La Havas’ apartment, in which he was supposed to have confirmed details of his UK tour.

Labour MP Kerry McCarthy has tweeted a picture of the queue forming outside the supposed venue in Camden. 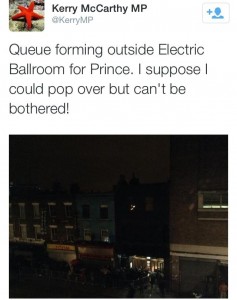 According to sources and pictures circulating online, the gig will be free streamed live! Watch this space!

Miley Cyrus Covers ‘Why’d You Only Call Me When You’re High?’ LISTEN NOW