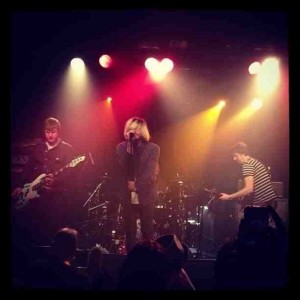 Fred Perry celebrated 60 years as an icon of fashion with a special gig at The Garage in London to mark the anniversary. A line up Terry Hall, Don Letts, Norman Jay and the mighty Charlatans got Gigslutz juices nice flowing.

There was only one problem with this gig – getting in. The gig was a corporate affair and hence access limited. Some tickets were available by competition, but I’ve never had any luck so that was a non starter. Fret not, Gigslutz supporter and Charlatans drummer Jon Brookes was on hand to throw a couple of extra names on the packed guest list. Cheers Jon.

This was a bit of a special gig. Usually at some of these corporate shindigs the band are less interested and go through the motions in exchange for a nice little earner. I feared that could be the case tonight and I was fully prepared for the anti climax. I shouldn’t have worried.

Although they came on stage around an hour and a half later than expected they rattled through a near perfect career spanning greatest hits set. Starting with ‘Then’ they knocked out all the classics including ‘Weirdo’, ‘Thinking Things Over’ and female defining ‘Impossible’ before the standard set ending ‘Sproston Green’.

This was the last Charlatans gig of the year, and maybe for a little while so there seemed to be a bit of an end of school party vibe about it. This coupled with it being in such a small venue (under 1000 crammed in) it added to an electric and sweaty environment. Tim left the stage during Sproston Green and was straight into a cab to an XFM show. He should’ve stopped about to listen to the tunes being knocked out by Norman Jay and Don Letts. A rare treat for a music head such as himself.

It’s been a busy year for the Tim Burgess. The infamous ‘cocainus’ book, inventing cereals, his Tim Peaks diner and of course the triumphant Tellin Stories tour.  Next up will see his latest solo album and tour to follow. His first single is sounding good already and we will be at the Union Chapel later in the month to see how the solo gig goes.

As much as I like the solo ventures, hopefully we won’t have to wait too long before the Charlatans are back as one and writing more new material. I’ll take this opportunity to wish Jon a double quick recovery from his latest treatment and hope to see him back behind the skins in no time. 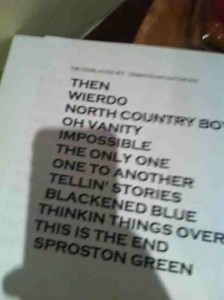