For the latest project in The Jameson Works, which celebrates the stories behind modern craft, Jameson have partnered with creative duo Tim & Barry to explore the face of underground British music culture and celebrate those that are defining this sound. The Jameson Works admires people who care about their craft in the same way that Jameson cares about making great whiskey and celebrating those who’re passionate about telling the stories and spreading the knowledge of how great work is made. This is where Tim & Barry come in. 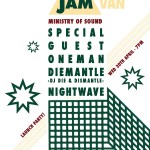 Long-time music documenters/curators, they’ve worked with Dizzee Rascal, Four Tet, Omar Souleyman and everyone in between. All-encompassing visual creatives, they’re as renowned for their music videos as they are for their pioneering live music event, Just Jam. For The Jameson Works, the East London pair have created The Just Jam Van – a mobile studio space quite unlike any other. What started life as a van in a Doncaster car park has been transformed into a bespoke studio, using state-of-the-art technology integrated with recycled Jameson whiskey crates (plus a bar for those post-Just Jam Jameson sessions!).

Taking inspiration from the early 90s, when Britain’s rave scene was in its infancy and devotees would travel the country every weekend in search of the new hotspot, the East London pair wanted to take to the road. They’ve created a studio ready to tour the UK and host some of the best music producers and DJs for exclusive Beat This/Just Jam sessions. All showcasing the craft of production that goes in to tracks and sets that we love.

The tour is set to kick off in London and will travel to Bristol, Manchester, Birmingham and Glasgow, but before it does, we’re giving away FIVE pairs of tickets to the official ‘Just Jam Van’ launch party which is being held on Wednesday 20th April at London’s Ministry Of Sound. There will be sets from Oneman, Diemantle (DJ Die & Dismantle) and Nightwave plus some amazing special guests, so it’s so to be a great night. All you have to do is answer the simple question below to be in with a chance to win a pair of tickets…

The competition closes at 5pm on Monday 18th April 2016 and winners will be informed via email. You must be 18 years of age or over to enter and will need to provide a copy of photographic ID at the venue to gain entry. Travel and accommodation are NOT included. Your friends at Jameson remind you to drink responsibly; drinkaware.co.uk for the facts.