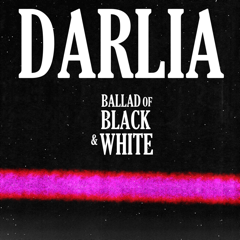 It’s been a long two years for Nathan Day and Darlia. After a string of heart-bursting singles and bruised rock brilliance they released ‘mini-album’ ‘Petals’, a swirling melee of ’90s grunge, rampant melodicism and high-voltage noise… but although it felt like a summation of kinds, the glorious crown that capped off a spell of acclaimed releases and live-wire performances it was far from the end game. ‘Petals’ was a prologue.

‘Ballad Of Black & White’ is Darlia’s comeback after too long away, and it’s a mighty return to form (and then some) with all the ingredients for a potent summer banger. It’s seriously big, with vibrant hooks and a chorus destined for cider-soaked festival beltalongs.

Speaking about the new single, Day explains; “I remember trying to demo this tune myself when the house was empty and it was too much for me to tackle at the time. Fortunately I then got to work with the producer Dan Lancaster which was when I realised he might as well be a fucking magician because he’s amazing. We recorded the tune in two sessions. The first one we kinda mapped it out and it was so unfinished I don’t think I even heard it back all the way through. After the first session I think he secretly sprinkled some magic dust on it or some kind of chilli sauce cos he sent back a rough version and we were all like “FUCK – that’s unexpectedly spicy” and knew it had to be finished. “

They headline a sold-out London Camden Assembly on March 29th

This Feeling Track of the Day : Easy Life ‘Boy’

FESTIVAL GUIDE: Are You Listening? Festival