Edwyn Collins proves he's still got it with an intimate, moving and entertaining set at Meltdown Festival.
Rating:

Another wonderful evening lies ahead at the Meltdown Festival, thanks to James Lavelle, and tonight I have the pleasure of seeing Scottish troubadour – and personal hero of mine – Edwyn Collins. Opening for Collins, at half past seven on the dot (the most prompt gig I’ve ever been to!) are Colorama. Fronted by singer, songwriter, multi-instrumentalist and guitarist and friend to Edwyn – Carwyn Ellis – Colorama get the night off to buoyant start with their funk-infused offerings. I will most certainly be taking a listen to their new album ‘Temari’ (and not just because the title has a rather nice ring to it…)

As Carwyn returns to the stage, Edwyn takes his place seated on a Peavey amp. Opening with Orange Juice classic ‘Falling And Laughing’, Collins’s distinctive deep, new romantics-esque vocals resound across the room and those characteristic syncopated riffs blast from the stage. What a perfect start to the set this is – the venue is immediately alive with not only the impeccable musicality of all band members, but with the unrelenting charisma and humour of the band’s front man.

As the set continues, so does Collins’s magnetism and contagious chuckle, proving that he is so much more than just a singer songwriter, he is a natural showman… Despite the effort it must take him to talk in front of a crowd, and the careful manner of speech he has adopted, each song is interspersed with his witty, self-deprecating chat and infectious smile that instantly brightens the room even more effectively than the multiple coloured lights illuminating the stage. 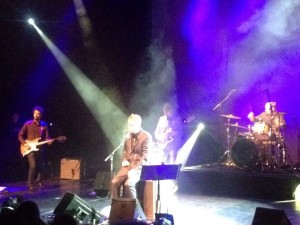 Treating us to a combination of old classics as well as newer tracks from his most recent album – Understated – there is not a moment throughout the set that I am not wholeheartedly enjoying it. As well as blasting out funky numbers filled with the scintillating sax of Sean Read and raucous riffs of David Page, Collins and co. also succeed in delivering touching ballads that have me on the edge of my seat. One such song is ‘Make Me Feel Again’ – perhaps not initially intended this way when it was written for Gorgeous George back in 1994, but which now seems to have an added resonance. As he sings “Doubled up in agony, won’t you help me unfold?… All I need’s your love to make me feel again” one can’t help but find it somewhat fitting now, given Collins’s experience of suffering a double brain hemorrhage in 2005 and having ‘lost feeling’ in one side of his body, but having had the support of loved ones to help with his fantastic recovery.

However, despite the undeniably stirring moments of the set, it is impossible not to keep smiling throughout the evening thanks to Edwyn’s unwavering humour and the vigorous energy and flawless delivery of the band as a whole. As they “go back to the Orange Juice days” – with classics ‘Rip It Up’ and ‘Blue Boy’ –  Collins’s vocals remain clear as he exudes his rich vibrato, casting an admiring look at Page who is indeed ‘ripping it up’ on guitar: “great guitar, isn’t it?!”  This enthused vivacity continues through to Collins’s most famous song, ‘Girl Like You’, as he further proves that he is still able to keep up with his sweeping melodies and deliver his unique, smooth baritone.

As just Edwyn and Carwyn return to the stage for an acoustic encore, they deliver another particularly poignant track. Although ‘Home Again’ was written just before his accident, the whole song seems like a reflection on Collins’s horrific experience and monumental recovery: “I’m home again… I started searching for my soul again and there was nothing I could find”. Close to tears, I’m almost reaching for the tissues as Edwyn introduces the next song by stating “Grace – my wife – she looks after me from time to time. She’s my angel”.  Luckily for my eyes, however, he is soon cut off by his wife shouting from the row behind me “Just get on with it!”; a refreshing insight into the pair’s relationship, it’s nice to catch a glimpse of the banter they share that I remember so well from seeing at Collins’s intimate set at Maida Vale last year. The mood is lifted once more at the end of ‘One Track Mind’ as Collins reveals “It’s incredibly dark, isn’t it? Sorry, before my stroke I was a bit… mad.”

Another wonderful set filled with the perfect balance of energy-filled musical skill and sheer entertainment with genuinely moving, heart-rending moments. Proving that he’s still got so much to offer, and has even come on since last summer’s performance, Edwyn Collins is a joy to behold – an inspiration, a fantastic songwriter and just the nicest of guys. I can’t wait to see what he has in store for us next.