"...by far Chip's most honest and reflective offering yet."
Rating:

Having been one of the catalysts for the flurry of recent war dubs in the grime scene, North London MC Chip has never been one to shy away from the spotlight. Since he first made his underground breakthrough as Chipmunk 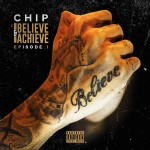 back in 2006 when he was just sixteen years old, Chip has enjoyed huge chart success, performed at some of the biggest festivals around and even signed with US rapper T.I.’s record label Grand Hustle.

But having done all that and released numerous bodies of work, Believe & Achieve Episode 1 is by far Chip’s most honest and reflective offering yet. The six track EP is, in essence, a retrospective of the last ten years and there are a number of moments during it that allude to that.

The fact that the opening track is titled ‘Where Are You?’, a knod to ‘Who Are You?’, the track which propelled Chip to his early success, speaks volumes. Even the opening line, “It’s been a journey but I’m coping”, signals the story we’re about to be told and the rest of the EP follows suit.

With the features that are included, you’d be forgiven for thinking that this release was going to mark Chip’s return to the 140bpm grime sound that he started on, especially as grime icons D Double E, Kano, Jammer, Wretch 32 and Stormzy make up the hugely strong supporting list. Whilst fast tempo 8-bar-rallies and reload bars this EP isn’t, the diverse nature of each track means that it doesn’t matter. The evolution of Chip from MC to artist is clear to see on Believe & Achieve Episode 1 and that is what makes the EP a great listen.

The exciting funk-inspired beat of ‘Feeling Myself’ has a very radio-friendly sound, showing how much Chip has learnt during his journey through the industry. Adding two of the best wordsmith’s that the UK has to offer in Wretch 32 and Kano ensures that this track is a definite highlight, but that is not taking away from the rest of the EP.

‘Holdin’ That’, which features a vocal hook from the ever-popular Maverick Sabre, is another strong track and sees Chip reveal more about his inner thoughts and the struggles he’s been through in life, “Reflecting on my reflection / not vain, facing depression / I’m still stressing but life’s a blessing / my teacher never taught me that life’s a lesson”.

The final track of the EP ‘I’m Fine’ drifts towards a more grimey sound, whilst ‘School Of Grime’ is a direct reference to the genre that gave Chip the platform to launch his career, “Back in the day I was Heat FM’s prophet / back when five pound subs hurt my pocket / grime scene saviour, rudolph raver / ten years later you know I still got it”.

With Believe & Achieve Episode 1 covering tales of the past, the next episode, which is set for a release later this year, will hopefully be a look into the future and that future looks to be a very bright one for Chip. Whilst he hasn’t always enjoyed the full support of the UK scene, there is no denying the talent that he has and this EP will go a long way to proving any doubters wrong. Having released Believe & Achieve Episode 1 independantly on his CMAR label, Chip has given himself the freedom to create whatever he likes; let’s hope he uses that freedom wisely.

ALBUM: Winter Villains ‘Once There Were Sparks, Now There Are Ashes’

Discovery of the Week: Cavalry