Graham Day (ex-Prisoners front man) explains the process and circumstances which lead him to record his debut solo album The Master Of None, which is being released via Acid Jazz off shot label Countdown Records on 25th March 2022: 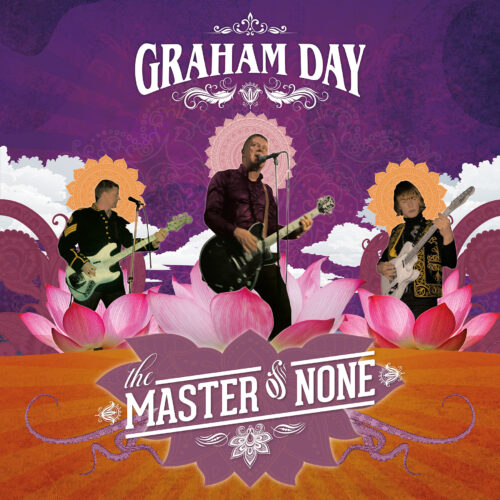 ‘In March 2020, I was booked into the studio to record the third Graham Day and the Gaolers album. Those plans were scuppered just the week before the session when we went into the first lockdown.

It was looking increasingly likely the studio would be shut long-term, and our drummer was stuck in the USA (where he lives) for the foreseeable future.

‘I was sitting on an album worth of new songs and it was frustrating beyond belief, particularly as my mantra has always been to write and record quickly, capturing a performance, a particular moment in time, then moving onto the next thing. If I labour over a song for too long I start to pick holes in it; I’ll probably end up either re-writing it or consigning it to the bin.

‘I was already starting to do this when Eddie Piller rang me up out of the blue. He said he wanted me to record an album for the Countdown label (which we’d recorded the final Prisoners album for back in 1986) he’d recently decided to re-launch.

‘All I had was the demos for the Gaolers album which I’d recorded at home on Logic Pro X. I’ve always been wary of computer recording; I prefer analogue tape, a band and an energetic performance. I thought Logic was great for demos, but it went against everything that I believed in to even consider doing something release-worthy on my own on a computer.

‘By a stroke of fate, during lockdown a mate started hosting themed ‘covers’ nights, where people videoed themselves on their phone playing an acoustic guitar and singing. I normally hate that kind of thing (I’m not into covers or acoustic guitars), but there was nothing else to do during lockdown so I thought I’d have a go at using Logic to record a song layering all the instruments and putting it to a silly video using IMovie.

‘It actually came out surprisingly well, and over the course of several of these theme nights I became better at using Logic, even enjoying the self-indulgence and ease with which you are able to create something half decent. So, with a lot of patience, frustration and above all help from YouTube tutorials I began to realise just how much you could do with it.

‘So I decided I’d have a go at recording the Gaolers album for Countdown, on my own at home on the MacBook, although by the time I started it I’d already scrapped a couple of songs and written a few new ones.

‘I started with a Logic drummer, playing roughly the beat I wanted at the right tempo. The first thing I recorded was the rhythm guitar parts, as it’s the instrument I’m most comfortable with. I had to ask the neighbours when they were going out for a walk, so I could whack the Vox AC30 up, stick my only mic on it (a Rode NT1000), and quickly put the guitars down before they came home. Mind you the whole street would have heard those sessions. The main guitars I used were a Danelectro 59, Fender Telecaster and a Gretsch Panther. I prefer guitars with single coil pickups through a valve amp driven to breakup point rather than the more powerful, but sometimes muddy and indistinct humbuckers. I’ve always been happier with a weedier sounding guitar that you have to have a bit of a battle with, I think it brings out a more aggressive playing style which I prefer to a ‘creamy’ rounded sound.

‘I have a 1971 Fender Jazz bass, and I recorded that straight into Logic rather than prolonging everyone’s ear pain by recording it through an amp.

‘I layered the vocal parts, sometimes double-tracking the lead vocal to compensate for the cheaper microphone sound, something I rarely do in a studio with better mics. I put on any extra guitar parts and solos mainly directly into Logic, utilising just a few from the hundreds of different amp and cab combinations, and I used a midi keyboard with the Logic Hammond B3 sample. I played real congas and percussion and on one track used a Danelectro electric sitar. I do have a proper sitar, but I don’t like sitting on the floor and it’s an awkward bugger to tune up, plus the electric one has a unique sound, like a cross between a guitar and a sitar and it’s much easier to play!

‘The biggest hurdle I had was the drums. I have a very basic Roland electronic kit, but the Logic drum samples are too clean and modern for my taste. There is a lot you can do with them, with room sounds, different compressions, and eq, I even tried sticking the drum sounds through an amp simulator to dirty them up, and although I got a bass drum and snare sound I thought was bearable, the toms were pretty disgusting. So I decided the only way to make an album which I would find acceptable was to record a proper drum kit. The only opportunity I had do this was to take the MacBook down to my mate’s printers, where we rehearse sometimes and he has a 60s premier drumkit there. I stuck the mic in front of the kit and attempted to play along with the songs from the Macbook.

‘The first issue was that I’m a loud drummer anyway, but this was in a large loud room, and I had to put the headphone volume on max just to hear the track I was playing along with. The second issue was that the logic drum track (which I’d used as a base to record everything else on to) was perfectly in time. I have always believed that music tempo should ebb and flow slightly, otherwise it feels unnatural. When you’re playing a chorus or a solo it feels natural to speed up slightly as your adrenaline kicks in. So as I was playing drums along with the track I kept slightly pushing the beat and I had to really reign myself back in. That wouldn’t have been so much of an issue if I’d recorded the drums first, but I couldn’t do that as there would’ve been nothing to play along to. A bit of a catch 22, but after a very frustrating weekend I managed to put the drums down, but I was deaf for a week afterwards.

‘Normally in a studio under the constraints of time and money I would be looking for a (mostly) live band performance; one or two takes capturing the rawness of a band slightly unfamiliar with the songs and therefore underplayed rather than overplayed and over rehearsed. Back in the early days I made a couple of albums with Producers who insisted on take after take, striving for perfection but just ending up with something lifeless and mechanical.

‘Making your own album at home without pressure or constructive feedback from other humans has a different set of challenges, namely knowing when to stop. It was tempting to overcompensate for the lack of spontaneity by filling the tracks with extra guitar parts, organ or backing vocals, and this album does have a few more of those than I would normally have the time or inclination for. Sometimes knowing when not to play is more important than what you do play, but that’s so much easier in a band environment with the confidence and respect you have for each other. But this whole project was a completely different approach to the other 17 albums I’ve recorded over the last 40 years, and in that way it’s unique.

‘Overall my own personal battles with technology, the self-doubt, piecing songs together like a jigsaw puzzle whilst trying to make it sound and feel like a real band ended up with something that’s certainly passionate, a bit scrappy in places, a bit over the top in others, but ultimately something I’m really pleased with and rather proud of.’

The Master Of None can be ordered via the following link

This Feeling Track of the Day: Malady ‘Round The Bend’