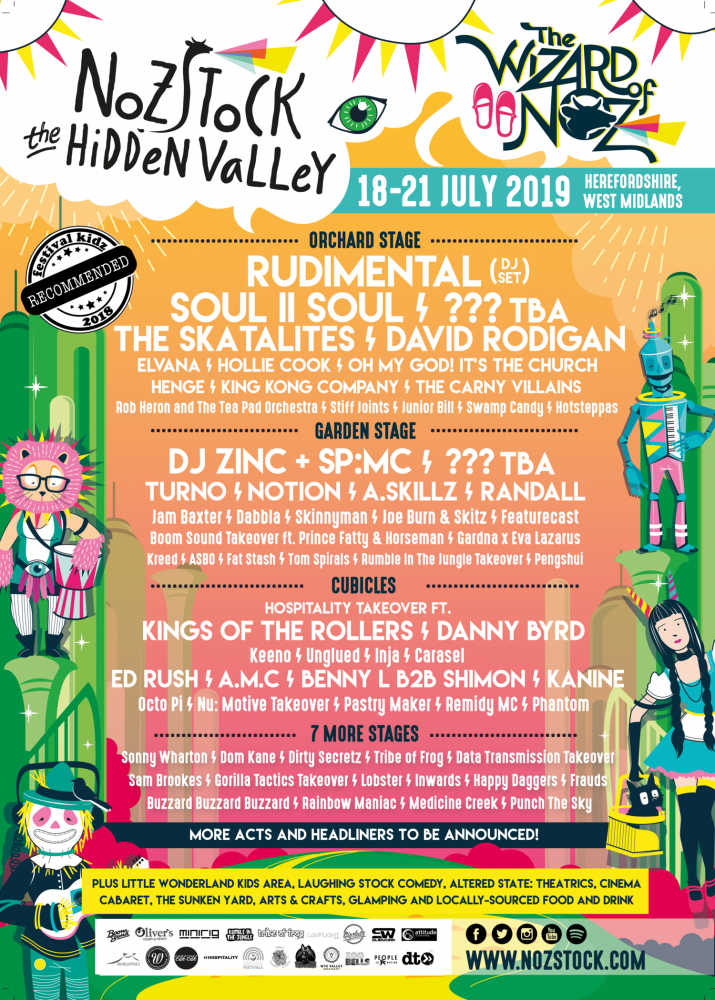 A Brief History: Celebrating its 21st birthday this year, the festival prides itself on its welcoming and intimate feel. The Nosworthy family made up of father and daughter duo Noz and Ella create something for everyone in a unique festival environment that can only be described as a festival that feels similar to wondering into a private party. Nozstock has won an impressive amount of awards including ‘A Greener Festival Award’ in 2017 and being recommended by ‘Festival Kidz’ in 2018. It started 21 years ago with a group of 50 friends and now boasts 5,000 attendees, yet manages to retain its well-crafted beginnings.

How To Get There: Buses run from both Bristol and London, cycling is encouraged and they even provide free cycle parking! You can catch the train to Hereford or Worcester or drive.

Gigslutz Top Tip: Try something new whilst you are here, be that wondering around the enchanting stages including a stage hidden behind a mirror maze, trying your hand at a new craft at the ‘Captivating Crafts’ area or recover from the night before at the ‘Wrong Directions Cinema’ showcasing a mixture of cinema classics and thought-provoking documentaries.

What We Said Last Year: ‘Nozstock embraced its distinctly eclectic heritage, hosting its best lineup to date…with a keen attention to detail and endless creative flourishes unlike any other festival, Nozstock packed a vast range of enchanting, crazy, curious, edifying and creative magic in each and every corner, focused around the 20th anniversary theme: Nozstalgia.’ Read the full review

Did You Know? Nozstock was nominated for more awards than any other festival in 2016!

How To Get Tickets: Online tickets can be bought from the site

This Feeling Track of the Day: Luna The Professor ‘Dreamers’

LISTEN: The Snuts share new single ‘All Your Friends’