The concept of Pixels – that aliens are sending 80’s arcade games to attack earth – is a pretty solid and interesting idea. Unfortunately, the film itself is neither solid nor interesting.

We begin in the 1980s (cue nostalgia) with a young Brenner (Anthony Ippolito) and young Cooper (Jared Riley) taking on Eddie (Andrew Bambridge) aka ‘The Fireblaster’ at the first annual arcade game world championships.

As we jump forward to present day, Brenner (Adam Sandler) is stuck in a dead end job setting up home entertainment media in people’s homes and Cooper (Kevin James) is somehow the President of the United States (despite, it seems, having an inability to read).

And so the absurdities begin. From Michelle Monaghan’s character, Violet, falling for the misogynist, unfunny, unattractive Brenner to Eddie’s fantasy three-way with Martha Stewart and Serena Williams; the plot moves from one ridiculous notion to another.

It’s disappointing to see that Chris Columbus is behind this film considering the many great films in his repertoire, including (but definitely not limited to) Home Alone, Mrs Doubtfire and The Help. All of these films have great character development, emotional investment in the story and great humour – all of which are missing from Pixels.

Taking the female characters in isolation; Violet (Monaghan) is set up as a ‘strong independent woman’ working for the President but her character is flat and under developed; she barely gets involved in any of the action and simply serves as a love interest for Brenner.

Brenner makes the highly misogynist assumption that Violet’s husband must have left her because she was once attractive in high school, but since then has let herself go and has a pot belly (rather than because her husband is a cheating bastard who fell for a 19 year old). Brenner is visibly and audibly taken aback when he first meets Violet and she is, in fact, slim and attractive!

Despite this initial encounter and further attempt to ‘take advantage’ of her emotional state, Violet still falls for Brenner! Why?!

The other women in the film come in the form of an out-dated British stereotyped Prime Minister, whose portrayal is borderline offensive and not funny; Serena Williams and Martha Stewart as themselves, there purely to fulfil the sexual fantasy of Eddie; and finally the alien embodiment of Lady Lisa, a computer generated woman with whom Ludlow (Josh Gad) is obsessed.

On the plus side, Pixels looks great. The graphics and the visual effects are superbly done; the arcade characters really jump off the screen and look stunning. Even the 3D, which I’m usually very much against, was put to good use in the film and made it visually interesting.

It is a shame that the rest of the film does not reach the bar set by the visuals. The plot becomes absurd and ultimately pointless, as we do not feel emotionally invested or connected to these largely 1D characters. 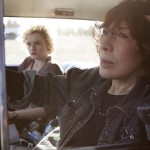