Forget about the pastel suits and rolled up sleeves. Forget about riding the front of a yacht, playing Indiana Jones and being strapped to windmills. Forget, if you can, about every single monumental video that, when MTV began and the M stood for Music, transformed Duran Duran from back street Birmingham beginners to “The Fab Five”, and listen to an unlikely blend of AC/DC-esque guitar, Kraftwerkian keys, disco-bass and drama school poetry which created pop masterpieces.

Before fame had pasted their faces on every schoolgirl’s bedroom wall, and their sound had been altered to accommodate a worldwide audience, Duran Duran recorded this; their debut album, and their best to date. Recorded in 1980, its sound soaked up everything that surrounded the crossover of the decades – pop, rock, electro, disco, glam rock – to create a new genre, it’s name referenced in a line from their debut single, and one which would be their cross to bear for the rest of their career: new romantics. 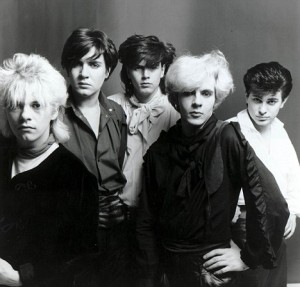 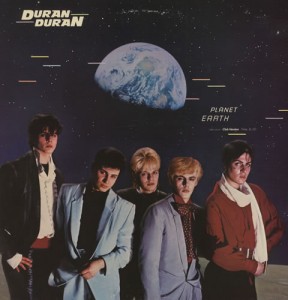 With a camera shutter samples predicting their fate, ‘Girls On Film’ is a statement of frivolity, funk and fun. “We want to be the band to dance to when the bomb drops,” Le Bon has claimed on more than one occasion. Roger Taylor’s simple, organic drumbeat (as opposed to the shiny, black, hexagonal ones which would soon grace the Top Of The Pops stage) plays alongside a loop, declaring the sound of a future thinking band who write and play the traditional way.

It’s impossible to think of DD’s sound, though, without Nick Rhodes’ synthesizers, which don’t shy away on this opening track, swirling through the final verse as if trying to compete for centre stage. The man born Nicholas Bates (who could often be found at one of Andy Warhol’s NYC parties) is half mad-scientist and half pompous-wizard behind his keys, creating cosmic visions that have influenced many musicians since (The Dandy Warhols, who he’d later produce for), and continue to be the constant that defines Duran’s sound from bands whose sound merges with their contemporaries of the time. ‘Planet Earth’ begins the albums journey from upbeat, radio singles to a darker, more seductive sound. While its “bop bop” sing-a-long chorus keeps audiences happy, it’s the drum & bass that drives this track. Rhodes has spoken of his “immeasurable thanks” to John Taylor for switching from lead guitar to bass. On moments like this, where he is locked in with Roger’s drums as if each second were chained, it’s difficult not to agree.

When Duran do what they do well, there is a certain deep, full sound which each moment of the track must keep, encapsulating the listener in a surround sound sort of fashion. From the guitar lick so heavy it could be Nile Rodgers playing (he would do five years later on ‘Notorious’), to synth tricks like glitter being thrown from nowhere; this is their introduction to ‘Planet Earth’. Lyrically it’s poetry – literally. Many of their earlier compositions came from a book Le Bon had been playing with years before his audition. “Only came outside to watch the nightfall with the rain, I heard you making patterns rhyme…” Compared with their contemporaries, and even the “nuclear war” style rhymes they’d later release, this is Keats.

As their career grew, it seems that Andy Taylor’s guitar did quite the opposite. By 84’s ‘Seven And The Ragged Tiger’ it was difficult to pick it out on top of synths that appear to have won the aforementioned battle. Here his 1/5th is still equal. On sparse number ‘To The Shore’, he glides over his colleagues’ inputs, while an actual guitar solo (they did do some of these) overlooks his own gritty stabs. Opposites attracting themselves to Rhodes’ synths, which throughout the album sound like a boy who received a Roland Jupiter-4 for Christmas and was automatically an expert at making it do anything he wanted.

Second single ‘Careless Memories’, considered a failure on release due to its #37 peak, is the band doing pure angst. Playful synths frowning, soaring guitar growling, romantic Le Bon almost swearing, “It always takes so damn long before I feel how much my eyes have darkened”. Its frantic vigour produces an energy unheard of elsewhere on the album, making it not the pop/rock Duran Duran are renowned for, but their attempt at rock/pop. When asked which track sums up their original blueprint of sounding like something between the Sex Pistols and Chic, the band chose ‘Sound Of Thunder’. It doesn’t sound quite like that (what would?), but it does encapsulate the dynamism of Johnny with the funk of Bernard, highlighted on a middle-eight that overpowers that drugged-up disco beat with a Scott Pilgrim-style war of synthesizers and guitar.

Penultimate track ‘Friends Of Mine’ is darker disco still. Le Bon’s chart-throb yelp trades places with a deep, whispering echo, complimented with textures from Rhodes that transform this track into a five minute horror B-Movie. “Why don’t they say I’m wrong, why don’t they drop the bomb?” Le Bon enquires. At least there’d be this to dance to if they did. Closer ‘Tel Aviv’ is a reminder of what Duran could have become had world domination not gotten in their way. No encore style sing-a-long, no words at all in fact. It’s a piece of art; a multi-layered, 5-minute epic, where strings meet robotic, Aztec beats in-between Monk-like wails. And all the while, JT & RT hold the rhythm steady, underneath guitar growls that have become more distorted as the album has played. It doesn’t exactly fit in with the rest of the LP – sounding more like a portfolio for a group of budding film score writers – but it is one almighty crescendo.

With Colin Thurston on production duties – who’d previously worked on albums by the artists Rhodes played while making money as a DJ; Bowie, Iggy, Magazine – a better match could not have been made. They shared a vision of honesty and grandeur; of disco and rock; the music of legends and the music of the future. When Brandon Flowers, Justin Timberlake, Goldfrapp, Franz Ferdinand et al cited Duran Duran as influences – mainly during the reunion of the original line-up, a time when it was considered foul play to not give them some sort of Outstanding Achievement award – it is based on this. A 9-track capsule by a young band who saw themselves as the next Japan. Less dancing on the sand; more floating through space. In a parallel universe, on a different Planet Earth and without MTV, that should be the case.