Gigslutz contributor and Features Editor, Katie Muxworthy, takes a look at one of the records that changed the way she looked at music. Exploring the depths of each track, the ill fated life and death of lead singer Ian Curtis and the aftermath of one of the greatest records of all time, Joy Division’s Unknown Pleasures is this weeks For The Record.

To say I was an easily influenced teen is probably an understatement, but then again I am about to take you back to an awkward 14 year old northern girl, who was desperately seeking the approval of classmates, family and pretty much anyone that had the displeasure of being in contact with my hormone overloaded stroppy self. I dyed my hair a bright red, wore a mysterious sweeping fringe and styled my Nanas knitted cardigans, much to her bemusement, in an attempt to be totally ‘indie’ and ‘arty’. I was also, out of choice, listening to the likes of The Pigeon Detectives, Jack Penate and The Fratellis (remember them?!) and I may or may not have had a Johnny Borrell poster in my room, complete with skinny white jeans.

Now I have set the scene for 2007 me, and quite possibly every other teenage girl that year, I’m going to attempt to claw back what tiny prowess of musical knowledge I like to proclaim to have. Apart from questionable styling choices, 2007 was also the year I heard Joy Division’s-Unknown Pleasures for the very first time. When I say the first time, I believe I had often dismissed earlier listens of Love Will Tear Us Apart on distant radios, not paying more than sub conscious head nodding attention. This was the year I really listened to Joy Division and I think I finally understood how special music could be.

An iconic album cover sometimes has the power to become more iconic than its contents, and with Unknown Pleasures that is arguably so. The duo chrome Peter Saville cover, with its distinctive matte black background and inescapable white sound wave lines is what first caught my attention. Walking past a run down book and record store in one of Newcastle’s cobbled back streets (the shop is now no longer there-RIP decent record stores) Unknown Pleasures was jammed into the window with a million different others. I’d seen it a million times before, that image; it was embedded in numerous forms of popular culture I had experienced. I had seen it emblazoned on walls, I’d seen it stuck on the tops of passers by and I’d seen it tattooed up arms.

Now I knew where the image originated, I needed to listen to the contents of the record it was wrapped around. HMV offered me the first CD that I truly treasured and scratched to unusable quality-the ten tracked, Joy Division-Unknown Pleasures, re-released October 2000 on London Records. 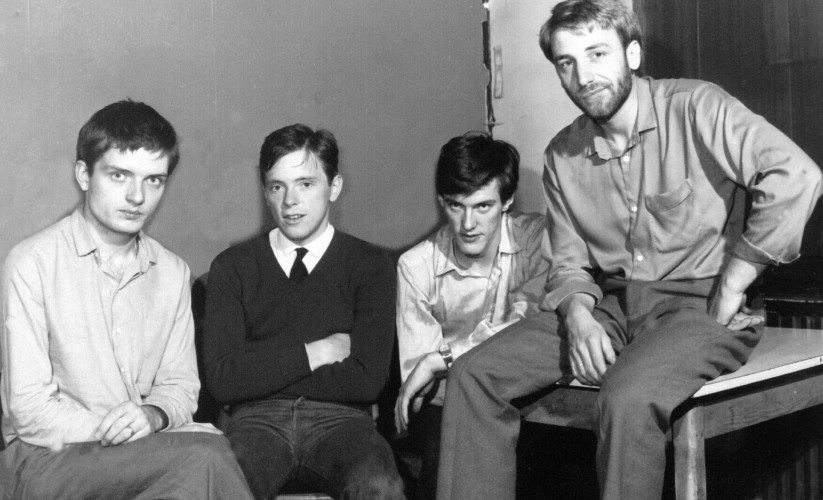 It’s after the first kick of drums and bass that you hear Ian Curtis’s vocals for the first time, “I’ve been waiting for a guy to come and take me by the hand”. It was like nothing I had ever heard before, and it’s what made Joy Division sound nothing like any band that came before them, or ever to come after them. ‘Disorder’ is the first of ten tracks on the record, and its possibly one of the finest record openers of all time. Kicking you in the gut, urgent guitar licks and those penetrating vocals leave no room for breath, the result is clean, precise and cold. Sounding nothing like their punk peers of Sex Pistols and Buzzcocks circa ’78, Joy Division were in a league of their own and started to coin what post-punk was set to be about. It’s easy to be retrospective when listening to the impenetrable claustrophobia on ‘Disorder’ to foresee the premature death of Curtis. The hankering velvety tones, dripping in melodrama, hallowing words from a man who’s marriage was falling apart and epilepsy worsening. But this was to be the opening to a record that was helping the bands popularity rise and embarking them on their first U.S tour. The tour that would never be. A month after his death ‘Love Will Tear Us Apart’ would become the bands first hit.

‘Day Of The Lords’, second track on the record, feels like the perfect place to share my admiration for admittedly eccentric producer Martin Hannett. It’s on tracks such as this that not only the formidable lyrics and rattling drums dominate, the slick unfaltering production gleams thoroughly. It’s from Hannett that we benefit from the wondrous cleaned up deluxe reissues from both the bands essential records, Unknown Pleasures and Closer. It’s rumoured that Hannet used to turn down the heat so low in the recording studio so that everyone could ‘see their breath’ whilst they worked. There are stories that he requested Morriss to dismantle his drumkit and reassemble it using parts of a toilet. It was Hannett’s suggestion to record the creepy clatter of the studios lift and that Curtis recorded his vocals down a telephone line, to make them sound as distant as possible.  Would it not have been for this curated form of haunting ambience would the band have created such an inescapable disconnection and discomfort in their sound? Much of the icy bleakness on Unknown Pleasures, is rightfully or wrongfully so, most definitely to Hannetts credit.

“Forced by the pressure, the territories marked, no longer the pleasure. Oh, I’ve since lost the heart. Corrupted from memory, no longer the power, it’s creeping up slowly, that last fatal hour.” Slow, sinister bass lines from Hook are all that is needed to accompany the incomparably dark words of Curtis in ‘Candidate‘. Simplistic in its conjuring of chilled grey atmospheres and overwhelming power, it’s a track that is often over looked through out Joy Divisions back catalogue. However, its tracks like ‘Candidate’ that, to me, make Unknown Pleasures deserved of its cult status. Another prong to a well developed record that with each sleekly played note, chillingly sang lyric and overwhelming beat, it keeps you on the edge of your seat just as much as it engulfs you.

A baseline that tauntingly flirts with every part of you through its faltering tempo, ‘Insight’ comes at just the right time on the record, driving the full intensity of what you can imagine would have been encapsulating upon stage. Emotional contrasts appear all over this track, engraving the powerful unease after each listen, the verses are in a major key a stark powerful contrast to the sinister ending. Unsettling and frantic electronic ‘zaps’ only add to the intense bizarreness of ‘Insight’, the production only intensifies as upon every listen I believe Curtis less and less as he almost terrifyingly sings “I’m not afraid anymore”.

Personal confession, I knew I was going to get along with my best friend the first day she revealed to me a ‘She’s Lost Control’ tattoo, not simply because we had both previously been harrowingly confused teens that found solace in depressing lyrics and the haunting depths of Ian Curtis’ tones, but because she had her own interpretation of the infamous track too. On track six, ‘She’s Lost Control’ addresses the time Curtis saw a teenage girl have an epileptic fit for the first time. “Confusion in her eyes, she’s lost control again.” As to every great song, interpretation can be an unconsciously brilliant thing, and although the lyrics tell a tale of Curtis’ own witnessing experiences, its the scary foreboding of himself later being diagnosed with the illness that sits so powerfully yet uncomfortably with you on every listen. Not only describing the physical loss of control the girl experiences, Curtis delves deeper “She’s clinging to the nearest passer by, She’s lost control, And she gave away the secrets of her past,” It’s in this track we hear the first sounds of a new drum kit too, accompanied by possibly one of the bands most memorable, and best known, unsettling bass hooks. It is also one of the best tracks you will catch Ian Curtis’s distinctive dance moves to (see below)

My personal highlight comes in at track seven, ‘Shadowplay’. This was, and still is the track that I listen to when I’m feeling any bout or form of emptiness/loneliness. When you feel the hankering of company, the simplistic 12 lines track envelopes you in a way that is almost comforting in its icy embrace. It’s within the last few minutes that guitarist Sumner’s distinctive metallic wails bounce of Hook’s incomparable treble-flirting bass line wave over you, drowning in the sheer intensity of the heavier post punk noises they produced. Morris’ drums provide the dark fringes of contagion that makes every Joy Division song so enticingly excellent and inescapable. 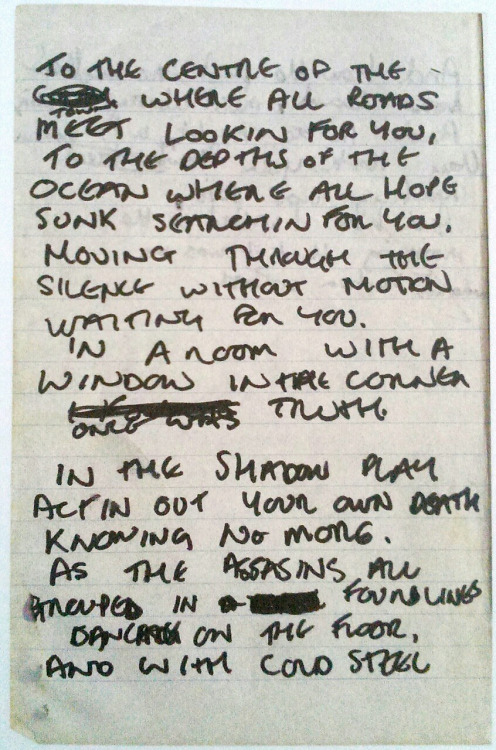 ‘Wilderness’ and ‘Interzone’ are stark contrasts that follow one another, with their only similarities being in their 2 minute length. The latter a slower paced, introspective, minimal track with an interesting rhythm that almost centers around its sliding baselines and reverbing guitar locks. Chilling lyrics and starkly conjured atmospheres make for another brooding classic, that hits you full throttle on even the first of listens. The former is comparatively a short, sharp hitting punk track that plays with vocals and urgent guitars that is possibly the closet thing to recognisable punk of its decade. Short bursts of energy, panned vocals and unsettling distant whispered screams; it’s one that I automatically turn up upon every listen.

Easily the darkest, most harrowing song, some mean feat on the whole record, brings Unknown Pleasures to a close. Even the title ‘I Remember Nothing’ seems fitting for the musical journey you have just unquestionably experienced, feeling spent, confused, scared and overwhelmed by every note and word, Unknown Pleasures leaves you with a haunting climax, that by any ears is pretty damn scary. Unsettling effects of broken glass catch you off guard as elongated vocal echoes and distorted aggressive bursts of chords allow the track to feel like its coming not just from your speakers but from your own soul. Ending a dark album, on the most sinister note possible, a final crash of glass and a faded chord.

Joy Division- I Remember Nothing

Perhaps Unknown Pleasures to me, sits closely to my own, and undoubtedly every other humans, obsession with the hauntingly morbid and the powerful realisation of self regression and the unpredictability of life itself. Unquestionably the history of the Manchester foursomes journey, their ill fated singer, and the stark era of their surroundings add to the intensity of power to the record, however, to me I like to think that it’s through the questionably unconventional production, the hauntingly beautiful, romanticised words of Curtis and Joy Division’s ability to change the course of music that makes Unknown Pleasures so special.

“Existence— well, what does it matter?
I’ve existed for the best use i can
The past is now part of my future
The present is well out of hand.” -Ian Thomas Curtis

Ones To Watch: Jackals Rose