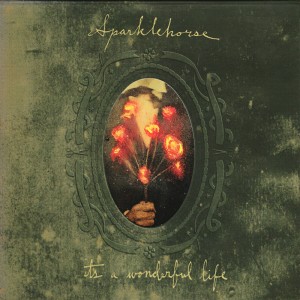 Thinking back, this was the first album I ever sat down and listened to.

It was 2012, there was actually a sun in the sky for large parts of the summer and I’d moved in with my girlfriend. I had a handful of throwaway part-time jobs and once I’d spent my money on the necessities (food and weed) I’d go record shopping.

The record store was a poorly organised affair, but that allowed me to spend large chunks of my afternoons flicking through dusty sleeves.

I’d heard of Sparklehorse but never listened to their songs, so when I found the record and had a spare £8 in my pocket I figured they were worth a punt.

Back home, the batteries were dead in every remote, keyboard and electrical distraction I owned, so I sat on the floor, put the record on and gave myself to it wholly. The needle dropped onto the vinyl and the warm analogue tones of the organ rolled over my brain as the weed smoked stroked my lungs. I knew something special was happening.

An hour later my girlfriend came home and found me crying on the floor.

She asked what was wrong and I choked out, “You need to listen to this,” before I dropped the needle at the start again.

Released in 2001, the record escaped the plaudits it deserved. It wasn’t overlooked entirely, but the year was kind to music fans; HMV’s shelves were full of Daft Punk’s Discovery, The Strokes’ Is This It, System of a Down’s Toxicity, Jay-Z’s The Blueprint and Destiny’s Child’s Survivor.

It would be too lazy, and too cruel perhaps, to say It’s a Wonderful Life came to fruition after Linkous saw life from another perspective after an accident left him wheelchair bound for six months.

He was forced to recount his brush with death to almost every journalist he spoke to and it’s believed the title track’s chorus – Linkous mindlessly repeating “It’s a wonderful life” – is his fuck you to reporters who wouldn’t drop the incident and, perhaps through that clouded view, failed to see the pinpricks of light tucked away in his seemingly somber songs.

The first two Sparklehorse albums, Vivadixiesubmarinetransmissionplot and Good Morning Spider were arguably stilted by their lack of focus and direction. By writing, performing and producing those records himself, Linkous afforded himself no filter. While complete creative freedom sounds like a wonderful meadow to skip through, it’s easy to get lost and difficult to find the path again.

In the documentary Mark Linkous is Sparklehorse Linkous says that isolation forces country people to improvise sounds. And while this record has isolation etched into its bones, opening up his Sparklehorse project to others allowed Linkous to shape his masterpiece.

Linkous’ lyrics are as bizarre as ever, making me wonder if he can possibly be stowing any hidden meanings away in the madness: “And drown all the clocks ‘til there’s none / Little ambient in the sun” (‘Gold Days’) and “Can you feel the rings of Saturn of your finger? / Can you taste the ghosts who shed their creaking hosts?” (‘Sea of Teeth’) being two of my favourite examples.

And the instrumentation on offer is just as eclectic throughout; the gritty guitars in ‘King of Nails’ chatters across the track like TV static breeding angst in the fuzz, before hurt takes on a very different guise with the limping piano of ‘Eyepennies’ where Linkous and PJ Harvey’s voices twirl around one another in the ether.

‘Dog Door’ is the track that divides opinion – all throbbing bass and Tom Waits. But then the record rolls back into familiar territory with ‘More Yellow Birds’ and the loudness is forgotten as quickly as it came.

A common trend amongst today’s bands is to finish a record with a wall of noise, whereas It’s a Wonderful Life chooses a slow fade to nothingness as ‘Babies on the Sun’ flickers like the final embers of an idea. The hidden track is more a dream than a real entity.

It’s a Wonderful Life is one of those rare time-capsule albums that was recorded at just the right time in an artist’s career. Collectively, I believe, those 12 tracks capture an honest imprint of Linkous’s soul. I can feel his loneliness and resilience in every quiet nook. I feel like I’m stood outside the window of his house watching him go about his day.

I have never been able to listen to this record indulgently. When it feels necessary, and only then, I’ll close the curtains, put this record on and lay on the floor in the blackness. For the next hour am I nothing more than Sparklehorse – and that’s a wonderful life.