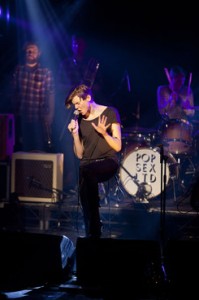 Converse have been putting on a load of free competition gigs over the last few months and we were lucky enough to invited down to the legendary 100 club to see Sunderland’s finest Frankie & The Heartstrings.

This was the first gig Frankie and his merry men had played or a long time. And you could tell. And I don’t mean that in a bad way. The Mackem 6 piece have been recording for the last few weeks in London with Bernard Butler and have apparently been going a bit mental with being cooked up in a studio which has led to them tweeting pictures of the genitals and carrying around fake dog shit with them wherever they go. Well, they were proper up for it tonight. Even if the crowd weren’t. These free gig competitions always hold the danger of people entering who aren’t really bothered and thus having a half arsed crowd, which was evident here.

That didn’t seem to bother the band too much though as they slung out a set top heavy on new material. And the new stuff is sounding good. For fans of their power pop debut album, worry not. There is no avant-garde jazz creeping in there or any of that bollocks, just the same try and tested formula and the results appear to be good. Frankie is also looking more and more the part every time I see him. When FATHS were getting together Frankie was not going to be the front man however he has grown in to the role and keeps getting better. His hair growing competition with Justin Young of the Vaccines helps also!

He and Dave were on good form trying their best to get giggles from the subdued crowd. As well as the new stuff the first album favourites such as the pizza topper ‘Hunger’ and ‘Ungrateful’ were in the set also with standard set closer ‘Fragile’ to which Frankie took a walk into the crowd. All in all the new stuff along side the older material sounds great, nearing guitar pop perfection. The new album could push FATHS into the mainstream which wouldn’t be a bad thing at all.

They are also giving away their new single ‘I’ll still follow you’ away for nish, so get to www.frankieandtheheartstrings.com to snaffle your freebie.