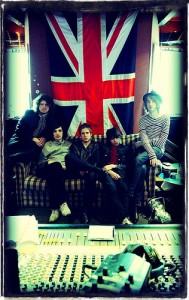 Britain invites the world to attend a virtual alternative rock festival (averages 15,000 music fans watching per month and rising), of recommended rock / alt rock. GigSlutz will be part of the action.

Marner Brown are taking a break from recording their debut album to play this show. They have earned massive respect from the likes of Ocean Colour Scene and Rolling Stone, Ronnie Wood, with their hard rocking tight set. The future of British Rock is in great hands. The band have just signed a deal with classy motors, Alfa Romeo. Get exclusives around the new LP via pledgemusic.com/marnerbrown

Rev78 make friends and influence people win an unashamedly epic set borne of Joy Division, The Killers, The Smiths and Editors. Currently recording follow up material to their influential debut album, ‘Boy In The Blitz’, this is something so uplifting and energetic that official reviews of their City Showcase set at the 100 club were simply “amazing”.

Bad Wolf are back at Playhard by request. When a punk bassist, metal fan drummer and Muse and Mansun inspired singer/guitarist come together the impact is instant. Since their April appearance they’ve received international acclaim and offers of shows. Ready to set 2013 alive, this is a public service announcement, with guitars.

Playhard is honoured to have a super group end of tour party live on stage to open this evening’s show. Jonny Lives! and The Killing Floor caught the very last planes outta New York City before the storm hit. Fronted by Rock n Renew’s Jonny Dubowsky, this one goes out with love and heart to the planet.

GigSlutz was at the International Live Music Conference 2012 (AEG, Live Nation etc) when these streams launched. Steve GigSlutz has caught up with Playhard, BandWagon Gigs, Bluetones front man Mark Morriss and rPlayhard DJ, Jon Brookes of The Charlatans, there. Since March, alongside the shows at Purple Turtle, this travelling circus has staged events in Birmingham and Edinburgh Festival. Playhard also hosted the VIP Bar after parties at Leyton Orient Football Ground and O2 Soccer Dome for Soccer Six.  Feedback for Playhard is encouragingly fantastic. The crew of documentors, technicians and presenters are creative stars and the DJs and door staff are performing talents in their own right.

This is genuine word of mouth and net. Authentic with rock n roll passion, wild with adrenaline and inclusive with its welcome being there is cross breeding its own scene. The gang is growing with musicians, photographers, writers, film makers mingling with real entertainers on stage (and a cheap bar!). Playhard’s co-creators mix their industry expertise with a massive army of mover shaker friends in at every level.