Diamond Dogs contains arguably two of Bowie’s most iconic tracks to date (‘Rebel Rebel’ and ‘Diamond Dogs’) and yet it still remains largely underrated in relation to the remainder of his discography. The record celebrated its 40th anniversary earlier this year, marking a turning point not only in Bowie’s career but also the rock scene on a wider scale. Following the brief life-span of the chic alter-ego of Aladdin Sane and the stop gap of Pin Ups,  Bowie was ready to make the transition from Glam Rock to deeper depths. The result of this was the emergence of a hybrid album which was a mystifying combination of an attempt at a musical adaption of Orwell’s 1984 and a final encore to the era of Glam Rock. 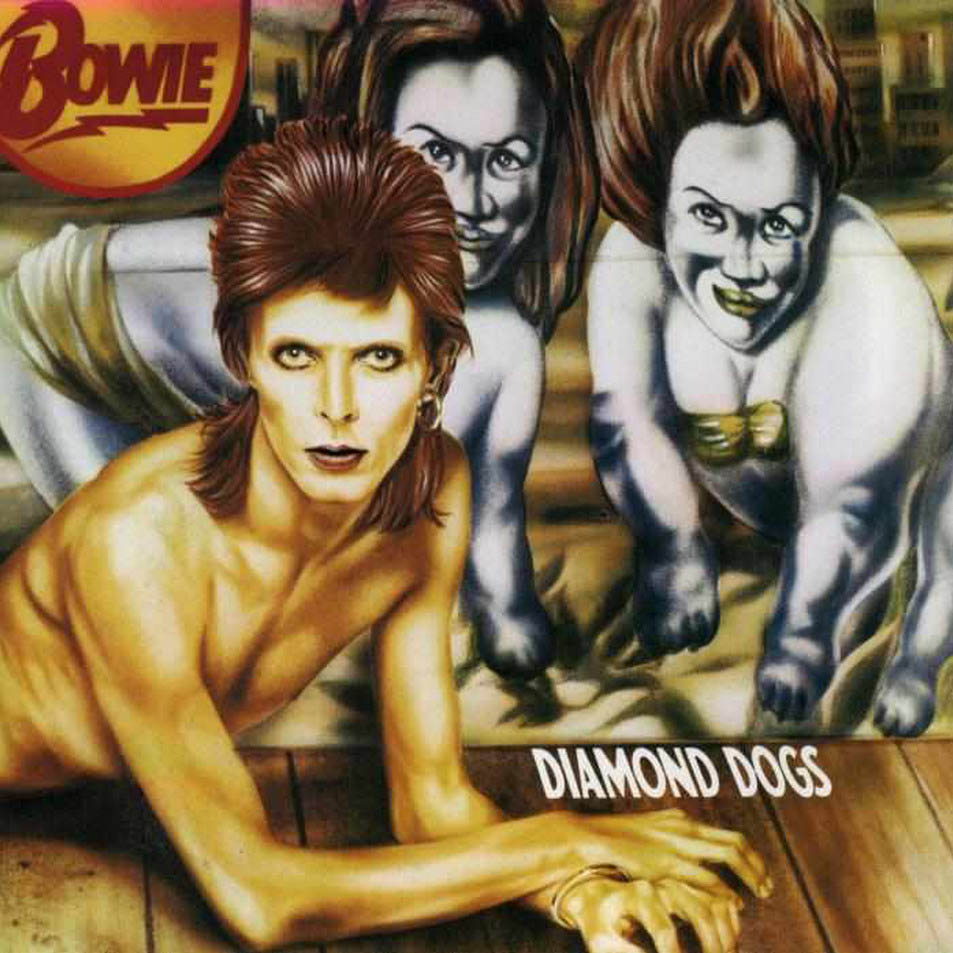 The disturbing, sexualised mutants adorning the cover provided the promise of what tricks Bowie had up his sleeve for his sudden U-turn. If Ziggy and Aladdin were the androgynous, glamorous beings of another world, Halloween Jack was their rogue, pirate-alien counterpart. The opening track ‘Future Legend’ introduced Bowie’s new vision of his post-apocalyptic dystopia.

as the last few corpses lay rotting in the slimy thoroughfare

the shutters lifted in inches

In case his fans hadn’t worked out yet that Bowie was distancing himself from the feel-good rock n’ roll glitz, he added the disclaimer “This ain’t rock n’ roll! This is genocide!”

While ‘Future Legend’ was the setting, ‘Diamond Dogs’ was the debut of Bowie’s brand new character The Halloween Jack.  Despite the nonchalant eye-patch, the flickable hair and eye-watering tight trousers, The Halloween Jack remains one of Bowie’s lesser known alter-egos who is often over-shadowed by the likes of Ziggy and The Thin White Duke.  A shame for a character who “lives on top of Manhattan Chase, the elevator’s broke so he slides down the rope”. 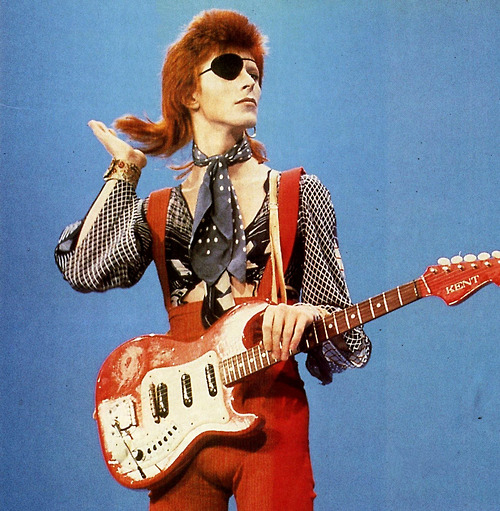 The freaks and mutants introduced in ‘Diamond Dogs’ are intriguing creatures (“her face is Sans feature, but she wears a Dali Brooch”) but then comes along ‘Sweet Thing’ which abruptly changes the mood of the album, but still maintains the surreal landscape. The opening line “It’s safe in the city, to love in a doorway” may be reminiscent of adolescent love but then the track turns darker with “If you want it boys, get it here”.  However, delving this far into the lyrics could perhaps even be a waste of time. Bowie aided the chaos of the album by adopting the unorthodox method of randomly piecing together cut up words in order to create his verses. To confuse matters further the song is often referred to as ‘Sweet Thing/Candidate’ due to being sliced in half for ‘Candidate’ – another ode to Orwell- to be wedged into the middle. 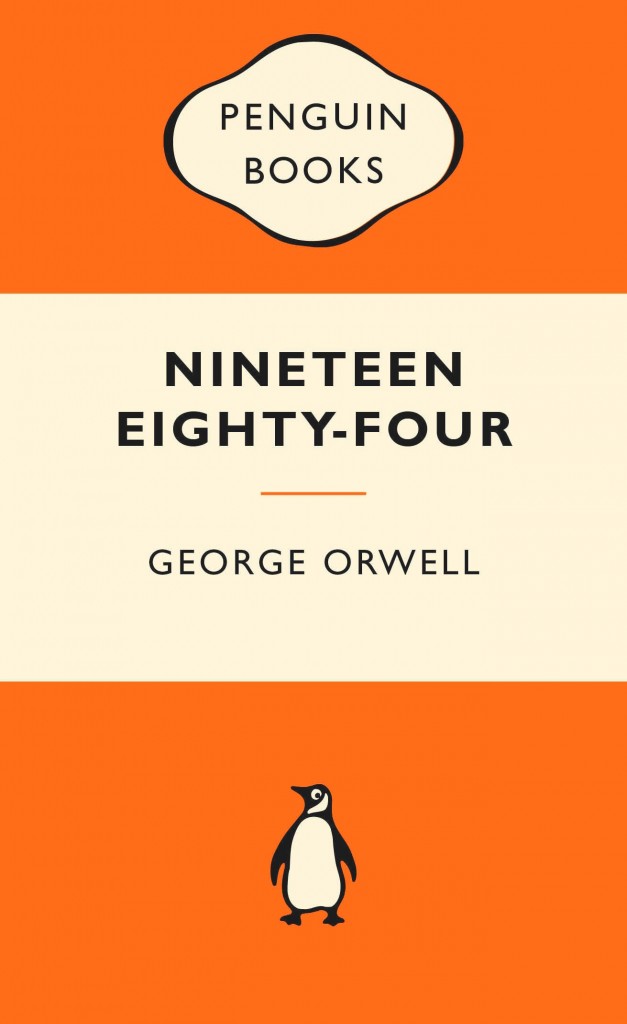 ‘Sweet Thing’ and ‘Candidate’ offer a strong, dark core to Diamond Dogs but due to being tied into one another, they will most probably always find themselves confined to the album. Yet ironically hot on the heels of ‘Sweet Thing/Candidate’ is the anthem of all Bowie fans and perhaps even a track that defined the early 1970’s, ‘Rebel Rebel’. Slipping back into the familiarity of Glam Rock, the track contains what could possibly be one of the most iconic riffs of 20th Century rock. Bowie said of it himself “It’s a fabulous riff, just fabulous! When I stumbled across it I was like ‘Oh, thank you!'” . Most Bowie fans argue that the resounding celebration of androgyny also links in with the album’s 1984 concept. Within the plot of 1984, Winston (the protagonist) notes how Julia (his love interest) conforms to the State-approved gender neutrality, but she later on secretly defies this by slipping into a dress and a full face of make-up in an act of rebellion.

You want to be there when they count up the dudes

and I love your dress.

so how could they know?

So loved was ‘Rebel Rebel’ that the track was re-worked for 2003’s Reality before merging with ‘Never Gets Old’ to give birth to ‘Rebel Never Gets Out’. ‘Rebel Rebel’ could arguably be Bowie’s swansong to his Glam Rock days as the gentle piano lines and scratchy guitar work of ‘Rock n’ Roll With Me’ takes Diamond Dogs down a melancholic, vintage avenue. In addition to the dark, sexual undertones ‘We Are The Dead’ it was made clear that Bowie was shutting the door on the Glam Rock chapter.

Just like the creatures on the album’s cover, the end result of Diamond Dogs was a strange, mutant-hybrid. If the original intention was to produce a musical adaptation of 1984, it’s a small relieve that Orwell’s widow denied the rights if the cheesy album closer of the same name is anything to go by. Despite this, Diamond Dogs is an underrated gem buried under the rest of Bowie’s discography. The album did not just mark a crossroads in Bowie’s career, but the British music scene on a wider scale. Bowie has always been lauded as the Pied Piper of music and where he treads his contemporaries are sure to follow.  The result of this being what some have described as the “deglamification” of the rock scene. In addition to this, the dystopian landscape in which Diamond Dogs was set anticipated the pessimistic mood that was about to hit the remainder of the 1970s. “My protest” Bowie stated of the album, “more me than anything I have ever done previously”. Which you could argue paved the way for the Punk revolution which was to shortly follow.