“Who let you in? Press aren’t supposed to be here yet! Where is security?” They were the first words I was greeted with as I arrived at West London’s Porchester Hall for this year’s Urban Music Awards. Petrified for my very first outing as a roving reporter, I began to wonder what the hell I’d signed myself up for.

Confusion aside, my early arrival actually proved to be beneficial and after getting hyped up on the copious amounts of Red Bull that was on offer, I took prime position in the press area for the red carpet arrivals.

As the array of stars started to roll in, The Only Way is Essex star Jasmin Walia and Amelia Lily brought a sprinkle of reality star glamour to the occasion while the likes of Shakka, Big Narstie and Benny Bizzie represented the UK urban scene with their own unique trend.

With the award ceremony now in full swing, East London grime artist Ghetts quickly came through as one of the evening’s first winners after picking up the gong for Best Male. Speaking humbly about his achievement Ghetts said “I just want people to embrace my music. For me, that’s what it is all about. I’m really thankful for this award but I just want my music to be heard and for people to appreciate the work that’s gone into it.” 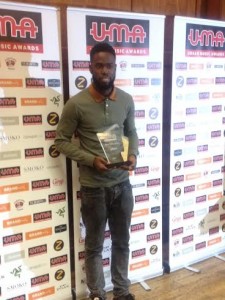 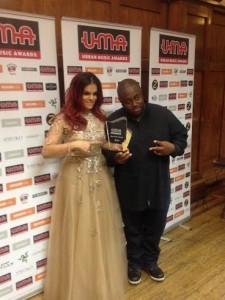 Next up was 2012 X Factor runner up Jahmene Douglas. Equipped with his infectious giggle and polished award for Best Newcomer the gospel enthusiast treated the packed press room to an impromptu rendition of ‘Jesus Loves Me’ but not before he shyly confessed his secret love appreciation of the occasional Celine Dion track. Admitting his lack of preparation for the night he said “I feel like I made such a fool of myself when I went to accept the award. I didn’t prepare a speech as I didn’t think I was going to win!”

On the other end of the preparation spectrum and fully poised for his success was Ghanaian born Fuse ODG. Emerging from the night as the most decorated UMA-er, the Afrobeat extraordinaire scooped an impressive four awards being named Artist of the Year and getting the accolade for Best Music Video, Best Collaboration and Best Single for ‘Antenna’. Proclaiming his plans for “world domination” in 2014 Fuse said, “I want to keep raising the platform for Africa and make more music. I want my music to crossover to so many other territories. The album is coming out next year and I want to do a world tour to keep elevating my continent.”

As the night draws to a close it’s easy to see how the Urban Music Awards has developed from strength to strength. With more and more artists embracing the recent “afrobeat” explosion, there’s never been a better time to celebrate the urban origins of various musical genres so here’s to another successful 11 years for the Urban Music Awards.

View all posts by Rachel Akiboye →