A solid performance from the Gothic rocker and electronic pioneer, with a focus on recent LP Splinter.
Rating:

I felt rather out of place, smothered by the multitude of 50-year-old beer bellies, hailing the arrival of Gary Numan. After being temporarily blinded by the hallucinogenic strobe lighting and choked by the smoke, he finally emerged. At that moment, I knew it would be a good night.

Opening with ‘Resurrection’, Numan built suspense; the instruments were haunting and the vocals mysterious. This, along with the trippy light show, created something quite out-of-this-world. The crowd seemed to be in a trance, nodding their heads in sync. My only criticism, however, is that the vocals were too low in comparison to the instruments, so Gary’s voice got lost in the music – but this was sorted very shortly.

He followed with ‘I Am Dust’, a track from his 2013 album Splinter. Despite being 34 years after his most successful single, ‘Cars’, he certainly still has the gift. A deep bass that made the floor vibrate, enthused with funky electronic keys made it an astoundingly breath-taking experience. Thirdly, Gary became so entranced by ‘Metal’, that he knocked the microphone off the stand into the audience, but he just took another and wasn’t even fazed by it. 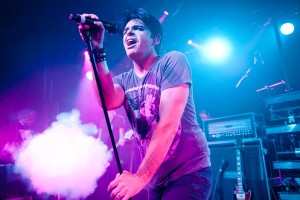 He continued to play a variety of hits from various albums, including ‘Here In The Black’ and ‘The Calling’. It’s the kind of gig where you can’t not move your body – the music just won’t let you stand still. Despite the sweaty, clammy, confined conditions, everyone appeared content. The intimacy of the venue allowed us all to feel embraced by the mood of the music.

Eleventh in the setlist was ‘Absolution’, which morphed into ‘Cars’. This caused enormous cheers, and even the 50 year old men stopped drinking their beer to raise their arms in appreciation of the techno breakthrough. Gary played three tracks off his current album Splinter (Songs For A Broken Mind) before chilling us with the dark undertones of ‘A Prayer For The Unborn’. The band then walked off stage, followed by the chanting of “NU-MAN, NU-MAN!” alongside echoes of hope and applause.

Strolling back on stage, Gary delivered the catchy, groovy, hip-jolting ‘I Die: You Die’. Next, to the audience’s delight, he played ‘Are ‘Friends’ Electric?’ – the highlight of the night in my opinion. Gary used the keyboard and vocals alone for the verses which were much more laid-back, but then the chorus was much heavier – almost head-banging heavy. I much preferred this version to the recorded one.

Lastly, Gary ended with the sleepy, calming, husky ‘My Last Day’. Having not spoken to the audience all night, he walked off inconspicuously. A mysterious man of little words but a massive stage presence. Overall, I thought the setlist was well varied, with an expected emphasis on Splinter, but Gary still pleased the ageing crowd. I was however slightly disappointed ‘Music For Chameleons’ wasn’t on the list.

In conclusion, it was a fantastic, surreal experience and I would recommend seeing Gary Numan to anyone, any age.

View all posts by Emily Burrows →