It’s an unexpectedly warm Thursday night in June and George Ezra is stepping up to play Manchester Academy 2 – a huge jump up from his last headline Manchester show at the Deaf Institute. This time he’s brought his band along and I’m super excited. 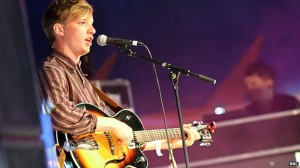 I arrive half way through first support act Port Isla’s set, entering as they finish ‘Sinking Ship’. (I’m not pleased with the Metrolink “making Victoria posh” as it’s causing delays I don’t appreciate. If you’ve ever been on a Manchester tram you’ll understand there’s nothing posh about it.) Moving on, Port Isla’s next track ‘1953’ sees frontman Will Bloomfield head to his keyboard for a new song filled with beautiful chords and harmonies that take over the room. Chit-chat with the crowd ensues as Bloomfield tunes his guitar, admitting his happiness to tour with Mr Ezra and losing his “Georginity” before finishing with their latest single ‘Steamroller’ – a happy go-lucky single reminiscent of a Norwich version of the Avett Brothers.

A short wait in the increasingly warm room is followed by Dancing Years, a five-piece folk band filling the big room with their stirring, melancholy tunes like ‘We Danced Last Night’ and ‘Here’s To My Old Friends’. The highlight of the set is a cover of ‘Anthems For A Seventeen Year Old Girl’ by Broken Social Scene. A slowed-down version with a nicer, Alex Trimble-esque voice takes this reasonably simple song to a whole new level. The softer vocals and viola make this number so much smoother and relaxing, yet reaches a greater climax of emotion than the original. This cover makes a big impact on the crowd, getting the loudest cheer of the night so far. 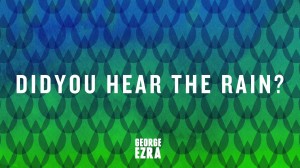 A huge black and white backdrop emblazoned with the block letters ‘GEORGE EZRA’ – with debut-EP-respective blue and green lights – is all we can see until the man himself appears to tumultuous cheers and screams from the crowd. The set begins with the first track from his upcoming debut album, Wanted On Voyage, a tambourine soaked ‘Blame It On Me’, followed by new tracks ‘Drawing Board’, ‘Listen To The Man’ and ‘Barcelona’. Despite having some lovely music to enjoy, some of the Manc ladies decide that all of these new songs are a bit boring and shouts of “SEXY!” ring through the applause after every song. Ezra suffices with some uncomfortable laughs, which is probably for the best. (When shouts of “I want to cum inside you” littered Benjamin Francis Leftwich’s gig at the same venue two years ago, Leftwich decided to shout back, which made for some uncomfortable moments.)

To stop the onslaught of fangirling shouts George Ezra treats us to ‘Cassy O’, his most upbeat and rousing song to date, getting the crowd dancing and bopping along to the beat. The highlight is definitely not his Irish number one fans behind me screaming during the quiet bridge section, “PLAY THE CHORUS, JOHN!” It says his name on your ticket, come on girls. Ezra then continues with some quiet, stripped back versions of ‘Over The Creek’, ‘Living It Up To You’ and ‘Stand By Your Gun’ without his band, and it just shows what an incredible musician he is all round. The band return and finish off the set with ‘Budapest’, probably his most loved song, about a place he’d never visited until his recent ‘Ezra Express’ train journey to the city – and he admits it wasn’t quite what he expected.

The annoying Irish girls leave before the encore, uplifting my mood before George returns to play the beautiful ‘Benjamin Twine’ and ‘Did You Hear The Rain?’ His debut single and break out song totally embellishes Ezra’s huge soulful voice and to hear it live is a real pleasure. He begins the song acapella and the incredible tone to his vocals totally fills you up inside so that listening is all you can think about doing.