J. Willgoose Esq. of Public Service Broadcasting, enthusiasts of Wartime-era Blighty, purveyors of fine neckwear and one of the 2013’s hottest acts sits down with Elliott Homer to talk endless touring, the pitfalls of critical success and the inspirations behind debut album Inform-Educate-Entertain.

It’s Saturday 18th May at The Institute, Birmingham and a sizeable queue of punters is developing outside the venue of Public Service Broadcasting’s latest gig a little earlier than expected, even for a Saturday night. Tonight they face unenviable competition from the Eurovision Song Contest, the Doctor Who series finale and Where Eagles Dare, which is being aired on TV for what must be the millionth time. “There’s definitely an overlap on two of those, I’d say” jokes the colourfully monikered J. Willgoose Esq., leader, multi-instrumentalist and one half of the group with drummer Wrigglesworth, unfazed by the prospect of a throwdown with the Doctor, “My clothes are better than Matt Smith’s. They definitely nicked the bow tie look from me! I was doing it in 2009. I can prove it!”

Despite the entertainment on offer elsewhere the gig is a sell-out and the stage times have been unexpectedly pushed forward so the bands are rushing to soundcheck before doors open. The unpronounceable XTXGXWXSXCX, bafflingly known as The Grafham Water Sailing Club are supporting and it’s impossible to leave the dressing rooms, stage left, once the band has occupied the tiny performance area. Complicating matters are the stacks of analogue TV sets around the stage, there to provide visuals of archive footage to accompany the performance. “We’re not playing massive stages at the moment so it’s been interesting squeezing everything on”, explains Willgoose. 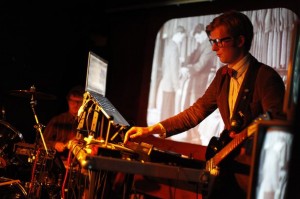 Once finally freed from backstage and with some assistance from tour manager Giles (all tour managers are called Giles, Fred or Brian, it’s just a fact of life) we find a suitably quiet room to sit down in the labyrinthine building, a dusty, long-forgotten stage that gives our chat a vaguely Phantom of the Opera-vibe. Exchanging pleasantries it’s clear that J. Willgoose Esq. is exhausted. What was originally announced as a 46-date tour of the U.K. has been extended: “When it gets to the sixth show in a row, you start feeling it” says Willgoose, “We’ve probably done about 50 already this year”.

Despite an almost never-ending touring schedule, PSB’s current tour officially began this month in support of their debut album, Inform-Educate-Entertain. It’s worth noting, they are aware of the shared acronym with Pet Shop Boys; their Twitter handle is @PSB_HQ ,“If people have a go at us, I say fair enough, they got there first”. The record continues the formula established on last year’s The War Room EP of indie rock with electronic elements. Uniquely, however, the group employ clips of old propaganda and public information films in place of vocals. The band describes their approach as trying to “teach the lessons of the past through the music of the future”. The record has been critically acclaimed, The Independent describing it as “a sampladelic delight” and Q magazine calling it “brilliant”. Willgoose is pleased with the critical reception but remains unlikely to get carried away “I’m trying not to pay too much attention. It’s nice, I suppose, but if you look to that for validation you’re in trouble. I’m sure we’ll end up getting a kicking at some point” adding dimly, “It’s better to ignore the highs and wait for the lows”. The release hasn’t been without its share of criticism, The Guardian’s Alexis Petridis assessment of the group was that they are “more a concept than a band”. If this is the proverbial kicking Willgoose feared, then it’s surprising that the frontman is merely frustrated “There is a concept behind it but I think people get too focussed on the perceived limitations of it rather than where you could go with it” and as Dr. Seuss wrote, oh, the places you’ll go!

PSB have added a second date due to demand at the Village Underground in Shoreditch to follow a sold-out homecoming show, the second selling out even quicker than the first. In June the band is heading to the Mediterranean climes of Turkey for the Vodafone Istanbul Calling festival while July finds them supporting The Rolling Stones in Hyde Park alongside Jake Bugg and The Horrors. Willgoose remains humble in light of such success “It’s just like any other show”.

Typically English humility and understatement are recurring themes of our conversation and PSB’s live show. With no vocals and therefore no microphones the band communicate on stage through a robotic voice creating a neat parody of the patter one might expect from Sir Mick for example, Willgoose’s laptop soullessly relaying the message “Thank you. We have always wanted to play…” followed by a pregnant pause before finding the correct button, “…Birmingham”. Thankfully though, while their bookish appearance undercuts any notion of rock ‘n’ roll, their electrifying live act is a welcome reminder that you haven’t come to a history lecture. No wonder the Stones came calling.

Willgoose tempers his excitement to play what will be the band’s biggest shows yet with another typical English mood, pessimism, expecting the occasion to be like a festival or as he succinctly puts it “Sling ‘em on, get ‘em off again”. 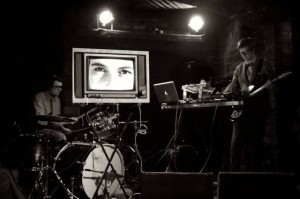 You might expect that the news that the B.F.I. have opened their archives to PSB to be equivalent to Indiana Jones finding Area 51 however he states “It’s metaphorical, sadly” confirming his unbreakable grasp on reality. Ask about his inspirations though and his eyes immediately light up. The Holy Bible by Manic Street Preachers is a favourite, cited so often “I’m sure they’re sick of hearing it” which still doesn’t stop him waxing lyrical for three minutes, while The Avalanches’ 2000 single Frontier Psychiatrist is described as “one of the best four minute pieces of sample-driven pop there’s ever been”.

The final impression of Willgoose is a shrewd one, for a band with one eye on the past; their leader is always looking at the future. He’s wary of success and mindful of the limited staying power of PSB: “It could get old, no pun intended. There’d be a danger of becoming a novelty”. Until then, there’s only one thing for it, Keep Calm and Carry On.

STONED LOVE – My life with The Stone Roses