“It doesn’t matter what age you are, if you have the talent and are good at what you do, that’s the most important thing” Ross Farrelly, The Strypes

It hasn’t taken long for Cavan lads, The Strypes, to conquer what every teenager wishes they had the chance to do – join a band and tour the world. But even though they have played some of the biggest festivals, supported some massive names and released a fantastic debut album; last week saw them take on their first headline UK tour. Gigslutz Rachel Young caught up with The Strypes before their gig at The Institute in Birmingham and the after their set at Manchester’s Academy 2 to discuss their new EP, Dr Feelgood, America and Disneyland…! 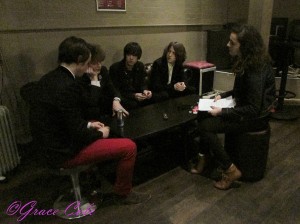 Gigslutz: So the new EP was out this week, do you think it’s gone down well?

Pete: We’ve had a great reaction to the songs live on the tour so far, it’s been great!

Evan: It went to number 2 in the Irish album charts, which we were all very happy about.

Josh: I suppose online, Twitter and Facebook, and people giving feedback on there, it’s been very positive.

Gigslutz: Your influences used to stem from one place, Evan your Dad’s record collection, but do you think that’s changed now you’ve been travelling and meeting new people?

Pete: Well, we kind of got more into punk and new wave as we’ve been touring, but then you go home and find that those kind of CD’s would be in the house anyway… so you could say it’s always been there from the beginning!

Josh: I’d say your friends influence you, we all influence each other and we’ve met others in bands that have turned us on to new things as well.

Gigslutz: You’ve said in the past that Dr Feelgood and Elvis Costello are a massive influence to you all, what is it about their music, which you specifically love?

Evan: Its power and authenticity…

Pete: It’s was a difference to all of the complicated Prog Rock shite… It got back to basics!

Evan: It is the basic appeal of just falling to the floor, 3 chord, rock and roll that for some reason speaks to people of all ages no matter where it’s from or who is making it. It evokes this instant reaction within people that makes them get up and dance. It’s the best sort of music!

Gigslutz: Simple but the best! So you’ve just come back from America, is there anyway of summing that experience up?

Josh: To me, it was exactly how you think it would be in a film. You watch a film with New York in it, and that’s what it’s like.

Pete: We met the typical Americans…

(The band all nod in agreement with smirks on their faces, I wonder who they met?)

… But in New York it was a solidly Irish crowd.

Josh: But we all got so excited because we had never been as kids, so it was our first time over and we were gigging. New York in particular we were overwhelmed by, driving up we saw the sky line and I felt like a kid going to Disneyland! San Francisco was the same, the weather was fantastic and it was a real gritty sort of place, I suppose just how you would picture it.

Pete: The shape of San Francisco was fantastic…

Gigslutz: And in the car feeling like you’re falling backwards because it’s so steep…

Gigslutz: Did you feel like there was more pressure to deliver because it was your first time over there?

Evan: I would say it was the opposite…

Pete: We were playing taster shows to see how it goes really.

Evan: It didn’t really come into conversation that we had to ‘step it up’; we just did what we always do. At the end of it, we do it for our own enjoyment and… very little else! 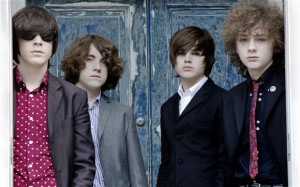 Gigslutz: Well it’s a good reason to be doing it! Your progression though the industry has been relatively quick, which is great, but has there ever been a point where it’s needed to slow down a bit?

Pete: Not really, it’s all happened in the moment, so you just get on with it and never stop and think.  I think it would be stupid to do that.

Evan: It looked like everything suddenly went mad and everything started happening, but it wasn’t like that at all. You don’t just jump up to a certain level, you work your way up so it didn’t feel fast…

Pete: It was passing through the ranks really.

Evan: Which we are still doing now! Still tiny in the grand scheme of things but happy!

Gigslutz: I’m sure you’re bigger than you think you are guys! Ross, probably one for you… Does it frustrate you when people constantly refer to your age?

Gigslutz: Well I suppose it’s one for everyone really…

Ross: It gets annoying after a while, up to a point… but it doesn’t matter what age you are, if you have the talent and are good at what you do, that’s the most important thing.

Evan: It doesn’t really make sense either… to make any sort of comment on it. The whole point about rock and roll bands are that they are usually teenagers and those in their early twenties and then it goes on from there. People write stupid things, they say that we have a ‘combined age of 12’ but Pete will be 18 in a matter of days…

Pete: It’s all irrelevant because apparently we’ve been 16 for two years now!

Gigslutz: What do you think of the new Blues bands that are coming through, like the 45s who you’ve just met? (The Strypes met The 45s backstage moments before this interview)

Josh: Yeah well that’s the first time we’ve met them and their really nice lads, it’s great to see people playing rock and roll music again. In general it’s great to see guitar music, like Jake Bugg who has become successful and opened a lot of doors for us. I think there has always been big guitar bands, but it is the fact that people like Jake, are playing primal Blues music now is amazing. The Black Keys are one of the biggest bands on the planet and they’re a blues band… Jack White, who also very well-known too. They are all Rhythm & Blues musicians, but it just seems to get over looked because of all the pop shit!

(With 5 minutes to go before they went on stage, the lads ran off to get ready, so we picked it up a few days later once they had played a blinding set in Manchester)

Gigslutz: When did you first listen to music, rather than just hear it?

Pete: It’s hard to pin point exactly when, we’ve always been around it.

Evan: We were always aware of music growing up, even new things about music… I suppose for me when I was around 6 or 7, I started to love songs.

Pete: Then when you reach 11 or 12 years old, you start to find bands that really identify with and really love. And those songs stay with you.

Gigslutz: A solid part of your set is the covers you play. Have the new ones (Rockaway Beach/ Louie Louie) always been around?

Josh: There tunes we’ve always known and loved I suppose. Rockaway Beach is one we did very early on…

Evan: It was one of the first songs we ever learnt actually!

Josh: … and then we just had a bit of a Ramones binge in the last couple of months, so we started playing it for the Cavan gigs and we just carried on.

Evan: They’re both great encore songs. You probably wouldn’t get away with putting it on the album, but great for at the end of the night when everyone is…

Evan: … having a good time! You could literally play anything and it would go down well. 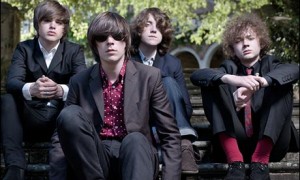 Gigslutz: You guys all seem to have so much confidence on stage, has it always been that way?

Ross: You get better over time.

Pete: The stage craft developed alongside playing live, it just got better as we went along. You come more proficient as a showman as you get experience gigging.

Evan: We never really had any problems doing gigs.

Pete: We never got nervous.

Gigslutz: Do you think having a stage presence is important then?

Evan: You have to put on a bit of a show because we hate it when people mope about on stage.

Ross: It’s such an annoying part of music.

Evan: When you go to see a band, I would like to think you’d want to see them enjoying themselves.

Gigslutz: Well you do all look as if you’re enjoying it! When you write a new song, do you have the intention that it should sound a certain way?

Josh: It goes through stages, starting from a very basic idea.

Evan: There are a couple of songs that started life in a completely different way to how they sound now. ‘Blue Collar Jane’ was very different in the beginning.

Josh: It was just a straight rock and roll tune that got faster. And then something like ‘Angel Eyes’ which was sort of a Skiffle beat.

Josh: Yeah, I’d written it as a skiffle tune and then we changed it around in the studio.

Evan: It wasn’t supposed to be on the album but it cropped up again, we didn’t have a slow song and we thought we needed one so it went nicely with it!

Gigslutz: Have you heard any new bands coming through at the moment that you would recommend people listening to?

Josh: A couple of Irish bands that we really like, one of them is called Raglans, who supported us in a few shows. Another called The Hot Sprockets, they’re from Dublin.

Evan: Raglans have their album coming out on the 20th of March actually…

Ross: The Turning who supported us tonight.

Josh: And The Shimmer Band who supported us earlier this week, they are fantastic too. They are a lot of guitar bands at the moment, which is great.

Gigslutz: Do you see yourselves always being in the industry? If not performing, then managing or producing?

Josh: You can’t really think too far ahead, we are just focusing on this and seeing how long it can last!

Evan: It’s the next avenue open if we want to stay in…

Ross: Depends where we are.

Pete: A lot people become despondent if they’re stay for too long.

Gigslutz: Would you judge yourselves as successful yet? Is there a point you would?

Pete: You imagine that there is, but not at this stage.

Evan: I don’t think there is actually any point in thinking you are, and it just feels like ‘oh yeah we do this’.

Josh: Success seems to be a bit of a side thing, it’s not a main focus.

Evan: If we’ve had any success, we have, materialistically, nothing to show for it!

Pete: There is nothing that marks your path, there is not one moment when you can say ‘oh we’ve made it’ you just go and see what your lot is like as a band.

Likes: Ponchos, cornflakes and Almost Famous. Dislikes: Egg with any red food, Leicester's seagull population and having no ID.

Likes: Ponchos, cornflakes and Almost Famous. Dislikes: Egg with any red food, Leicester's seagull population and having no ID.
View all posts by Rachel Young →