Join us for a brand new feature where we’ll be diving headfirst into the wider world of popular culture to uncover the very best in music-related cinema, art, literature and fashion.

For Duran Duran the visuals have always been almost as significant as the music. From Nagel’s iconic painting of Rio’s cherry ice-cream smile adorning their second album cover, to music videos with budgets usually reserved for the cinema; shot on location in Sri Lanka and Antigua and directed by future filmmakers. Even in more recent years the attention to detail has not been lost. The programme for 2005’s ‘Astronaut’ tour (featuring all five original members) included a pop-up stage and mini cut-outs of the band, while an upcoming vinyl release of 2012 live album ‘A Diamond In The Mind’ features diamond dust on the art work, as standard. Naturally.

Even with the humble poster, Duran Duran manage to create something stunning; an effort that hasn’t gone unnoticed by superfan and memorabilia collector Andrew Golub. Not merely a “Durany”, but Durandy. Named after an unreleased demo from the ‘Astronaut’ reunion sessions, ‘Beautiful Colors’ features posters of the band presented chronologically, from their first live dates in 1978 to their most recent tour for the Mark Ronson produced ‘All You Need Is Now’ LP. As well as these – documenting the band’s journey from arena filling pop-playboys to theatre shows and stadiums via various line-ups – previously unseen posters are also featured, as well as commentary from the artists and designers who played a part in creating them.

A foreword by founding member and artistic mastermind of the band Nick Rhodes (whose platinum hair and strict lack of denim only contribute to these visuals) gives the book the Duran seal of approval. Parts of Andrew’s vast collection have previously featured in the Rock & Roll Hall of Fame and Museum, as well as various TV spots, making this the perfect collection for fans who also appreciate the visuals, but may be a little old for a John Taylor print blu-tacked to the bedroom wall. 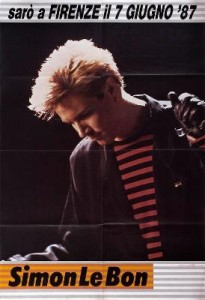