Birmingham rockers The Twang have recently returned with a great new album 10.20 and are about to embark on a joint headline tour with Cast. We caught up with lead singer Phil Etheridge to find out whats been going on in The Twang camp….

GS: Hi Phil, how are you doing?

GS: Are you all set to get out on the road with Cast? We’ve had it in the diary for ages and can’t wait for this one to come around…

PE: Yeah we’re all real excited about going out with Cast. They’re a great band with some classic tunes.

GS: So what is the set list looking like? Is it a mixture of the 3 albums, any surprises in there?

PE: Yeah the set list will mainly consist of tunes from the three records. We might throw a couple of b-sides in to the mix though. To keep the hardcore happy like!

GS: How does a joint headline tour work then? Do you just play alternate nights?

GS: So if you could pick any 2 bands to go and see doing a joint headline gig who would it be?

GS: That’s fair enough! The album cover was brilliant with the note from a neighbour. Was this a real note and if so are they now aware they have made it onto an album cover?!

PE: Yeah the note is real. The girl that left it had pinned it on the door one night so we took a photo of it. I’m not sure she knows we used it as the album cover. She still complains about the noise though. She’s ok… 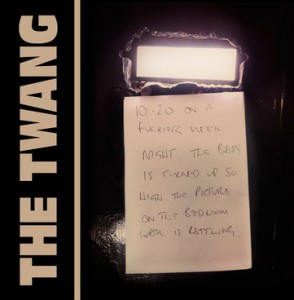 GS: There is quite a big scene developing in your neck of the woods with Swim Deep and Peace et al. Are you digging the new scene and are there similarities to when you were starting out alongside The Enemy and Ripcord etc…?

PE: I don’t think there are many similarities really. The bands breaking in Brum now do all know each other so it is genuinely a little scene. All those bands we got thrown in with we didn’t even like. It was the press trying to force a scene and we all know the best scenes, just happen.

GS: Is there any other new, or not so new bands about who you are excited about?

PE: We’re all looking forward to the new National record.

GS: What is the most ‘rock n roll’ experience of The Twang?

PE: Back in the day we were always playing up but the truth is when it’s happening everyone hates it and tells ya how “you’re gonna wreck your career” but then they go and talk about it for the next year “aint they nuts like!!”  There ‘s far too many tarquins in bands at the minute filling there wiskey bottles with tea.

GS: Agree there mate. So what is your guilty pleasure in your record collection?

GS: Nothing wrong with a bit Billy Joel every now and again. Ok, we have a radio show which we do would you like to pick 3 songs as a mini play list to be played on our show?

GS: Top choices. Have you ever had the ‘pleasure’ of listening to the German band with the same name as yours?!

PE: Yeah we met them in Germany as they were trying to sue us. They cover Robbie Williams in a folk style. Say no more

GS: Sounds fucking awful! So, what is next for The Twang. A new album in the pipeline maybe?

PE: Yeah we’re working on a new album as we speak. It’s sounding great. We’re also doing a few festivals in the summer so exciting times.

GS: Top stuff, looking forward to that. Before you go, anything else you would like to add?

GS: Never a truer word said. Thanks for your time

10.20 is out now via the usual out lets and you can catch The Twang, along with Cast in the following cities