The first MC in our LOTM6 Q&A takeover is Manchester’s very own Dorris. Hailing from Denton in the East side of Manchester, Dorris has been involved in numerous clashes over the last few years and has built himself a strong reputation as an MC who can certainly handle himself in a lyrical battle… 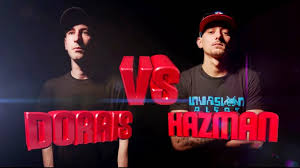 MT: You feature on one of the clashes on LOTM6. How was the whole experience of being part of the clash?

Dorris: Well it was a bit of a mad one really. I was in the studio one day just recording a tune and I looked at my phone and it was on meltdown, I’ve never seen so many tweets and I thought “my head cant even handle that right now” so I just put my phone down and carried on doing what I was doing. I was actually on the bus on the way home and someone rang me and was like “yo you need to jump on Twitter, Jammer wants your number” and then boom it just went from there; all pretty surreal really.

MT: Your clash was filmed in front of a live audience; it must’ve been quite surreal being in a live LOTM clash.

Dorris: There’s a few init but I always just go back to Crazy Titch vs Bruza for some reason. Its just got so much playback value for myself but obviously you’ve got Wiley vs Kano and Skepta vs Devilman which are legendary without even saying, but for me personally I love the Crazy Titch and Bruza one. After years I’ll still go back and watch that and buzz off it.

With his Dorris Vol 5: Redneck Behaviour mixtape out now and available to purchase via grime4life here, Dorris certainly has the attributes to go on and stamp his mark on the scene and judging by the quality of his LOTM clash with Hazman, his name will be heard a lot more in the coming months.

Follow @itsdorris to keep up with all the latest news from Dorris and watch this space as this Mancunian, like all of the MCs involved in LOTM6, is certainly an MC to watch.