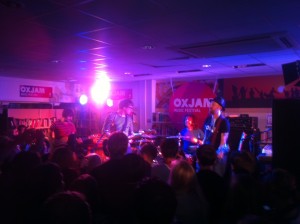 Oxjam has been up and running and gaining momentum since 2004. Now in its 8th year it has gone from a one off event, to having over 3000 gigs taking place and over 750,000 people attending. All the events are organised by volunteers who know and love their local music scene, and all money raised goes to Oxfam helping various causes around the world.

To launch the month of Oxjam gigs for 2012 Graham Coxon took to the stage in the intimate Dalston Oxfam store. He, and his other 5 band members somehow squeezed onto the stage after being introduced on stage by BBC6’s Shaun Keveney, who was in the spirit of things by dressing in some of Oxfam’s finest dresses and fur coats.

It was a bit if a treat to see Graham Coxon in such a small environment, with the capacity somewhere in the region of 100. This was some scale down from the 50,000 people in attendence the last time I saw him on stage, headlining with Blur at Hyde Park this summer.

Although not your usual gig venue, The Dalston Oxfam store is a nigh on a perfect setting to see Coxon. Apart from being quite strange trying to find a good vantage point in between the coat rails and DVD stands, the sound is immense and the low ceiling give it feel of a proper dingy club gig.

Much of the set comes from latest album ‘A & E’, arguably his best of his 8 solo offerings, with the highlights for me being ‘Running for Your Life’, ‘Oh Yeh Yeh’ and the Britpop esq ‘Meet Drink and Pollinate’. The set fluctuated between the short snappy punk numbers reminiscent of bands like Wire, to the more pop friendly numbers which were more reminiscent of Blur. It has to be said the latter ones were the ones received the best.

All in all a cracking kick off to the Oxjam gigs. Next up for us is Hot Chip on Thursday. If you see any of the events happening in your area, try go get to one and help support the cause.