Wales’ largest music festival, Green Man, has announced the third wave of acts playing at this year’s festival, returning to the epic surroundings of the Black Mountains deep in the heart of the Brecon Beacons for its 17th year, which sold out in record time this year once again.

Joining this year’s bill are the Ivor Novello winning band Villagers, returning to Green Man for the fourth time after slots in 2011, 2013 and 2015. Celebrating the release of last year’s The Art of Pretending to Swim, their fifth album in eight years, the band will bring their incredible live show to the Brecon Beacons and Green Man’s Mountain Stage once again.

Also announced today are These New Puritans who will play Green Man’s Thursday night, following the release of their critically acclaimed fourth album Inside the Rose earlier this year. For over ten years, These New Puritans (made up of brothers Jack and George Barnett) have successfully blurred the distinctions between pop, classical, electronic, rock and experimental music, earning rave reviews and praise from artists as diverse as Björk, Massive Attack and Elton John along the way.

Electronic duo Lamb are also announced today, taking to the stage with an extraordinary career spanning over two decades and a back catalogue of seven studio albums, plus a myriad of solo projects on the side. Following a 21st anniversary European tour in 2017, they return with the soaring release of their long-awaited seventh album, The Secret of Letting Go.

Also joining are Aidan Moffat & RM Hubbert, Glaswegian music royalty and veritable masters of storytelling, having collaborated once more to produce their critically-acclaimed album, Here Lies the Body. Both Moffat and Hubbert have forged tremendous and enduring careers, in solo pursuits and as frontmen of their respective bands, each with a Scottish Album of the Year in their arsenals. London-based indie-rock quartet, The Big Moon, are looking forward to a huge year ahead with a highly-anticipated second album in the works, following an astounding debut, Love in the 4th Dimension, which was nominated for a Mercury award.

Returning to the festival and ready to catapult the crowd into a frenzy are the percussive and chaotic Snapped Ankles, with new album Stunning Luxury to boot, birthed into the East London warehouse scene and moulded from a diverse array of influences. Chelou, also returns to subdue the masses with his ambient blues and electro-acoustic sound, armed with his new dreamlike LP, Out of Sight.

For the first-timers, Green Man welcomes Self Esteem, an artist who graces the stage with no compromises, no reducing herself and no hesitation, delighting the festival circuit with her provocative debut album Compliments Please after an unforgettable UK tour. LA-based pop enigma Johanna Samuels lands with her brilliant Have a Good One, an EP that solidifies her own space within Pop, and singer-songwriter Brigid Mae Power spell-binds with an intermeshing of genres and a stunning soundscape.

Also added to the bill are I.R.O.K, The Intergalactic Republic of Kongo, who promise to immerse and mesmerise with their psychedelic afro-futurist beats. Self-proclaimed Lo-Fi Sci-Fi Garage-Fuzz, Welsh multi-instrumentalist Eitha Da brings his debut album Voma to the valley, plus one of London’s most exciting newcomers, Meggie Brown, guarantees to turn heads with her insatiable new sound, kinetic performances and seven-piece band. Jerry, winners of this year’s Green Man Rising, will take to the Mountain Stage, with runners up Peaness, PVA, Rosehip Teahouse and Wych Elm also performing over the weekend. And last but not least, GM are thrilled to announce BBC Radio 1 and BBC Radio Cymru favorite, Huw Stephens, a two-time nominee for BBC Cymru’s Best On Screen Presenter and a legendary champion for new music. Callum Easter, Greg Wilson, Squirrel Flower, Say Sue Me, Pet Shimmers and Dutty Disco also join the line up.

This exciting and eclectic mix of artists are set to join the already announced acts, which include experimental electronic music genius Four Tet and the witty cynicism of singer-songwriter Father John Misty, the festival’s first two headliners. Sharon Van Etten returns with her powerful storytelling for the first time since 2014, with new music to offer from her atmospheric new album Remind Me Tomorrow. And cult US band Eels, the self-proclaimed ‘World’s Number One Entertainers’ are set to wow with a live selection of classics and new material. Following a ten year hiatus, the iconic Stereolab will play highlights from their ten critically acclaimed albums. Also added are the widely acclaimed and beloved Yo La Tengo, who likewise have a hugely diverse repertoire of material. Elsewhere, The Growlers will be bringing their trademark ‘Beach Goth’ sound to the festival.

Green Man are also delighted to welcome one of indie-rock’s biggest breakout bands of recent years, Car Seat Headrest, plus the five-times-Grammy nominated duo from Mali, Amadou & Mariam. Returning are the formidable White Fence, otherwise known as Tim Presley, and country-soul band Whitney for their third time in four years. Canadian indie-rock collective Broken Social Scene, Bristol punk-rock band IDLES and rebellious KOKOKO! make a visit to Green Man. As is producer extraordinaire, Bill Ryder-Jones and multi-instrumentalist Marika Hackman. Maribou State are set to hypnotise with their latest album, Kingdoms in Colour, and Texan band Khruangbin bring their bassy, experimental sound to the Black Mountains. Making GM debuts are Spanish DJ John Talabot, one of the most quietly influential and critically lauded electronic musicians of our time, and legendary DJ Shy FX with twenty years’ worth of seminal material. Green Man favourites Big Thief, Julia Jacklin and Aldous Harding can all be found in the Welsh mountains across the weekend. Also added to the bill are Ex:Re, The Liminanas, Hand Habits, Yak, The Beths, Jockstrap and more. See below for full list of additions.

Tickets for Green Man 2019 sold out this year in record time. Those looking for the full Green Man experience purchased the Settler’s Pass, which turns the festival into a week-long holiday, allowing early access to the site from Monday 12th August, and including workshops, music, discounts on local heritage sites, galleries, castles and more. 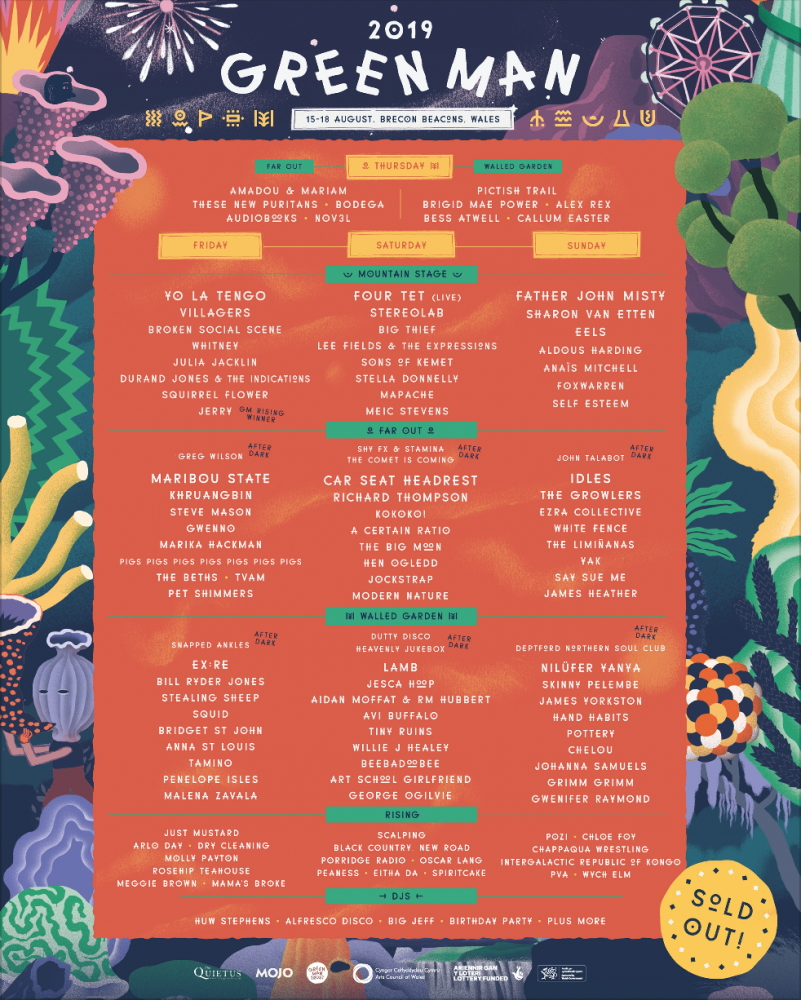 This Feeling Track of the Day: The Vitrines ‘Where I Stand’

This Feeling Track of the Day: Gauranga ‘Miles Apart’