Cult husband and wife duo The Handsome Family have announced who will be filling the support slots of their European and UK tour, which takes place over February and March next year.

The band – Rennie and Brett Sparks – take in 13 UK dates to promote their latest release, Unseen. As with previous albums, it’s alt-country which has seen rave reviews and will sound incredible in venues including London’s Union Chapel.

Joining The Handsome Family are three emerging artists who join the duo in celebrating Americana as a genre that deserves to be heard by the masses. Spanish songstress Joana Serrat, American singer-songwriter Courtney Marie Andrews and Cornish 3-piece William The Conquerer will alternate to open the Sparks’ show. Full information can be found below.

Tickets for the tour are available here. 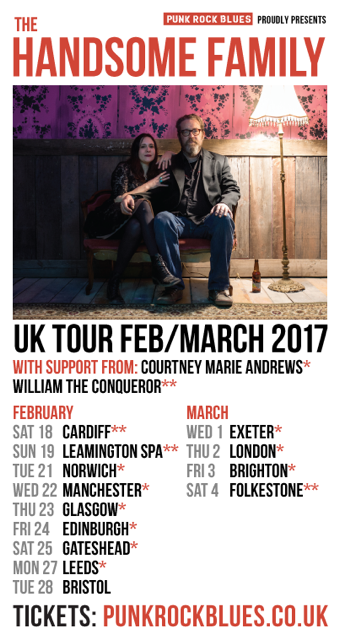 This Feeling Track of the Day : New York Tourists ‘Only For The Summer’