Returning for another year in the driving seat, Hit The North has announced it will take place in Newcastle across May 3-5 2019.  Heading up the bill is Jake Bugg and Tom Grennan.

The North East’s largest metropolitan music festival, Hit The North, has revealed it shall be taking over various Newcastle venues once again across the May 2019 bank holiday.  In its third year of festivities, the inner-city music celebration has already become a firm fixture in the festival season calendar.

This year’s festival has been billed by promoters as the “most diverse and ambitious lineup to date”.  With the likes of Elli Ingram, Ten Tonnes, Glasgow’s LUCIA, Slaves label mates, Lady Bird, Catherine McGrath and The Blinders all being announced in the first wave, we can only expect great things from next year’s outing.

While Hit The North’s ethos is to champion the latest acts to emerge from the North East, that does not mean they cannot treat music revellers to some stunning headliners.  The forthcoming third edition of the festival will be headlined by none-other-than Nottingham’s Jake Bugg and Tom Grennan.

The first headlining act to be announced for Hit The North 2019 is Jake Bugg – whom with four records and hundreds of festival performances under his belt – is sure to put on a scintillating performance as he closes the Tyneside festivities on Sunday, May 5.

Also fronting the weekender is man-of-the-moment, Tom Grennan.  A stunning debut album saw 2018 becoming the year of Grennan and, with numerous 2019 festival slots already in place, it seems like the steam train is only picking up more momentum. 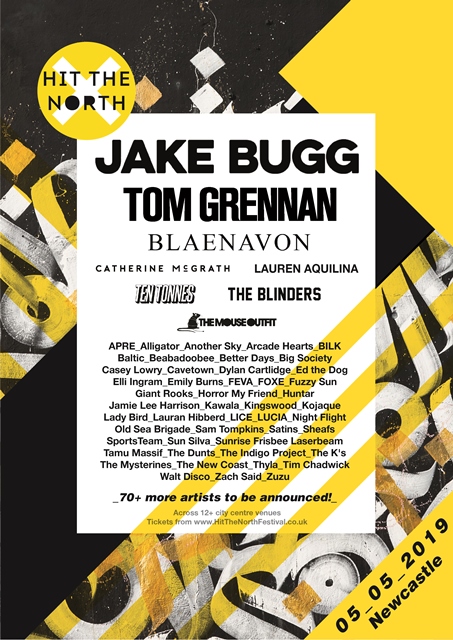 About the first wave announcement, Festival organiser, Steve Davis said “The last Hit the North was a huge success. It was great to see music fans running around the City Centre… and we’re delighted it will make a return in 2018.”

“We’ve got big hopes for this year’s gathering and we’re confident there’ll be something for all new music fans to get their teeth into. It’s going to be some festival and is not to be missed.”

Hit The North is already squaring up to be a stellar operation even before full weekend details are be announced.  Keep your eyes glued to Gigslutz for more information regarding Hit The North line-up announcements and venue confirmations.

Early Bird tickets for Hit the North 2019 have already sold out, however,r General Admission tickets are now available to buy.  Click the link to get your pass.