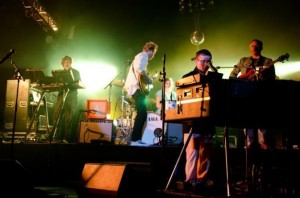 I think I’ve just got Hot Chip. Since they became mainstream with the 2006 album ‘The warning’ I always had them down as some sort of also rans without anything really to back it up. My notions were completely incorrect and they haven’t disappeared as I once predicted they would, and instead they’ve went from strength to strength as showing by their 2 night stand atBrixtonAcademy.

The warm up for the gig consisted of doing an impromptu pub crawl ofLondon. A quick pint in Hackney was interrupted to meet a mate atLondonBridgewhich led to a quick train journey to New Cross to sit in a beer garden in the rain and then taxi across the South East to the South West to plough on in Brixton.

Outside it was a truly awful night and the heady days of getting pissed inHeatonParkand on Hackney Marshes over the summer at festivals felt a long time ago. The dankness was forgotten about though as soon as Django Django came on stage.

I was looking forward to support act Django Django almost as much Hot Chip and they didn’t disappoint. The Mercury nominated Scottish 4 piece were ideal support for the evening and had the sold out crowd getting nicely into the groove. As previously mentioned my predictions are pretty shit, however I reckon DD are a good bet to headlining the Academy sooner rather than later.

Hot Chip come on to a great reception. It’s something of a homecoming gig for them, beingSouth Londonlads. They open with the bass heavy ‘Shake a Fist’ which morphs brilliantly into the sublime ‘Boy From School’. The atmosphere in the place was brilliant, which hit a plateau with their biggest hit ‘Over and Over’. A slight surprise in the set was the inclusion of ‘Gabrielle’, a solo number from Joe Goddard. A nice surprise non the less.

‘Ready for the Floor’ goes down a storm, as would be expected as does their brilliant version of Fleetwood Mac’s ‘Everywhere’, a brilliant anthem for those in the audience who are clearly in chemically altered states! ‘Hold On’ brings the set to an end before they return for a 4 song encore with the highlight being the brilliant ‘I feel better’.

No body in the audience wanted it to end but unfortunately it had to. A triumphant home coming gig and clearly a band at the top of their game. If I ever tell you band is not all that and won’t be around for long take no notice!

2. And I Was a Boy From School