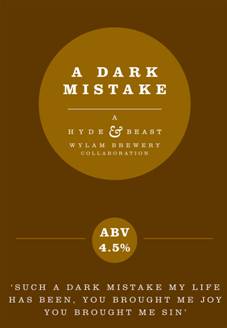 Only a few weeks after launching their first very own ale, the Sunderland band have confirmed they will be introducing a second beer, called A Dark Mistake.

Hyde & Beast’s drummer and producer, Neil Bassett, said: “Basically, we sold all the stock we had of our first ale, Train To Nowhere, on our last UK tour, so we thought we may as well make some more beer, so we have! Obviously the guys at Wylam Brewery did a lot of the hard work, but we had a big hand in the tasting process and are delighted with the results.

“We also had Train to Nowhere on draught in selected bars in Sunderland such as The Ivy House, The Dun Cow and The Museum Vaults and with the festive season approaching other pubs also got in touch, so we will be able to supply them with A Dark Mistake too.”

Train to Nowhere, was firstly promoted by Hyde & Beast when free 330ml bottles were handed out to Sunderland fans as they made their way to a football match at the Stadium of Light last month.

Matt Boyle, from Wylam Brewery, said: “Hyde & Beast just didn’t want to do the same brew again and as the title suggests, A Dark Mistake, is deeper in colour and more full bodied.

“Hyde & Beast considered this one first time around, so it’s nice to get it out there. We’re delighted with the way the beers have been received and A Dark Mistake will also be available on draught and in bottles in bars throughout the region.”

Keep your eyes peeled for this new ale in your local boozer over the next few months.

ALBUM REVIEW: Beans on Toast – ‘The Grand Scheme of Things’

LISTEN: Plump DJs – ‘You Belong To Us’