After a busy year of promoting the artists on their DIY label Cool Thing Records (Beckie Margaret, Suspects, BAIT), Southend’s Asylums are stepping back in to the spotlight this winter with news of a second album, and their first local live show in a year. The band will be returning to Chinnerys along with label mates Suspects to headline what’s set to be a knockout gig on 2nd December. We caught up with Luke, Jazz, Henry & Mike to discuss their anticipations for the gig, upcoming plans for 2018, and Celine Dion covers (?)…

Hello Asylums! You’re just wrapping up the mixing for your second album. How has the recording process been for you this time around?

Jazz: It’s been an amazing experience, everyone in the band has really stepped up on this album which really sped up the recording process. We rehearsed intensely for weeks leading up to recording, the songs flowed and immediately felt natural and familiar to us to play.

Luke: We’ve pushed ourselves musically to break new ground without losing our identity. It’s been a lot of late nights but extremely rewarding, most bands don’t get a second album these days sadly, so we feel extremely lucky.

Mike: For me it’s been yet another reminder of how well we gel as musicians and how driven Luke is as a songwriter and an artist. He’s a great team captain, someone to look to for inspiration within the process of creation.

You’ve released nine records by other acts this year via your Cool Thing Records label. Are you surprised by the positive responses you’ve had to each act?

Luke: I wouldn’t say we’ve been surprised as each artist/band we’ve worked with makes really cool and valid music, we’re just pleased we’re able to do a good job for them.

Jazz: It’s a pleasure and an honour to work with such talented individuals and have the opportunity to see their music grow. People are really discovering Cool Thing now and the response and support has been overwhelming for us.

Mike: We genuinely only release records that we feel have something to offer music fans. Each artist is unique to the other, offering fresh and diverse sounds to music and fans of our label 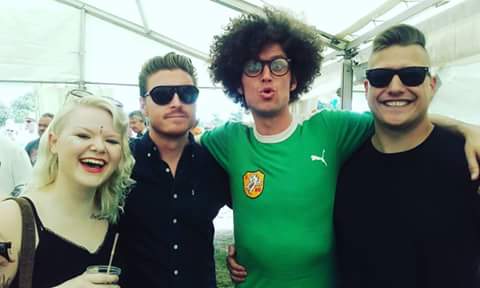 How did you find the time to write new Asylums material alongside all of this?

Luke: I think working on the label and band at the same time is symbiotic, what could be more inspiring than being surrounded by a bunch of awesome bands and artists that are free to do what they want? It fires you up and keeps you in that creative space every day.

I personally never try to write songs, I’m compelled to do it every day and I don’t know why. For some reason I had an epiphany after Reading Festival this year and demoed 15 songs in 2 weeks, artwork ideas, themes, lyrics, music all just hit me in one go……it was quite bizarre.

In addition to regular live work with Asylums this year, you’ve also played in BAIT and Beckie Margaret’s live bands, how was that?

Jazz: Playing in Beckie Margaret’s live band really taught me how to be more disciplined as a musician, the subtlety of her music requires such careful consideration of everyone else’s parts to work live. Me and Luke wanted to do justice to her recordings and try and make the experience of playing live a little less anxiety inducing… I’m not sure if we succeeded in that or made it worse!

Luke: It’s been wonderful to support Mike with BAIT and help him realise a wonderful musical vision, Beckie is quite simply an incredible singer and songwriter and it’s an honour to help. I recently contributed some backing vocals to the next Suspects single too which was fun. No one wants to eat pizza for dinner every night, some variety is good for you. Having said that, Jazz does eat a lot of Pizza.

Mike: It’s healthy to work and write with other musicians… 100% it helps inspire and create new ideas. I love being in the bass player role with Asylums just as much as I love being in the driver’s seat in BAIT.  It’s very easy to become complacent as a musician and I can see how playing with Beckie has helped Luke and Jazz consider their own styles which has had a positive impact on the second Asylums album. 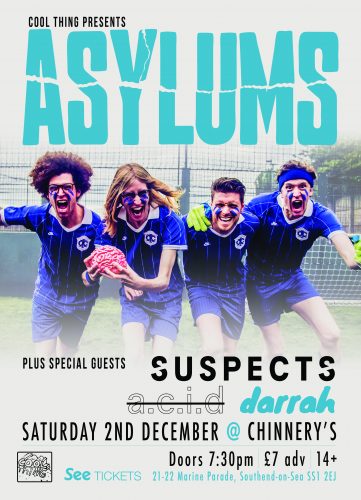 Why have you waited a year to play a hometown show?

Luke: We wanted to focus on supporting others in our community for a while, we didn’t want to over expose ourselves when there is so much great talent locally. We have a new record in the bag now so it feels right to step back into the ring.

Mike: The focus has been on creating a new record and building our label. We’re always moving forward… we have to! If the shark stops moving, it drowns.

In 2017 the Cool Thing label roster has grown significantly, can you describe the experience so far?

Luke: I stopped drinking and started meditating every day to keep on top of everything. It can be overwhelming some days but I know in my heart it’s helping everyone involved stay happy and creative, in our own small way I feel we are putting good energy out into the world. We all feel lucky to have a family of kindred spirits around us Kana, Jazz, Henry, Mike, Conor, Hayley, Danny, Jai, Steve, Mitch, Iron Brain and all the bands are such an inspiration.

What can people expect from the Chinnerys show on December 2nd?

Luke: Visceral rock action, three amazing support bands, and a hell of a lot of hair.

What are your band and label plans for 2018?

Luke: Music is far too unpredictable to make huge plans, we just stick to the broad strokes; Play good gigs and make good records, then try to reach people, try to give them something they don’t already have.

We are excited to put out another Asylums album as well as a series of records for other bands and artists in 2018. Kana also has his debut photography exhibition we are going to help him with.

Huge thanks to Asylums for lending us their time to answer some questions! Get your tickets for their show at Chinnerys here.

*Premiere* This Feeling Track of the Day : Sway ‘To Be A Man’