“From the moment that Sly heard the whole soundtrack, he loved it and thought that that was the way to go,” Bill Conti tells me, today a spry Academy Award winner of 74 who can look back on a body of work with no small amount of genuine pride.

Winning a best film score Oscar for The Right Stuff (1983) cemented his reputation in Hollywood as a master of the soundtrack – that rare ability to say with music what words cannot – but it is for his iconic work on Rocky (1976) that he is perhaps best known. Working with a small budget and a tight recording schedule, Conti nevertheless managed to conjure gold from the constrained circumstances.

“It was a very simple, almost predictable story,” he tells me, “but what was unpredictable is that Rocky didn’t win in the end. The film happened to have a big effect on an audience and has actually lasted in terms of being an underdog movie. And no one thought 40 years ago that it might do as well as it has done. It was an honest film in the sense that it was a good script with fine performances.”

The production was simple, he says. “John Avildsen (director) and Sly, and all of us who played a part in it, were surprised that it had such an impact on the public. There was no money, as such. There was a $25,000 package deal, which composers offered the project before me had turned down because there was no money to be made in terms of a creative fee. A package deal means you have to pay for the studio, the engineer, the tape and all expenses regarding the music, so in one three-hour recording session we did the entire score. We didn’t have projection because a film projectionist would have had to be paid, and in those days projecting a film when you did the recording meant that if you wanted to do another take because you made a mistake, you had to manually run the film back. But it worked out in the end.“

Improvising and bringing all his passion and know-how to the fore brought about something almost miraculous. “When the producers [Robert Chartoff and Irwin Winkler] saw that I had assembled 31 musicians, they asked why so many were being used and suggested I save some money, but I said that I couldn’t make the sound I wanted with any less. I had six trumpets, you see…“

Bill grew up listening to opera and the opulent orchestral soundtracks of sword-and-sandal epics like Ben-Hur. “In the 1950s and ’60s, the composers I grew up listening to, and who made the greatest impression on me, were Miklos Rozsa – and the soundtracks to his big brass-led Roman picture scores – and Lalo Schifrin who was an excellent composer. So I always wanted to write the big loud stuff,” he laughs.

Would he say the Rocky score is Italian-American in concept and sound? “Definitely. For example, I grew up listening to opera and knew Cavalleria Rusticana [by Pietro Mascagni] before I was six years old. The end piece of Rocky, over the credits, is a fugue for strings alone, and if in a way it makes it more classic sounding, it’s intentional because in the beginning when John Avildsen had begun shooting the film, he invited me up to his house to watch the dailies, and he would be playing Beethoven. He told me he saw Rocky’s story as a classic fairytale. To which I added ‘What about the streets of Philadelphia? Suppose I try to combine the two?’ In other words, to keep in mind that you want this to be a classic story, but with the added life of the Philadelphia streets. The classical feel was totally intentional.“

The classical take on film scores that Kubrick and Scorsese have used – Strauss for 2001: A Space Odyssey and Mascagni for Raging Bull – must also have had an effect on his approach. “Yes, and like Raging Bull, Rocky’s really tragic in the best operatic sense. When people see a movie like that and they’re into it, it really makes the film hang around for a long while. Everything was either the first or second take. The session went by so fast.” And the score was fully prepared? “Of course, the score was fully written and everyone was called. We rehearsed it once and did a take if it was good, then did another one. So in three hours it was all over, and I didn’t have a feeling as to how good it was. The only feeling I had was that I had managed to record all the music in time.

“At the time, my wife was working as a secretary and I had called her and asked ‘Does anyone in the office sing?’ She said yes, so I asked her to bring them over to the studio on their lunch break for the soundtrack. So those voices you hear on the original album were women who worked with my wife in her office. My wife had said that she thought they could sing pretty well. It came about like that because no one had the time or money to look around for anyone else. So they came and they sang and that was it. It cost nothing.” And what a result, the intensity of the female voices on ‘Gonna Fly Now’ making that segment the most memorable with the live band of legendary session players Johnny Guerin (drums), Max Bennett (bass), Dennis Budimir (guitar) and Mike Melvoin (piano) helping to create the timeless, rousing sound.

Carl Weathers, who played Apollo Creed in the film, told me recently that “Bill Conti wrote one of the most recognisable film scores with many songs from the soundtrack helping make Rocky the hit it became. No one could have done better.“

Which is impossible to disagree with. The film’s future impact was discernible very early on, and Bill tells a story to illustrate. “At the very first screening which began at 7pm – it’s called the cast and crew screening – we hadn’t finished the dubbing, or mixing. The producer, the director, Sly and myself were mixing the last reels so we were not there at the beginning because we wanted to finish reel 12 and then get back to the screening. When we finished, we went back into the screening room which was showing the movie in progress during the ninth reel. We were at the back of the theatre and we sat down. We don’t have the vibe of the room at this point. We’re just sitting there. So then up comes the tenth reel which is the training montage, and when that finished, the entire audience jumped up and was going crazy. And the only people in the house that were seated were us.“

It was a reaction that has continued to play out nationally and globally over the ensuing 40 years. “We did not know that that was going to happen,” says Bill, amused by all the memories. “It would have been total hubris and arrogance to have said that we were expecting the success. But then, hey,” he adds, “we were very lucky…“

The Greatest Boxing Ringwalk Songs (2CD) album is available in the shops on 25th Nov or you can buy now direct from Split Records on www.greatestboxingringwalksongs.com 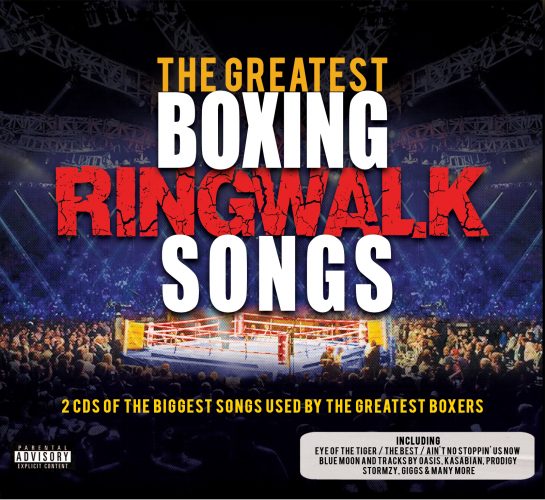 This Feeling Track of the Day : Matinee ‘Satellite’