Ahead of his second appearance at the Shiiine On Weekender with his band The Wedding Present, Kevin Quinn caught up with David Gedge to find out what they have in store…

Thirty years since George Best’s release, what are you memories of that time (personally and within the music alternative scene)?

It was an exhilarating time for us… for obvious reasons! I’d been planning to be in band since I was about five years old and now I was finally writing songs, making records and playing concerts for a living! The alternative music scene was at an exciting point, too. It was just after the NME’s C86 release and there were lots of new bands and labels and people putting on gigs and making fanzines…

What are you memories of the photoshoot with George Best?

I recently wrote about that for an issue of ‘Tales From The Wedding Present’ my autobiography in comic book form. To be honest, I was basically just awestruck. He’d been one of my idols when I was growing up in Manchester. Which was why I’d named he album after him, of course. In my nervousness I offered him a can of beer, completely forgetting that he was a recovering alcoholic. 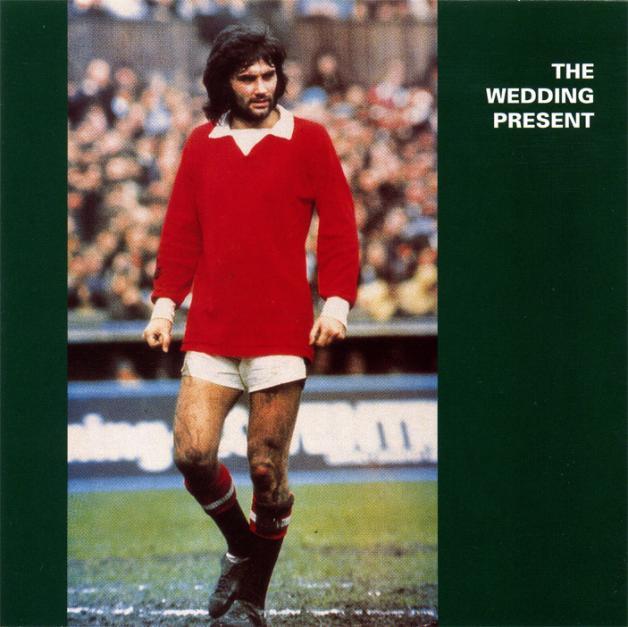 Who were your primary influences when forming the band? Music, literary, filmic?

I’ve always been fascinated by pop culture in general so there’s far too many to list but, musically, at least, let’s say that the stuff John Peel was playing was obviously significant. I think most pop lyrics are rubbish, which is why I think mine tend to sound more like film dialogue. But I’ve also always liked the conversational style of Lou Reed’s words in The Velvet Underground.

George Best 30: You’ve not re-recorded it, or reduxed it, but, simply recreated it, as you were unhappy with the end product. What can we expect from it?

It wasn’t because I was unhappy with the original. It’s true that I think we have made better albums since but we wouldn’t’ve released it at the time if we hadn’t’ve been happy. George Best 30 simply came about because we had the time and the opportunity and the line-up at that point was playing it really well. They were adding something extra while still respecting the original. The fact that Steve Albini was in place to record it didn’t do it any harm, either!

This is your second time at the Shiiine On Weekender, what do you like so much about it that brought you back?

In a word… the atmosphere. There’s something special about people gathering to celebrate a genre and culture which means so much to us all. Everyone’s always very friendly and receptive.

What can we expect this year?

Well, we’re playing George Best live… simple as that! People always ask me why, if George Best is my least favourite Wedding Present album, I’m happy to perform it. The answer is that, as a live set, the energy is incredible! It’s a full on charge of fierce guitarring and frantic drumming… I love playing it.

Anyone you’re looking forward to seeing?

Definitely Peter Hook. I saw him playing in Los Angeles a couple of years ago and I was in tears, it was so moving. Such a great sound. 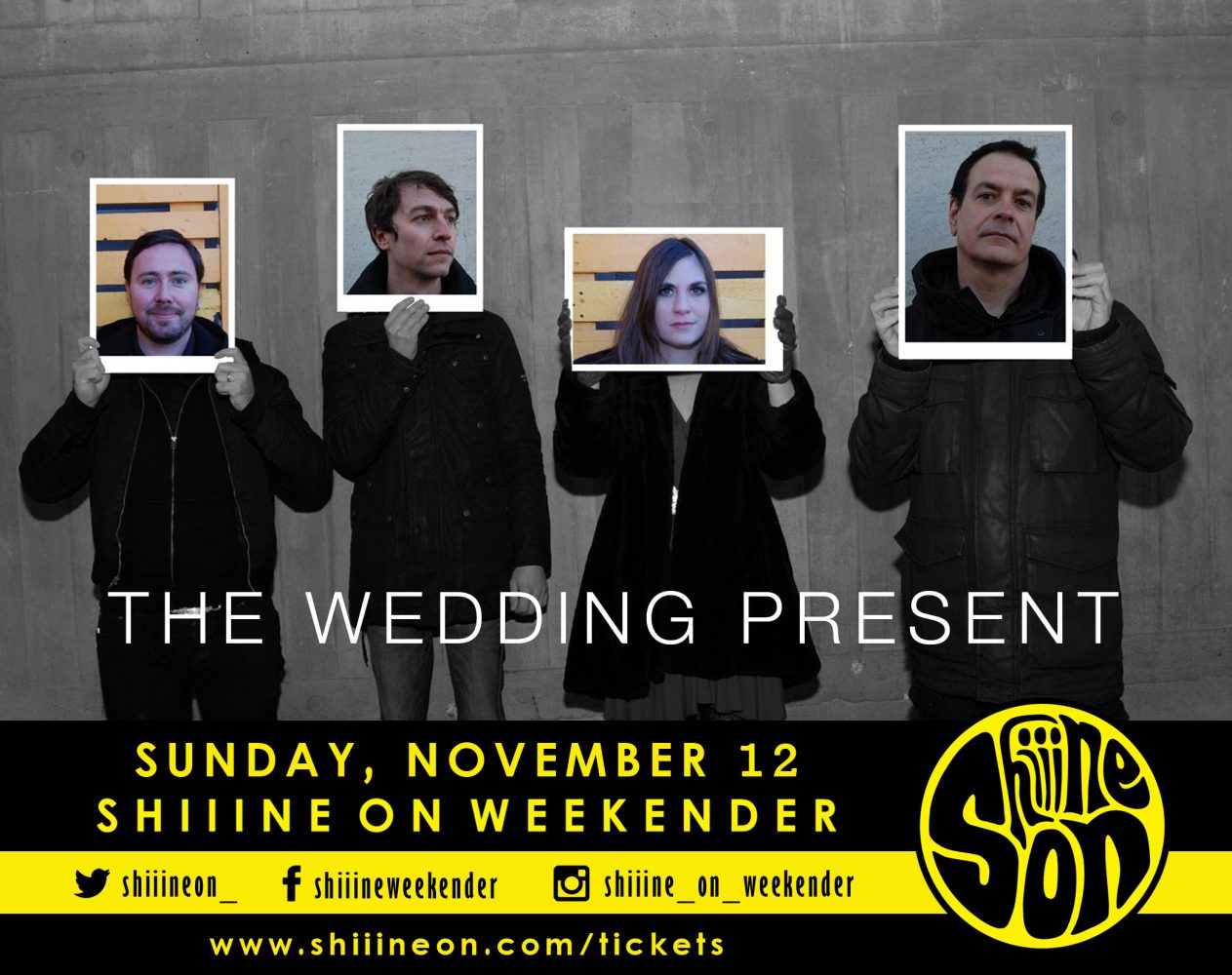 How do you feel about the demise of the music press? How integral were they to your starting out and staying ‘in’?

It’s obviously kind of frustrating that there’s no longer a specific home for informed music writing but, if I’m honest, I’m glad to see the back of how some bands were criticised because they didn’t fit in with editorial policy or just because the writers thought by attacking them readers would think they were being hilarious. The Melody Maker use to slag off The Wedding Present all the time but they’d still put us on the cover to sell their papers.

You are immortalised on the New Musical Express’ cassette C86, the holy grail of alt-indie artefacts. Amelia Fletcher (Tallulah Gosh) has said that ‘The C86-ness is in the personal politics of it’; something your entire output addresses. Is there a dearth of the personal-political/political-personal in today’s ‘outsiders’?

I’m certain there’s a new generation of young people who’s writing is comparable but maybe it just doesn’t sell as well as other styles? With the lack of money going around for musicians these days I can understand if people need to write stuff that sounds like it’s made for a car advert.

The term ‘C86’ has become lazy shorthand for a style, a sound, a rootless label to (re)sell. Agree?

I suppose so… but if you listen to the original collection, there isn’t actually one unifying style or sound on there… I actually think that’s one of its strengths. It’s come to mean jangly guitar pop but some of the bands on it were anything but that!

How would you summarise today’s ‘indie’ darlings? Who are they for a start?

No idea! Alt-J maybe? I know ‘Rock ‘N’ Roll’ is obviously cyclical to a certain extent… but whenever I hear a new group these days they always remind me of a 60s band or 70s disco or 80s new wave or something… the only real innovation these days seems to be in the way music that is distributed and marketed.

Who (if anyone) is the modern-day George Best?

I don’t think there is one; he was a one-off! What was so appealing about him was that unique combination of style, recklessness, charm and sheer talent.

Do you get mistaken for Corrie’s Underworld kingpin Johnny Connor much?

Sorry, I’ve no idea who that is! After decades of being something of a Corrie obsessive… my mum used to tape every episode for me… I’m afraid I haven’t seen it now for many years!

Last time out you said you liked the cut of Louis Van Gaal’s jib and you were quietly excited. What’s your summary of that episode and your assessment on motormouth and all-round braggart Mourinho?

Ha, ha… I think he’s hilarious. I think Football’s the richer for characters like him. Anyway, you can’t argue with Manchester United’s results since he arrived.

Finally, what’s ahead for The Wedding Present?

Since the most recent album, Going, Going… came out we’ve hardly had time to catch our breath, never mind think about the future. It was very well received and led to tours of Europe, North America, Australasia and, next year, Asia. On the George Best side… we released George Best 30, as you say… but also Live 2007 which is an album and DVD of The Wedding Present playing George Best live in Dublin. On top of all that I’ve been helping with the new Wedding Present ‘fanthology’ Sometimes These Words Just Don’t Have To Be Said which was recently published… and a documentary film about the making of George Best called Something Left Behind which is in production. And I’m already booking bands for the tenth anniversary edition of my own mini-festival in Brighton every August… At The Edge Of The Sea!

The Wedding Present play Shiiine On Weekender in November, tickets are available HERE 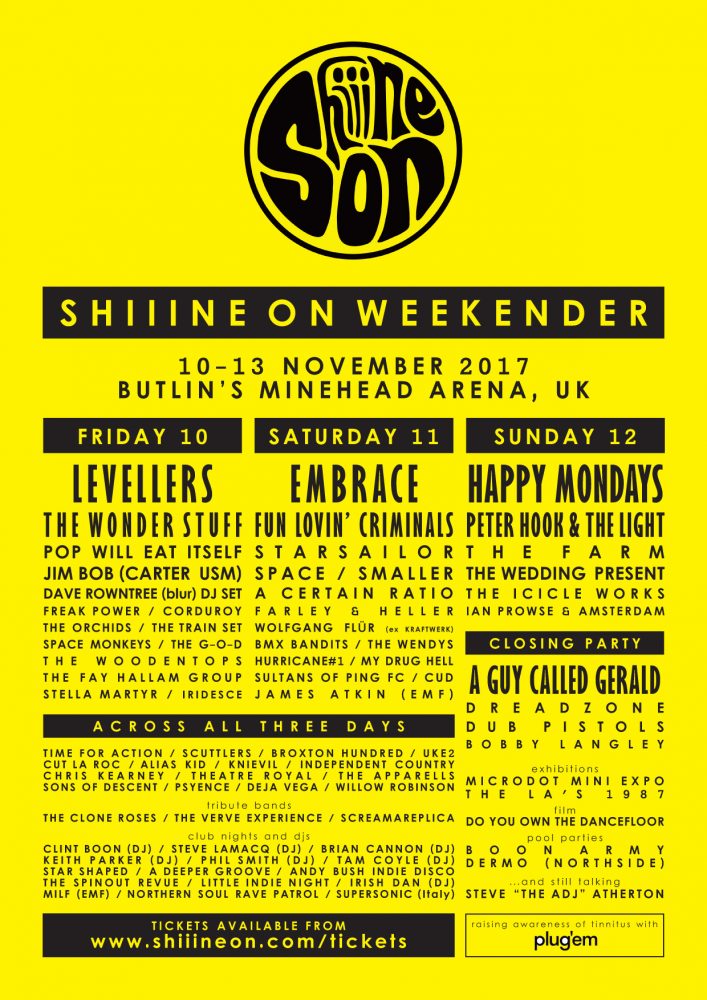