Meet the teenage girls who are fighting against sexual harassment at live music events across the UK. Yep, you read that correctly. Five, bloody brilliant, intelligent and all round inspiring teenage girls are standing up and shouting about something that has been an issues to all music fans for, well basically forever. Reports of groping at gigs shouldn’t be something we hear of very often, however, it seems through the ever increasing platforms of social media, bands are starting to hear about their fans awful experiences at these events. Earlier this year Drenge responded to a tweet from a gig-goer that stated  “vile creepy boys who felt it was within their right to grab and grope the girls around them just because it was crowded.” Their response?  “Hey douchebags. This makes me want to stop playing gigs,”

Rightly so, Drenge aren’t the only band voicing their support to this unacceptable behaviour that is happening at their live shows. Bands Slaves and Foals, amongst others, have both put messages on social media discouraging the individuals, and voicing their outrage.  In September, Peace frontman Harry Koisser also tweeted a fan’s experiences of being groped at one of the band’s shows. “If this happens at a Peace show tell me or security asap. If you think this is OK then, please, I beg you do not come,” he wrote.

Enter GIRLS AGAINST.  After sharing their stories of experiences, they realised that it was probably about time that somebody started saying ‘enough is enough’. Since starting Girls Against, the group have gained the support of a number of bands and as well as nearly 9,000 Twitter followers. The support that the group is receiving showcases how the issue of groping at gigs is rife, and the girls are determined in their cause of fighting it. Despite the feminine name they operate under, Girls Against aren’t solely focused on sexual harassment towards women either. On their Tumblr, they say they support “all victims” regardless of gender, including trans people or those that identify as gender fluid, and on twitter they state they’re ‘Five intersectional feminists fighting against sexual assault at gigs – here for all genders”

We managed to have a chat with Hannah, who just so happens to be the fan that caught the attention of Peace, from Girls Against, to talk about the campaign, how we can all be helping out and if you experience sexual harassment at a gig, the steps you can take with the help of  their supportive hands (oh and fave band too-of course!).

Hi Girls Against; can you give us a quick overview of who you are and what you’re shouting about (for those who may not know!)?

We’re Girls Against, we’re a campaign run by 5 teenage girls called Hannah, Anna, Anni, Ava and Bea (15-17). We campaign against sexual harassment and assault at gigs and other music events. 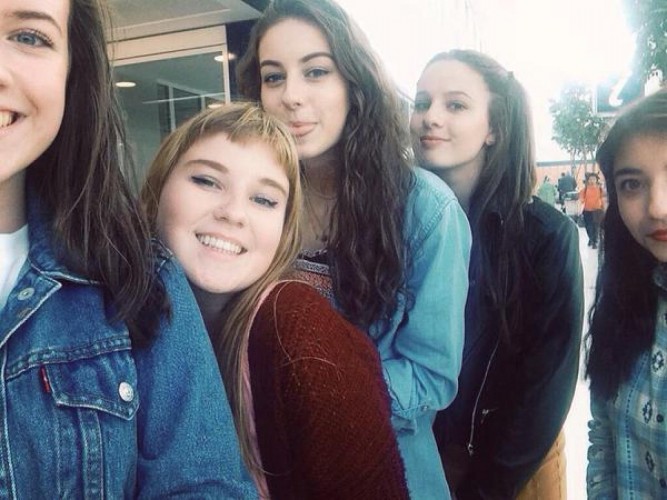 What was the implementing moment for you girls to finally think ‘somebody should be talking about this’?

We created the campaign after my experience of sexual harassment at a Peace gig in Glasgow, September 2015. Members of Peace shared the story and begged that fans do not attend their gigs if they will engage in that sort of behaviour. Many others then began to share their experiences, forcing us to acknowledge how widespread the problem is – hence leaving us compelled to do something about it. I found that confiding in a stranger gave me the courage to speak more openly about her experience so we created Girls Against to give other victims a safe space to speak out and aid their recovery.

If somebody feels like they have their own personal experience with sexual harassment at a gig, what steps would you encourage them to take?

If it’s after the event has happened then I would suggest whatever you feel comfortable with. Every event and person is different so there’ll be things some people are willing to do and other people won’t etc. So, if you feel comfortable then get in touch with the venue and band. They may have CCTV and be able to find the perpetrator and punish them accordingly. If you don’t then get in contact with us! One of our main goals is to provide a safe platform for people to discuss what has happened to them with someone they don’t know and who will never judge them. For me it was easier to speak to someone who I didn’t know at first. If you don’t feel comfortable talking to us then I urge you to talk to the people you trust. These are the people who love and care about you so they would never want you to be in any pain.

Bands like Slaves, Peace and Wolf Alice have already declared their support with your campaign-is there any other names you would love to see getting involved?

Hmmm, if possible we would love to have every band involved! However, there are a few key ones. We’d love to expand into different genres now as we’ve begun with indie and alternative but it happens at every show so pop punk and rock bands are the next people we’d really love to see support from. We’d also like to expand out into festivals as well because it can be really bad there.

You’ve been gaging a load of really exiting press and attention across social platforms, have you received any inevitable backlash from this?

Yeah of course we have. A couple of the comments sections on the articles about us on NME and the BBC for example have had some really weird shit on them. Loads of people have been saying that we’ve made the issue up, or it’s just part of the experience. They’ve also victim blamed me personally which wasn’t appreciated. We just kind of brush it off and laugh at it to be honest. You can’t start to take these things too seriously or you’d just fall apart. At the end of the day, we’re the teenagers helping to change the society we live in so.

Who’s on your current playlist at the moment? Are their any bands you’re really looking forward to seeing on upcoming tours?

While I’m writing this I’m actually listening to Blood Orange who is pretty cool. I’ve been listening to a lot of Charli XCX recently after seeing her documentary on feminism in the music industry, Sundara Karma and Gengahr are the current faves as well. I’m also trying to create an ‘indie Christmas’ playlist which is proving quite difficult. I’m SO EXCITED to see Wolf Alice again in March next year. 4/5 of us went to see them in September and they were so good so we’re all really excited to see them again.

Finally, how can WE get involved?!

By showing your support! Keep an eye out on our twitter and other social media for updates on what gigs we’re going to and where you can get our merch. We should also have a merch shop available soon so keep an eye out. If you know any aspiring journalists we’re always taking submissions for our blog or on other feminist issues – we have a great platform so we want to use it to the best of our ability!

Ones To Watch: Petrol Girls

One To Watch: Dead Boy Robotics