Upon first hearing The Lovely Eggs you will be hooked; their raw punk rock sound mixed with sometimes strange, sometimes haunting, and often hilarious lyrics, is incredibly addictive. They are a married duo from Lancaster, England consisting of Holly Ross (Singer and Guitarist) and David Blackwell (Drums) and have been regularly touring and releasing albums since 2006. They have a strict D.I.Y indie ethic, recording, producing and releasing all of their own music. Including their latest and brilliant new single ‘Goofin’ Around (in Lancashire)’ pressed on a limited fried egg vinyl (yes, it’s as awesome as it sounds) and hand packaged by the band themselves.

Since they were incredibly busy touring around the U.K, we harnessed the magic of the internet and were lucky enough to step into the wonderful world of The Lovely Eggs via email.

You are both from Lancaster, but I read that you guys played your first gig in New York.  How did that come about and how often do you go back to tour the US?

When we started the band, we wanted to travel. And we wanted none of the “local band” bullshit that you can get labelled with when you live in a small town. When we started, we wanted to defy all the conventions of the “music industry”. Part of that is starting off playing loads of gigs in your home town. We thought “fuck that let’s play New York”. It was a long time ago, so we’re not sure how it happened. We think we just emailed the venues, and they said yes. We played our first ever gig with the band White Hills at a dive bar called the Lit Lounge. Musically we were very different but something just clicked with us, and we are still friends with them today. Their music is amazing, and we are still big fans. We’ve not been back to America for a few years now. We had a baby, so it kind of put international touring on hold but we’ve done loads of gigs now with our baby around the UK, so we think it’s time to get back over!

A lot of your lyrics have a great sense of wit and humour, is that unintentional, or do you naturally gravitate towards the funny and ridiculous side of life for inspiration?

We think life is pretty ridiculous so it’s just a reflection of that really. We don’t regard ourselves as intentionally comedic it’s just that life can be pretty fucking funny sometimes! You have to see it like that, otherwise you will commit suicide.

Your music videos are amazing. How do you come up with the concepts for them, and have you ever had a great idea for a music video first that then turned it into a song?

No, we’ve never made a video into a song. We don’t know how we come up with them to be honest. The earlier ones we used to make ourselves with our friend Darren Andrews and the newer ones we have done with our pal Casey Raymond, who is a proper music video director. We’ve still no idea how we make them. We just drink wine and have a think. Then they are born and we are left behind screaming like motherfuckers.

Humour is only one aspect of your band but because your lyrics and videos are so genuinely funny, you have often been called a “comedy” band. How much does that label annoy you?

We don’t see ourselves as a comedy band. We just think often life is so ridiculous you have to laugh at the insanity of it! We don’t give a fuck what people label us; we’ve been called everything. But we do think that people who see us a comedy band don’t really “get” us. They can only understand it on a superficial level. People who get us know what we are on about . 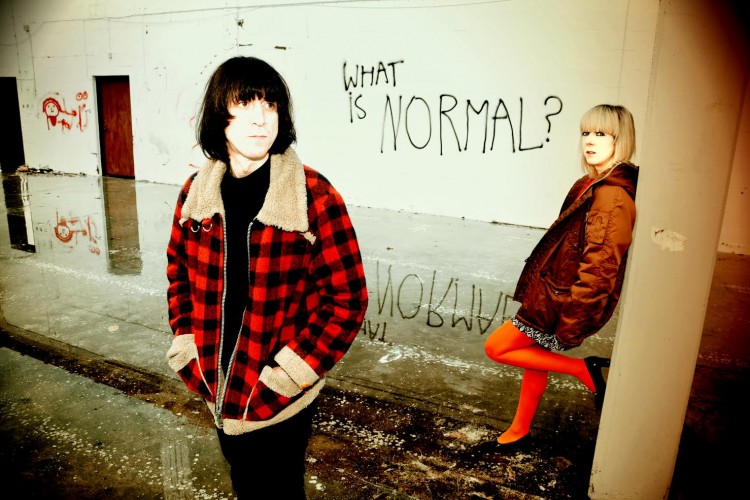 The Lovely Eggs are always touring, do you enjoy being on the road? And does the fact that you are both married, make it a lot easier?

Yes, we love touring and yeah being married does make it easier. It just means we get to travel and party and meet friends and make new ones together, which most couples don’t get to do. We take our little two and a half-year-old boy with us as well now. Its total fucking chaos, us two, our boy, our soundman and babysitter all packed in a Fiat Scudo tearing around the country. Yeah playing live is the best bit! Fucking brilliant!

What can someone seeing you live for the first time expect when coming to a show?

A P.A.R.T.Y! God, we have no idea. It’s usually loud and everyone is pissed.

There is a video on Youtube of you guys playing live at The Public in West Brom. Right before the end of “Have You Ever Heard A Digital Accordion?” an over excited fan jumped on stage and tried joining in a little too much (at one point he knocked over the drum kit) Does that sort of thing often happen at your live shows? And do you welcome that slightly chaotic punk energy?

That wasn’t an over excited fan, that was Jasper from Art Brut! And yeah we welcome as much chaos as humanly possible!

A great thing about The Lovely Eggs and something that appeals to your fans is that you are one of the few Indie bands in both sound and ethos; you are the epitome of the D.I.Y way of doing things. Was this a decision you made together and one you’d like to stick to, or would you love for there to be a major label contract looming on the horizon?

D.I.Y culture is very important to us. It’s that ethos of getting off your arse and doing stuff.  We record and release all our own stuff. But we have done stuff with other labels before like Cherryade and Too Pure, so we’re not against working with labels but it’s very important to us to have ultimate control over the look and sound of our records. What D.I.Y gives us is freedom and that’s what we value most over everything.

I checked on your website and 80% of your merch is sold out, is this one of the side effects of being super D.I.Y and you can only hand number and glue so many records?  Or do you sell a limited amount of merch at a time because you just don’t expect it to sell out? Also are there any reissues on the cards?

Partly yes it’s cos we don’t make enough and partly is cos it sells well. A lot of stuff we don’t re-press or re-do cos either we want to make it Ltd edition or we just want to move on and do something else.

Do you have a 5-year plan and goals or targets to reach? Or do you sort of see what happens and take it album by album, tour by tour? I guess what I am saying is, what does the future hold for The Lovely Eggs, and what can fans expect?

Are you bloody joking. We take every chaotic day as it comes! No idea what’s in store! Welcome to our world!!