Next up is (Sigue Sigue Sputnik’s 1986 Top 3 hit) ‘Love Missile F1-11’ on 7″ red vinyl – a special limited edition for Record Store Day on April 18th followed by the 12″ vinyl edition of the album (Flaunt It) in May – on very heavy black vinyl. We’ll also be warming up the audience at a couple of select dates on the “Marc Almond – The Velvet Trail Tour”. I played guitar on Marc’s album of the same name and will also be in his touring band.

Sputnik – criminally misunderstood then and now, do you feel vindicated now the whole ‘sphere’ is what you foretold?
Sputnik – criminally misunderstood? Well, we had our moments of glory – moments when we were celebrated and felt like contenders but maybe we were just too out of step with the fickle zeitgeist of pop in the ’80s to fit in. We sure didn’t have anything in common with most of our contemporaries. We took our inspiration and ambition from Sci-Fi, film, comics, pulp fiction, John Waters, Little Richard, Eddie Cochran, Elvis – mavericks all. I don’t know that we foretold the future – more tapped in to what we read or saw in the ambitious, futuristic movies of the day.

We had no interest in the reality and misery of daily office work or outmoded political ideas. We wanted to embrace the technology of the future and be friends with it. The world we live in today does look more like I imagined, like Blade Runner than dreary ’80s Britain. I don’t feel vindicated though – it’s just life. I didn’t feel misunderstood when David Bowie covered “Love Missile F1-11” either. Just a warm glow knowing he was still a kindred spirit.

What was it like working with Giorgio Moroder?
We told EMI we’d only make a record if they got Prince or Bowie to produce it. Why fuck about with mediocrity? Our A&R manager Dave Ambrose was a bit of a visionary and suggested Giorgio Moroder. We were intrigued – and a bit intimidated. Although we hadn’t really paid much attention Giorgio’s recent “pop” records with Limahl or Phil Oakey we all loved his “Scarface” soundtrack, Midnight Express soundtrack and of course his Donna Summer records. The whole working experience was great! He had a fantastic team – engineer and programmer were both first class. It was such an easy experience. Giorgio worked really fast – really sure of his choices.  He had vision, great ears, loads of ideas and believed in us!

I learnt lessons in those, my first proper studio sessions, that I’ve never forgotten. Start early – work fast – quit in time for dinner and have a real life. We cut the singles in London and the rest in LA. LA was amazing! Donna Summer was around daily, very chatty, very friendly. Don Simpson and Jerry Bruckheimer were in and out as Giorgio was doing the soundtrack to Top Gun at the same time as our album. I was present at the very first playback of Berlin’s ‘Take My Breath Away’ with Terri Nunn and her mum – a tune that sounded VERY much like my guitar lick from ‘Sex Bomb Boogie’! We partied at Giorgio’s house with Sparks. We were invited to the Warner’s lot by John Hughes so he could show us the scene in Ferris Bueller’s Day Off where he wanted to use our music. All very head turning stuff for a boy from rural Kent!

Working with Stock, Aitken and Waterman was another example of cocking a snook at the ‘biz’. What are your memories of that?
I have to say I was very dubious about this from the get go. Tony was very into it so we gave it a go.  I HATED everything about the experience. I couldn’t stand them or their hideous 80s “dance” music. They totally ruined our song ‘Success’. We wanted Donna Summer meets T-Rex not a fucking watered down Bananarama track. I remember at one time saying the only possible solution was to sneak down to PWL and burn the place to the ground – and torch their fucking Ferraris. We would have done you all a favour.  We’d only have done a few years inside and then we’d free – and celebrated to this very day!

Who first inspired you to learn guitar?
Marc Bolan, Mick Ronson, Paul Kossoff, Jimmy Page – they all soared! They played with no apparent effort and created sounds that thrilled the soul – melodic, passionate, raw and exciting.

Aesthetically when you see ‘provocateurs’ like Gaga/Cyrus dressing up do you think ‘Hmmm, passè?
No, I love Gaga! It’s impossible to hate her isn’t it? She’s bonkers but in a good way. She seems kind to her fans, loyal to her friends – and celebrates a world where all are equal. And does it all in 17″ stilettos or meat dresses. Go girl! Miley is great as well. Why not break away from your country roots and shake folks up?  Her twerking – It’s just a dance isn’t it? People were shocked by The Charleston back in the day.

Who are/have you been listening to/watching recently?
I’m biased maybe but I have to say The Velvet Trail by Marc Almond and produced by Chris Braide is absolutely great! There’s a new group called Palace that I really like. From recent years Ex Maniac by Baby Bird was astounding. We’re a bit behind on TV but have seen every Breaking Bad, just finished Homeland Series 2, watched Nurse Betty, seen all the big recent movies. You know. We try to keep up. There’s so much good stuff out there it’s hard to sift through it all.

‘SSS, by blending, disassembling and reassembling numerous conventions and styles were the first post-modern pop group’ Discuss…
Hmmm… Nice idea but isn’t that what everyone does/has done? The Beatles did it with the tools and ideas of their day. We had giants with giant shoulder pads to stand on.

How did you maintain ‘that quiff’?
A LOT of hairspray. Studio Line by L’Oreal…  They never did send me the free case even after the ad on our album.

Can you envisage Sputnik reforming? A chance to (re)create chaos and confusion 30 years on…
We did give it go at the turn of the century but it wasn’t really happening.  Tony James and I still get on but we don’t see ‘the others’. It was a group that celebrated youth as much as anything and it’s impossible to recreate the feeling. I have The ‘fabulous’ Montecristos now anyway.  A thrilling 21st century Rock ‘n’ Roll experience. We’ve even reworked a couple of Sputnik songs into the set – re-imagined for the 21st Century. There’s no looking back! 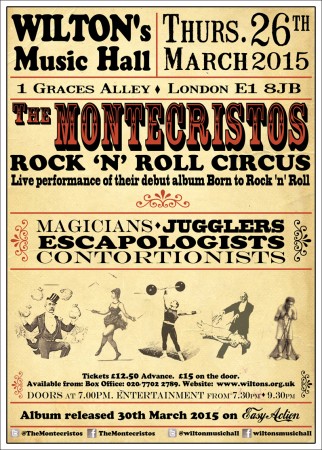