Pusher are co-headlining the inaugural ‘Gigslutz Presents…’ night on Saturday 18th July at the New Cross Inn, London. We caught up with Tom and Nevyn from the band to discuss their new 7″ ‘Here She Comes’, festivals and being lumped in with the psychedelic scene…

Hello Pusher, what have you been up to this week?
Tom: We shot our video for the A & B sides to our vinyl release, ‘Here She Comes’. Great fun. When you watch the video you’ll see why.
Nevyn: We hope it will show a lighter side to Pusher. Maybe people will think we’re not just miserable fuckers – which we know we are – but we do laugh occasionally. We also played Adelphi in Hull on Wednesday night, which was another date in support of the 7″ release.

You released the 10,000 Hours EP in December last year. What did you take from the experience of recording this record?
Tom: It felt good to get the songs we had at that time out as a collection, so people had more to get their teeth stuck into, rather than just a single. It showed where we were then, but we all feel we’ve come on a long way in songwriting since.

Artrocker described your sound as a “heavy, psychedelic sonic assault”. Do you agree?
Tom: Personally, I don’t see the psychedelic aspect to our music at all anymore. Perhaps in the past we may have dipped our toes in the psych pool. If that’s how they see us then fair play, but I think there’s more to it than it being psych, as most psych bands these days are boring as fuck.
Nevyn: The review was complimentary to us and I can see how certain songs have aspects of psychedelia, but I think the word has a certain stigma attached to it. We’re far more than a psych band, each song has greater intricacies,;we don’t want people to pigeon-hole us. It’s frustrating sometimes to read reviews and see words like ‘psych’ being used. I mean, to me, reading that quote and attempting to picture a sound would be impossible.

You released ‘Here She Comes’ on 7″ Vinyl  at the end of June. Are you doing anything to mark the release?
Nevyn: ‘Here she Comes’ is vinyl number two for us. We’re proud to have our music in physical form, and to have it on vinyl is great; it’s proper. It’s a bookmark, but we want many, many, more records out there.
Tom: We still have the rest of the summer dates to take care of, as far as the promotion side goes. To celebrate, we’ll just take our shirts off and hug in a hot, poorly lit room. I think that’ll be the best option.

You played at The Great Escape Festival in Brighton earlier this year. What was the highlight of your weekend?
Tom: Our good friends The Tapestry played the same venue as us, so that was mega. We’ve known them for just over a year now and we’ve become good friends. And they’re also a top band – definitely worth checking out. Playing alongside them was our highlight, I reckon.
Nevyn: It was a good experience, both acoustic and electric. Catching up with our mates The Tapestry was good. I don’t think we’ve managed to meet a more compatible set of people whilst gigging. They are top, both personally and professionally.

You recently played at The Isle of Wight Festival too. How did it go?
Tom: It was a good weekend, but unfortunately we clashed with Fleetwood Mac, so our crowd wasn’t as good as we’d hoped. We were playing a festival of that size when everyone’s watching them obviously, and who can blame them? We caught the last hour after we chucked our gear back in the van. Overall, we enjoyed ourselves.
Nevyn: Fleetwood Mac were a very emotional end to the weekend; ‘Landslide’ was hard to get through! There were a lot of bands I think we all intended to see, but of course you get carried away doing whatever. Blur and Charlatans were good, though Blur did have me contemplating gas prices for some reason . . . Weird.

You’ve played acoustic and electric sets whilst touring the UK recently. Do you think it’s a testament to your song-writing that you can easily transcend the acoustic/electric barrier?
Nevyn: Our songs are generally written on acoustic guitar, or piano, so to play them in that environment is something that Gilroy, and myself really enjoy. In terms of the song-writing, some of the songs we write aren’t necessarily meant to be a full band, an acoustic and an electric can be all that is needed, so it gives us an opportunity to play songs that wouldn’t usually find themselves in a full band set.

We’ve interviewed The Tapestry, who you’ve gigged with before, and who you’re playing  the first ‘Gigslutz Presents…’ show with in London on July 18th. They spoke fondly of you, describing you as “absolutely ace” and as daft as they are. What can we expect from you on the 18th?
Nevyn: They’re ace too; on a personal level, they’re by far the soundest band we have come across over the past 18 months and 70-odd gigs we’ve done. We’re able to openly discuss our frustrations/jubilations regarding musicianship – or anything for that matter – as well as sharing the same sort of humour, which is specific to say the least. Musically, they are great. Their tunes are proper, and they know how to craft a real pop song. They deserve it. So, yeah we’re looking forward to catching up with them and having a good night.
Tom: Very true. We both just get giddy when we’re around each other. It’s hard to describe, so you’ll just have to come down on the 18th and see for yourself.
Nevyn: It’ll be boozy. 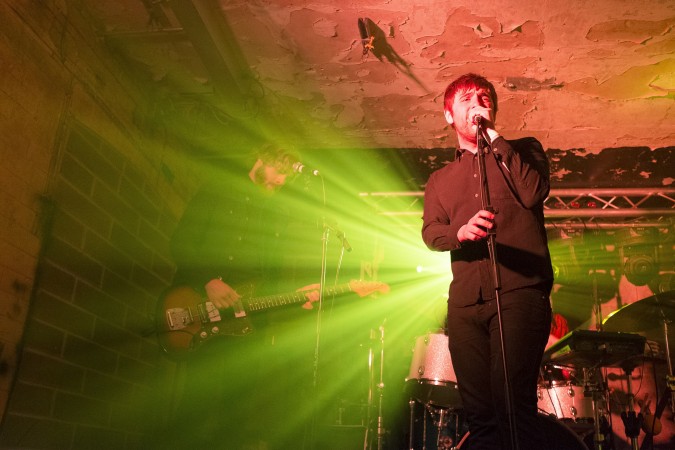 What bands are you looking forward to seeing later in the year?
Nevyn: Father John Misty’s in Sheffield soon. I’d go just to see ‘Bored in the USA’. Mark Lanegan’s over again this summer. I’ve never seen Elbow properly, and would love to.
Tom: From a new band perspective, honestly, no one. There’s too much shit around at the minute, and it all sounds the same. We like to think we’re away from that.

Finally, what does the future hold for Pusher?
Tom: If all goes well; being 50, sat in a working men’s club, going through our 4th divorce and telling people: “I used to be in a band once”.
Nevyn: What Tom said, that’s the dream.

Ones to watch: The Mynabirds