Following their energetic and spirited performance at Calling Festival on Clapham Common, Matt Tarr and Rachael Tarr caught up with Isaiah Radkey, bassist and backing vocalist of the Missouri punk three piece, Radkey to discuss their live set, musical influences and what we can expect from them in the near future.

MT: You have just finished playing on the main stage here at Calling Festival through a typical British downpour which saw you slip over a few times. How do you feel the set went overall?

IR: I feel like it went really cool man. It was wet and slippery but you know you just got to make it work. I tried not to miss any notes, tried not to hurt myself too bad. My leg hurts pretty bad but whatever. 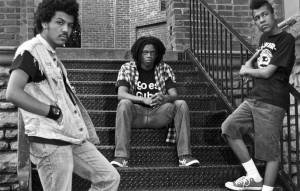 MT: Is this the first time you’ve played in the UK outdoors or have you done any festivals before?

IR: We’ve been over here quite a few times, maybe this is the fifth or sixth. We played Download last year. It wasn’t raining, that was weird. Today was the first time we’ve ever played in the rain, while rain was actually hitting you.

MT: You’ve got the Devil Fruit EP out at the moment and you’ve done the live Spotify sessions which we’ve been listening to, both of which are recommended listens. How do you feel the reaction in the UK has been with these two releases?

IR It’s been really good; it’s really cool that it’s been taken in so well. I feel like everyone appreciates guitar music over here a lot more, you know.

MT: In the bios on your website you mention that you’re into computer games, anime and things like that. Is that something that you feel is reflected in your music?

IR Yeah, yeah we wrote songs about an anime called ‘One Piece’. It’s our favourite.

MT: Talking about your love of computer games, for me your sound reminds me of the soundtrack to Tony Hawks Pro Skater 3 which featured a lot of punk bands like Suicidal Tendencies and The Ramones. Did you ever play that?

IR: Yeah Tony hawk 3 was the one. That’s one of the main ones I played. The first one as well but not really the second one. Underground 2 was good.

MT: Would you agree that listening to bands like Suicidal Tendencies influenced the Radkey sound?

IR: Yeah, I mean we love punk rock and stuff. Our top 3 influences would be Nirvana, Led Zeppelin and The Ramones. That’s like the main ones and it covers all the bases really.

MT: During your set you mentioned that the track ‘Feed My Brain’ is about a teacher having a relationship with their student. Is the song based on true events?

IR: As a home schooled child, I would say no. That’d be weird. I like writing weird dark creepy stories, its fun.

RT: Would you say you were the main song writer in the band or do you all collaborate?

IR: We definitely collaborate a lot. Sometimes I write all the lyrics, sometimes Dee will, you know it just depends on who’s coming up with the best things for the song.

MT: If you were headlining the festival today, which bands would you have supporting you?

IR: Queens of the Stone Age and Foo Fighters, I don’t know which order but maybe they could hash that out.

MT: Are they bands you listen to regularly?

IR: Yeah, my first rock song was Monkey Wrench when I was, I don’t even know how old, maybe 3 or something or 4. I still remember it though.

MT: What else can we expect from you over in the UK during the rest of the year?

IR: I think this is our last trip for a bit. We’re going to be here hopefully some time next year and because we’re putting our full length album in January, so that’s half way done. I’m really excited. I’m sure we will do a big tour or something; it’d be weird if we didn’t.

With the buzz about these guys spreading, expect to see a big UK tour early next year with the release of their debut album. To keep up with all the latest news and updates from Radkey, follow them on Twitter @Radkey